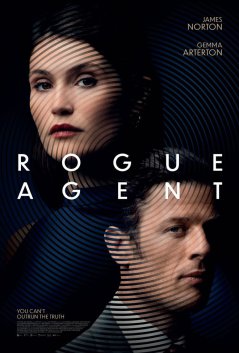 ROGUE AGENT is a good old-fashioned

thriller --- based on a true story. Robert Freegard was a con man extraordinaire, and who better to play him than James Norton, with all his boyish charm.

In 1993, Freegard is working as a bartender in a small English town. He manages to convince three students, Sophie Jones (Marisa Abela), Mae Hanson (Freya Mavor) and Ian Preston (Rob Malone), at the local agricultural college that he is an undercover agent for MI5.

Freegard explains that he is there to expose two fellow students for their involvement with the IRA. After a few missions, Freegard then informs the trio that they’ve been compromised and must escape in the middle of the night --- leaving everyone and everything behind.

Fast forward to 2002 and Freegard is now working in a luxury car showroom as a salesperson. He meets Alice Archer (Gemma Arterton), a very successful lawyer and feeds her the same story. At every turn he catches her off guard until she finally begins to trust him. When she eventually falls for him --- and I mean, who wouldn’t, it’s James Norton --- they plan a life together. Then he simply disappears with all her money. Now, Alice is bound and determined to bring him down.

We all would like to think that this would never happen to us. But there are individuals out there who possess those rare qualities which make others do stupid things.  Alice Archer was no dummy --- she even had a private investigator check into Robert’s past. Evil does exist though and Freegard is a prime example.

Norton is perfect to portray a con man. His looks and demeanor are believably disarming --- and he’s a great actor. When Robert stands Alice up for a dinner date, then begs forgiveness because his father had a medical emergency, of course she believes him. Norton makes Freegard credible.

And the beautiful Arterton is utterly convincing as Alice. She puts up with overbearing men all day in her profession, so it’s understandable that she would fall for a charismatic schemer who always stays one step ahead of her. She and Norton have amazing chemistry, and even though the audience knows the score, we can’t help but hope that Freegard will change his ways and settle down with Alice, but alas, no.

A well-written thriller is always a welcome option. Writers/directors Adam Patterson and Declan Lawn adapted an article by Michael Bronner about Freegard which he had penned years earlier. It’s an engrossing tale of supreme manipulation by an unscrupulous character --- and it’s a true story!

A man poses as an agent in the UK’s domestic counterintelligence/security agency known as MI5 (Military Intelligence, Section 5) and in the process dupes many people for his own financial gain. The man is Robert Freegard and the actor playing him is James Norton, one of Jeanne’s favorite British stars.

ROGUE AGENT is based on the real-life exploits of Freegard over a 10-year period from 1993-2002. While the film doesn’t dwell on his arrest, trial and conviction in 2005, it does live up to its billing as a crime thriller. Norton, of course, is presented as a handsome version of Freegard who manipulates his marks and their families without remorse.

One of his last intended victims, Alice Archer, is portrayed in the movie by Gemma Arterton. It is Archer who suspects his behavior is not legitimate and eventually puts into motion the events which cause his downfall. Her strong female resolve will appeal to women cinephiles everywhere.

At times Freegard’s character reminded me of Matt Damon’s Tom Ripley from THE TALENTED MR. RIPLEY (1999) in the sense that someone so charming can fool even the most educated people, although that film is based on a work of fiction.

Norton is masterful in the role. Thanks to his talents, plus that of writers/directors Declan Lawn and Adam Patterson, ROGUE AGENT builds suspense nicely as the truth unfolds about Freegard. Michael Bronner’s unpublished article about Freegard was the impetus for the eventual movie.

ROGUE AGENT is Lawn and Patterson’s first feature length movie as directors. It is not a stretch to say that this film has Hitchcockian assets that will keep most fans of suspense thrillers satisfied.