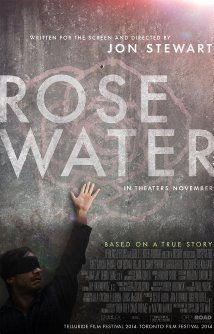 The interrogator responsible for the torture of BBC and Newsweek  journalist, Maziar Bahari, during his 118 days in Evin Prison in Tehran, identified himself only as "Rosewater". Based on Bahari's best-selling memoir "Then They Came For Me: A Family's Story of Love, Captivity and Survival", and written and directed by Jon Stewart of "The Daily Show", "Rosewater" brings this incredible and true story to life on the big screen with spectacular precision.

In June 2009, Iranian-born Bahari (Gael Garcia Bernal), currently living in London with his pregnant wife, Paola (Claire Foy), travels to Tehran to interview the challenger in the upcoming presidential election, Mir-Hossein Mousavi. While there, Bahari is actually interviewed by Jason Jones of "The Daily Show with Jon Stewart" for a segment in June about the election in Iran.

Anyone who watches the show knows that their "correspondents" are actually comedy writers and performers --- and that the show is a satire. Unfortunately for Bahari, the Iranian government sees his interview with Jones and believes he is, indeed, a spy. Bahari also submits camera footage to the BBC of riots in the streets of Tehran protesting the "stolen" election. Thus, he is arrested and taken to Evin, where he is subsequently tortured by Rosewater (Kim Bodnia).

Protesters and journalists are captured and suffer torture much too often. Part of what makes this story so compelling is that Bahari's father and sister were both imprisoned and endured horrific abuse at the hands of their tormentors, also in Iran. And though Bahari is not harmed greatly physically, the mental anguish he endures is overwhelming.

Stewart, and his cast and crew, also felt a great responsibility for Bahari's incarceration. No one, for a minute, believed that the Iranians would actually think that their comedy bit would endanger Bahari's life. Consequently, Stewart was obsessed with keeping this story alive on his show nightly, and along with the heroic efforts of Bahari's wife, eventually he was released in October 2009.

Bernal is exemplary as Bahari. His conversations with his now-dead father and sister, played here by Haluk Bilginer and Golshifteh Farahani, respectively, are heart-wrenching and insightful. One simply cannot begin to imagine what it would be like to be subjected to solitary confinement, which is how Bahari spent his 118 days. But Bernal gives us a comprehensive glimpse of his terrible plight.

One absolutely beautiful and incredibly moving scene has Bahari dancing in his cell to music only he can hear, while his captors watch him in wonder. How can a man in such dire straits find comfort and joy in his own head? It's a glorious moment in a brilliant portrayal.

Thankfully, it is Stewart who decided to take Bahari's book and turn it into a film. In anyone else's hands, it could have turned maudlin, but Stewart manages perfectly to infuse enough humor into his script to keep it from becoming so.

"Rosewater" is a triumph for Stewart. I imagine that after so many years on Comedy Central doing his four-night-a-week stint, he was aching to do something different. Writing and directing your first film so well must fill that bill.

In 2009, a seemingly innocent skit on Jon Stewart's "The Daily Show", intended to be a comic part of the usual satire, turned ugly. Iranian-born journalist Maziar Bahari, in Tehran to cover the presidential election for Newsweek, sat down with "Daily Show" writer/reporter Jason Jones. Jones, posing as a spy, implicitly linked Bahari to espionage activity, as well.

When the Iranian authorities witnessed the interview, Bahari was arrested at the home of his mother, and placed in solitary confinement where he was blindfolded and interrogated over a period of four months. Through all the mental and physical anguish he suffered, he never fell prey to his accusers' tactics, always resisting the temptation to sign a confession.

"Rosewater" is a very good film, not only considering it's Stewart's screenwriting and directorial debut, but because it places us right in the middle of Bahari's dilemma. It also brings attention to similar predicaments of thousands of journalists all over the world, guilty only of "bearing witness" to certain events, although the film does not address what is or is not being done on their behalf.

"Rosewater" is a significant achievement by Stewart. His guilt about Bahari's arrest --- coupled with the book Bahari eventually wrote about his ordeal --- was the impetus for getting the film made.

Stewart cast Gael Garcia Bernal as Bahari, and he is terrific in the role. The supporting characters, especially Shohreh Aghdashloo ("House of Sand and Fog", "The Stoning of Soraya M.") as his mother, and Golshifteh Farahani as his sister, are also excellent.

Bernal embodies just the right amount of puzzlement and fear of his situation, then ultimately joy. The best scene in the film shows Bahari dancing in his cell after speaking briefly with his wife for the first time since his imprisonment. He knows with certainty that people on the outside are acting on his behalf.

That's part of the beauty of this movie. As Bahari endures interminable day after day in prison --- and the days are superimposed on the screen as they elapse --- we are wondering why his family and others are not working feverishly to secure his release. Where is the indignation? What about the press? But eventually it explodes in a torrent of emotion as we are shown that all these entities had been working for him all along --- he was the only person who didn't know it.

Rosewater, called the "specialist" by his prison boss, is played by Danish actor Kim Bodnia. He is determined to break Bahari's spirit, but frustrated that he cannot get the confession he seeks. One line in particular says it all:  "You can't only take his blood, you have to take away his hope". Bodnia is well cast, an intimidating presence amid occasional glimpses of humanity and reason.

It is torture, although not in the traditonal sense of water boarding, for example. In fact, we witness only one scene of brutality, meted out by the reluctant Rosewater, who is following orders from his boss. However, the mental anguish is palpable, depriving Bahari of his senses when blindfolded during questioning, or sitting in a chair staring at a wall when not blindfolded.

It's almost inconceivable that a seemingly innocuous incident on a satirical television show could become an international story. Now it has been made into a compelling film that reveals much about the Iranian ideology, and the paranoia of its leaders. The world has indeed become a very intimate place.