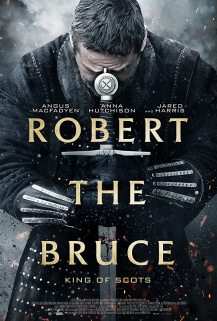 Angus Macfadyen portrayed Robert the Bruce in BRAVEHEART in 1995. He reprises that role in ROBERT THE BRUCE, the heroic story which begins in Scotland in 1306. Crowning himself King of Scotland, Robert the Bruce is unable to defeat the English after several valiant attempts. Wounded and trying to escape, Robert finds himself hunted by the very soldiers he once led. A bounty of 50 gold pieces has been placed on his head by King Edward of England.

You may wonder why a film about a long-deceased king is relevant --- or even of interest. But in this time of crisis we are currently experiencing, it is vastly important to understand what drove Robert the Bruce and his followers. They wanted their independence from England bad enough to forego everything. And now, 700 years later, we are presently sheltering in place to prevent the spread of a deadly virus and preserve our way of life.

Which proves people will do whatever is necessary for their survival.

ROBERT THE BRUCE is not a film about war. Rather it is a beautiful movie about deep loyalty, courage and ultimately the ties of family. Robert is near death when he is discovered in the snow near the croft of a peasant woman, Morag (Anna Hutchison), by her 11-year-old son, Scot (Gabriel Bateman).

Her husband died fighting alongside Robert the Bruce and now Morag is responsible for her orphaned teenaged nephew, Carney (Brandon Lessard), and niece, Iver (Talitha Eliana Bateman, sister to Gabriel), as well as Scot. They take in Robert and nurse him slowly back to health, endangering their own lives. When her husband’s brother, Brandubh (Zach McGowan), comes to take her and the children away --- and kill Robert, it is up to her small but mighty clan to save them all.

This is such a moving tale of heroism with a superb cast. Macfadyen, though as dynamic as he was in BRAVEHEART, takes a back seat here to Hutchison and her brood. She is marvelously feisty and an accomplished storyteller, while the younger set, especially Gabriel, is equally talented.

Directed by Richard Gray with a screenplay by Eric Belgau and Macfadyen, ROBERT THE BRUCE showcases stunning cinematography by John Garrett and a sumptuous soundtrack by Mel Elias. At 124 minutes it is perhaps a tad too long, but for those history buff cinephiles among us, ROBERT THE BRUCE is entertaining enough.

ROBERT THE BRUCE is being called the unofficial sequel to BRAVEHEART, 25 years after the famous Mel Gibson release. Angus Macfadyen is cast as Robert the Bruce, as he was in BRAVEHEART, and in this film, he is hiding from bounty hunters while recovering from battle injuries. The actor is the co-writer of ROBERT THE BRUCE, along with director Richard Gray.

A Scottish family led by mother, Morag (Anna Hutchison), her pre-teen son Scot (Gabriel Bateman), niece, Iver (Talitha Bateman) and her nephew, Carney (Brandon Lessard), collaborate to nurse Robert back to health. Along the way Robert teaches Scot the secrets of shooting a bow-and-arrow, along with his cousin Iver. This training will come in handy later.

Macfadyen plays Robert as the reluctant king-to-be, believing he has failed, and that God has not anointed him as Scotland’s leader should the Scots gain independence from England. As for Robert’s rehabilitation, the movie moves very slowly. However, it does manage to recover from its lethargy with a rousing final sequence reminiscent of BRAVEHEART.

One note of interest, the two Bateman actors mentioned earlier are real-life brother and sister. And Angus Macfadyen is no relation to Matthew Macfadyen of TV’s “Succession” fame, among many other credits. Character actor Patrick Fugit plays a murderous thug in the early part of the film, sequences which prove to be more intriguing than what is to follow.

winters, ROBERT THE BRUCE does not come close to the majesty and emotion that propelled BRAVEHEART to five Oscars in 1995, including Best Picture. As an historical vehicle, though, it does coincide with the 700th anniversary of the pronouncement of a free Scotland, known as the Declaration of Arbroath. I suspect this movie will have more meaning for Scots as opposed to the average moviegoer.