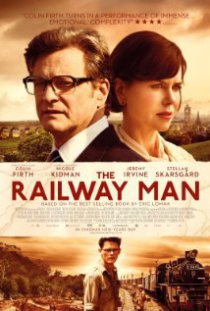 Atrocities of war are a shameful part of our world history, both past and present. Truthfully, we would prefer not to know, but there are thousands of men and women who live, silently, with these horrible memories. The unbelievable and true story of Eric Lomax and his horrific ordeal at the hands of the Japanese during World War II is the subject of "The Railway Man", based on Eric's autobiography of the same name.

Lomax (Colin Firth) had always had an enduring love for trains. Growing up in Edinburgh, Scotland, he spent many hours studying trains and their timetables, and watching them pull in and out of Waverley Station. So for him to end up as  a prisoner-of-war working on the Thai/Burma "Death Railway" becomes the cruelest of ironies.

Years later, Lomax meets on a train and marries Patti (Nicole Kidman), a woman who helps her husband break his silence about his torture during the war. They also learn through Eric's best friend and fellow detainee, Finlay (Stellan Skarsgard), that the Japanese interpreter, Takashi Nagase (Hiroyuki Sanada) responsible for his unbearable treatment, is still alive. It is imperative for Eric to confront him --- and possibly even kill him.

Screenwriters Frank Cottrell Boyce and Andy Paterson could think of only one actor to portray Lomax, and, of course, that was Firth. I completely agree. There simply isn't another actor who could possibly exude the elegance, sincerity and style that comes from Firth. Playing Lomax is a very difficult task --- so much emotion and drama --- that had it not been Firth, "The Railway Man" may have risked a less impactful outcome.

Kidman is quietly marvelous as Patti Lomax, a remarkable woman who certainly stood by her husband despite such dire circumstances. Kidman is truly one of the finest actresses of this generation, with a range that is undeniable. As Eric and Patti, Firth and Kidman make a lovely couple. Even the real life Mrs. Lomax was totally moved by their performances.

Though David was not as affected by this tragic story, I found it to be completely engrossing, devastatingly sad, but also incredibly redemptive in spirit. The fact that these two men, Lomax and Nagase, kept in contact for the remainder of their lives is an astounding testament to the power of forgiveness.

I loved "The Railway Man", and I applaud Eric Lomax for bringing his pain and hardship to light.

The "Death Railway" of World War II linked China to India, and it was deemed important by the Japanese military as part of its Burma campaign. Japanese prisoners of war, including many Brits, worked to construct it under deplorable conditions --- 16-hour days in 104 degree temperatures and 98% humidity. They were under-nourished, tortured and beaten at the whim of their captors. Survivors were reluctant to tell of their captivity.

Among the prisoners was Scottish-born officer Eric Lomax. His best-selling 1995 autobiography is the basis for "The Railway Man" starring Colin Firth and Nicole Kidman. It's a reasonably moving account of the tortures he suffered, and his eventual meeting, after the war, with his chief tormentor, Takashi Nagase, an interpreter at the time. Lomax had pieced together a radio for which Nagase questioned and tortured him endlessly.

Personally, I was expecting much more of an impassioned reaction given the storyline of "The Railway Man". It sounded like it had the makings of a gripping, highly-emotional confrontation between two men who, decades earlier, were sworn enemies. It's a story about a man filled with hatred and bent on revenge, who manages to ultimately find forgiveness. Yet I wasn't bowled over by the film.

The movie starts off well with a chance post-war meeting in 1980 between Lomax (Firth) and his future second wife, Patti (Kidman) on, ironically, a train. During their conversation they even mention the 1945  film "Brief Encounter" (one of my all-time favorites) where two people, married to others, meet in a train station and fall in love.

The two enjoy an amiable chat, and although they both sense something special has transpired, they separate when the train arrives at their destination. Lomax, however, urged on by his support group of fellow post-war prisoners (including Stellan Skarsgard as Finlay), comes to his senses and tracks Patti down, never to be apart again.

Flashback to 1942, and we meet the younger Lomax (Jeremy Irvine, Albert of "War Horse" fame) solidly entrenched in the Japanese prison camp in western Thailand. He and his fellow detainees are feeble, sickly and physically abused by Nagase (the younger is played by Tanrah Ishida). Included in Lomax' maltreatment are scenes of  prolonged water torture, which are uncomfortable to witness, to say the least.

He survives, of course, but his experience is buried deep within his psyche, hidden from Patti. When his story is finally revealed to her, and Lomax discovers that Nagase is alive, he plans a trip to confront him. The now-older Nagase is portrayed by veteran Japanese actor Hiroyuki Sanada ("47 Ronin", "The Wolverine").

When you consider the long-smoldering rage within Lomax, and his self-confessed desire for retribution against Nagase, their eventual meeting is rather tame. Yes, Lomax turns the other cheek, replacing the loathing in his heart with compassion, but as it plays out on screen, I found it less than compelling.

"The Railway Man" is yet another chapter in the long saga of man's inhumanity to man. Maybe Ishida summed it up best when he said "The Emperor was the god and you had to give your life to him. There was no you." Like Nazi soldiers devoted to Hitler, the Japanese army likely dispensed with any personal reservations they may have had when meting out their brutality.

Lomax died in late 2012 at age ninety-three, and never saw the completed film recounting his nightmare. But the wheelchair-bound army veteran lived long enough to visit the set where two distinguished actors were portraying him, and his beloved wife, Patti, still alive today at seventy-six.