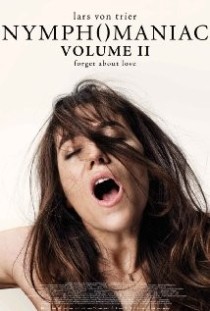 Though I rather liked "Nymphomaniac: Volume I", I found Lars von Trier's follow-up to be self-serving and supremely predictable. Why von Trier felt it necessary to make this odyssey into two movies is a mystery, with only he knowing the true reason.

"Volume II" obviously takes up where "Volume I" left off. Joe (Stacy Martin) is still exploring her sexuality. She is living with Jerome (Shia LeBeouf --- another mystery in casting) and, for some odd reason, Joe is now being played by Charlotte Gainsbourg, who in NO way resembles Ms. Martin, which I believe David has already pointed out --- but I digress. I realize she is portraying the "older" Joe, and yet von Trier doesn't change the actor for Jerome (Michael Pas) until later in the film. Puzzling ---

Another source of bewilderment is why on Earth would von Trier have Joe get pregnant and give birth? We are already firmly convinced that she is too self-absorbed to have a child, so why bring a baby into this mix?

It is not enjoyable to watch a toddler left alone to fend for himself while his father is working, and his mother is succumbing to sadomasochism. We get it --- Joe is a crazed nymphomaniac --- stop beating us over the head.

Stellan Skarsgard has returned as Seligman, the morose bachelor who sits up all night listening to Joe's tales of woe --- and less-than-thrilling sexual escapades. What really surprised me was von Trier's choice of endings. He clearly thought his final scene would be a statement --- a punctuation to all that had come before --- a shock, even. I found it to be ridiculous and annoyingly foreseeable. So much for the enigmatic Mr. von Trier.

After watching the first installment of this series just a few weeks ago, it was mandatory to see where director Lars von Trier would take his story. We didn't have to wait long to find out that Joe (Charlotte Gainbourg), the self-avowed nymphomaniac, relates her masochistic side in a startling series of visits to a sparse "office" run by a sadistic young man known as K (Jamie Bell of "Billy Elliot" fame).

She goes there because, now living with Jerome (Shia LeBeouf) and their son, she has lost her ability for sexual  gratification. She hopes to find fulfillment as she endures brutal whippings and other forms of degradation at the hands of K. It's not easy to watch, as the blood and red welts on her body seem real enough.

K even labels her personal whip "Fido", his pet name for her, which he presents to her as a Christmas present.

Joe continues the retelling of her life to Seligman (Stellan Skarsgard), and we see more of Joe as a young woman (Stacy Martin), although I still can't shake the peculiar casting by von Trier since neither actress looks remotely like the other. To further compound the judgment of von Trier's choices of actors, he cast Belgian Michael Pas as the older version of Jerome, but Pas looks as much like Shia LaBeouf as I do. What, they couldn't make LaBeouf look older with make-up? At this point, perhaps von Trier is playing psychological games with these casting decisions.

"Nymphomaniac: Volume II" is intriguing on its own merit, since some issues are answered. We find out how Joe ended up bloodied in the alley where Seligman found her, and as revolting as the S & M scenes are, they are strangely compelling, at least from a voyeuristic point of view.

But "Volume II" pales in its storyline compared to the initial installment, The only remaining question of the series is the outcome of the relationship between Joe and Seligman, the avowed virgin. Is Seligman sufficiently aroused by Joe's tale? Will Joe add Seligman to her long list of sexual conquests? I can tell you it is shocking, but not necessarily surprising.

This film is salacious and daring. And it pushes the envelope of cinematic decency. But consider this: "Volume II" was nominated for six Bodil Awards, Denmark's version of the Oscars, including Best Picture and two Best Actress nods for Gainsbourg and Martin. Gainsbourg was the only winner from the "Nymphomaniac" series, while Thurman was nominated as Best Supporting Actress for her role as Mrs. H in the superior "Nymphomaniac: Volume I". She lost, but it's a memorable performance.