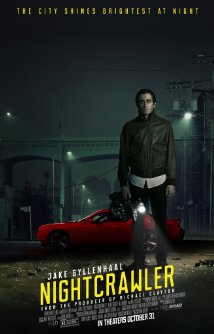 Jake Gyllenhaal has a knack for selecting good scripts, and he has chosen a winner in "Nightcrawler". It's a fast-paced, action-packed thriller that delves into the seedy business of independent camera crews scouring Los Angeles in search of mayhem and mishaps they can film, and then sell to TV stations.

Gyllenhaal plays Lou Bloom, an out-of-work petty thief who stumbles onto one such crew --- "if it bleeds, it leads" --- and suddenly he's hooked. Forget the small larcenies of stealing a security guard's watch, or accumulating metal for salvage resale --- this new occupation promises to be very rewarding.

An admitted fast learner, Bloom, along with his unwitting sidekick Rick (British-born Riz Ahmed), quickly make enough money for Lou to buy a fast new sports car, a new camera and a spiffy police scanner. Rick is his navigator/assistant cameraman, but severely underpaid at $30 per night. As Lou's right-hand man, Ahmed is terrific, playing the frequently-reluctant, often-terrified passenger of Lou's speeding Dodge

Writer ("The Bourne Legacy") and first-time director Dan Gilroy perfectly cast his wife, Rene Russo, in the role of Nina Romina, the TV news director at the LA station where Lou brings amazing footage of crime and accident scenes. At first he is paid modestly by Nina, but desperate to keep her job, she finds more and more money in her budget to keep them both happy. And although she is quite older than Lou, the two share an implied physical relationship which has its own level of intensity.

Driven by greed and an entrepreneurial obsession, Lou is offered a job by  nightcrawler veteran Joe Loder (Bill Paxton). He refuses. Nothing and no one will stand in his way of getting the ultimate footage, even if it means crossing the line of decency and legality.

"Nightcrawler" is filled with suspense, which builds rapidly as Lou's obsessive behavior grows exponentially. While the story's major plot development plays out, which I won't reveal here, the tension is irrefutable. Even after the primary action sequences have concluded, Gilroy keeps the audience in his grip. It's remarkably photographed and edited, and Gyllenhaal's magnetic performance is center stage. You literally cannot take your eyes off the actor.

He brings an ultra creepy demeanor to his character ---- slick, smooth-talking and very persuasive --- emitting the bold cockiness of a veteran con man. His performance may be on the cusp of best actor recognition.

Gilroy has achieved a gritty realism with "Nightcrawler". For the after-dark scenes with Lou and Rick, the director has imbued his actors' eyes with an eerie pale glow that suggests more than a hint of evil. His use of actual television news anchors and programming protocol gives the film true authenticity. While the movie may have some flaws,  they are not enough to detract from the overall excitement and seamless action.