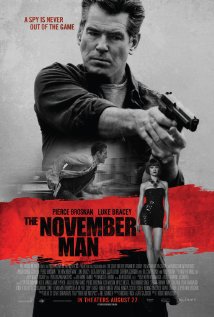 Everyone has their favorite 007 --- Bond, James Bond. For many it's Sean Connery, for others it's Daniel Craig (gag), but, for me, it will always be Pierce Brosnan. Brosnan exemplified everything Bond should be --- handsome, suave and oh-so-debonair, plus no one looks better in a tuxedo.

But all of that has passed, and "The November Man" has Brosnan playing Peter Devereaux, a former CIA operative lured out of a cozy retirement in Lausanne, Switzerland to save his one-time lover, who has become the assistant to a Russian general, next in line for the presidency. This guy is a real charmer --- a Chechnan war criminal harboring a past littered with dead young girls who were slave traded out of Chechnya.

Of course, nothing is ever simple --- a run-of-the-mill rescue op --- and now Devereaux is being hunted by his previous protégé Mason (Luke Bracey). Also in the mix is a beautiful social worker, Alice (Olga Kurylenko), who has been aiding refugee women to get out of the sex trade, and is herself a target of a ruthless Russian hit woman.

Yes, there is a lot going on in "The November Man", not all of it good, but enough to keep it interesting. Early on in the movie, Devereaux warns Mason of the dangers of an intimate relationship --- a cardinal sin we learn he himself ignored. He tells Mason if he wants a relationship --- get a dog.

"The November Man" is not an Ian Fleming disciple. Brosnan, though still handsome, has grown grayer and longer in the tooth. Instead of swilling martinis, he's drinking whiskey out of a stranger's liquor cabinet and hotel mini bars. But Brosnan still maintains that certain appeal --- he's manly, diabolical --- and we always want him to get the girl.

And the girl in this case, Kurylenko, is a knockout in stilettos and a barely-there mini dress. She's gorgeous with or without make-up --- not an easy accomplishment. Unfortunately, her end-of-movie revelation isn't difficult to figure out, but that doesn't diminish our empathy for her character.

It's Labor Day Weekend --- and the end of the summer blockbuster season. If you're exhausted from all of the comic book sequels, and looking for something less cerebral with more action than "A Man Most Wanted", "The November Man" will keep you entertained, especially if you're a spy thriller junkie like me.

Pierce Brosnan is too long in the tooth to play James Bond again, and he's probably too old for his latest role as "The November Man", but who cares? His character, Peter Devereaux, is an ex-CIA operative on a dangerous mission that finds him hunted by his former organization, led by his former protégé. The bodies pile up as Devereaux encounters a variety of thugs, and his always-successful hand-to-hand combat belies the fact that he is a 61-year-old man battling younger foes.

But Brosnan pulls it off in what is a zinger of a film. We are immediately vested in the story from the opening scene, and there is no let-up from that point. Naysayers will point out that Devereaux always avoids bullets coming his way, and he always hits his targets, moving or otherwise, before they can draw a bead on him. If you can get past these kinds of absurdities, prepare yourself for a giddy ride.

Brosnan shares the spotlight with a relative newcomer, Australian-born Luke Bracey who plays David Mason, Devereaux' former CIA pupil. Bracey is an effortless actor, and with his good looks, we should see a lot more of him on the screen.

Ukrainian-born actress Olga Kurylenko ("Quantum of Solace" opposite Daniel Craig) is Alice Fournier, a beautiful social worker who finds herself in the middle of a plot to disparage the reputation of a popular Russian politician, Arkady Federov (Lazar Ristovski). Federov, despite his shady past as a military general with involvement in the Chechen War, appears to be in line for the Russian presidency. And both the CIA and Devereaux are anxious to make contact with Federov, albeit for different purposes.

Another key player is CIA agent John Hanley (Bill Smitrovich), a long-time colleague of Devereaux. He is a big, burly guy you'd want on your side, but whose side is he really on?

Aussie director Roger Donaldson is no stranger to action films ("The Bank Job", "The Bounty"), and his 1987 thriller, "No Way Out" with Kevin Costner and Gene Hackman, scored 90% on Rotten Tomatoes. This screenplay by Michael Finch and Karl Gajdusek keeps the action fast and furious, but with appropriate lulls, as well.

Despite the logistical loopholes, "The November Man" is unpredictable, suspenseful and very entertaining. And Kurylenko looks spectacular in a red wig and black sequin mini dress.