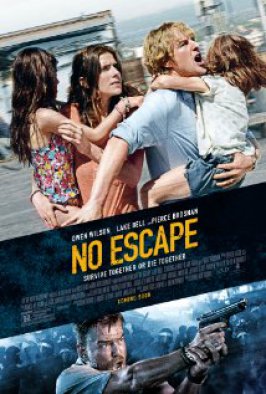 A big risk for filmmakers, director/writer John Erick Dowdle and his co-writer/brother Drew, because "No Escape" could have gone either way --- bad or good. And, at 103 minutes, it came very close to capturing the "bad" moniker. Had they shortened its length by one less horrible life-or-death escape by the Dwyer family, "No Escape" may have even qualified for really good.

Jack Dwyer (Owen Wilson) and his wife Annie (Lake Bell) have left Austin, Texas in search of a new life --- and a new career for Jack --- in Southeast Asia. Why anyone would drag their five and seven-year-old daughters, Breeze (Claire Geare) and Lucy (Sterling Jerins) to a third-world (fourth --- as stated by Annie) country to set up house is beyond me, but hey, it makes for an interesting premise.

Seventeen hours prior to the Dwyer family's arrival, the premier of said country (never actually named) is murdered, and a coup begins in full force upon their landing. People are slaughtered in the street --- the violence is rampant. And Jack is particularly targeted because he was brought to this country to work for the evil corporation, Cardiff.

Lucky for Jack and his loved ones, while on the plane ride over, Breeze engages a crusty, seasoned sort named Hammond (Pierce Brosnan). He is staying at their hotel and offers them a lift, courtesy of "Kenny Rogers" (Sahajak Boonthanakit), a Kenny Rogers-loving associate. This friendship will prove life-saving in the near future --- a brief length of time filled with massacre and brutality.

"No Escape" is an exercise in near futility. Everywhere Jack and his family turn, everyone is being mutilated and killed. There is little respite from the onslaught, which makes "No Escape" exhausting. Plus the brothers have employed director of photography Leo Hinstin, who utilizes a hand-held camera, so by the end of the film I was also nauseated.

The buzz surrounding "No Escape" involved a lot of jokes about Wilson tossing his daughters in the film from one rooftop to another. But that is only half of the peril these two young girls must endure. Seriously, if these darlings aren't in therapy for the rest of their lives, I will be amazed. "No Escape" includes some serious s**t --- bludgeoning, shootings, people run over, dog-eating and potential rape --- so it's difficult to imagine that any parent would allow their daughters to participate.

But Geare and Jerins are troopers --- and really good little actors. Had they not been, "No Escape" would be a grand failure. Having Bell as your on-screen mother does help, because she is exceptional. I would have smacked Jack from here to Sunday, but her patience is palpable and believable. Bell does not get enough credit, nor good roles. A true shame.

Wilson, for all of his light-hearted ways, plays Jack with a fierce bravado, as yet unseen in his other performances. And still his warmth and jovial nature comes across as the loving father and husband. It was refreshing, though, to witness him beat the crap out of a murdering terrorist. And what does that say about me?

The Dowdle brothers had a very difficult time getting "No Escape" made. Many of their potential backers declined because of the extreme violence, and the fact that two little girls were part of the mix. "No Escape" is a wild, heart-pounding, non-stop thriller --- brace yourself.

Jack Dwyer has uprooted his family from Texas to an unspecified place in Southeast Asia. He's an engineer with an American company responsible for the country's water system. The natives think the U.S. is trying to enslave them by controlling their water supply.

Jack (Owen Wilson) discovers first hand that the rebels mean business. Leaving his wife, Annie (Lake Bell), and young daughters Lucy (Sterling Jerins) and Beeze (Claire Geare) at their hotel, he strolls out looking for a newspaper because the hotel's telephone, internet and electrical system are not working. "Welcome to the third world" Jack says to Annie. But when he encounters heavily-armored police walking in one direction, and rock-throwing, gun-toting rioters in the other, he is suddenly thrust into the middle of a full-scale revolution.

"No Escape" director John Erick Dowdle visited Thailand in 2006 where a coup had broken out, complete with tanks and a nationwide curfew. He was not affected by the turmoil, but wondered what it would be like for a family to be stranded in such a dire situation. So he and  his brother Drew co-wrote the script for "No Escape". It's an engrossing story, truly escapist entertainment, albeit of the darker variety.

The film does have its flaws, however. In one scene, the Dwyers are fleeing the chaos on a moped, searching for the American Embassy. Somehow, Annie manages to decipher its whereabouts --- on a foreign-language map, in the dark, while riding four-on-a-bike.

Some questionable dialogue accompanies white-knuckle action. When Jack orders Annie to leap from one rooftop to another to elude the gunmen, he tells her he'll then throw the kids to her one at a time. This comment elicited a huge guffaw from our screening audience.

A more egregious omission of the script had me wondering why Jack's company was not aware of the potential for violence. The top brass might have alerted him to the inherent dangers. And why didn't his hotel warn its guests of trouble brewing after the murder of its premier? Put another way, the audience is not adequately prepared for the ensuing carnage, other than possible repercussions from the assassination. It is only from the mysterious Hammond (Pierce Brosnan) that Jack learns what is happening. We're initially not sure what Brosnan's character is up to, bordering on mistrust. But ultimately he is the voice of reason, the comforting factor in a strange land, and Brosnan is perfectly cast.

There are certainly intense moments, scenes depicting how far parents will go to protect themselves and their children. I was reminded of Dustin Hoffman in the original "Straw Dogs", portraying an average guy finally fed up with being the victim, and rising up to confront his tormentors.

The overall acting is first rate. Bell, in particular, captures all the emotions of a distraught mother terrified with their predicament, yet drawing on adrenaline to ensure her daughters' safety. Wilson, obviously known for his comedic roles, is solid as the non-action hero who must find the means to protect his loved ones at all costs. And equally important, Jerins and Geare, playing the daughters, offer terrific performances. Anything less would have sabotaged the movie.

We never hear the rebels' point of view. They are portrayed only as sadistic savages, with no regard for human life. Their barbarism takes unexpected forms, as when four men are lined up on a street, apparently to be killed execution style. But, in one of those shots that lingers in the mind, they meet a different fate.

"No Escape" is a fast-paced thriller interwoven with quality down times. It delivers on its message that anything can happen, at any time, anywhere.