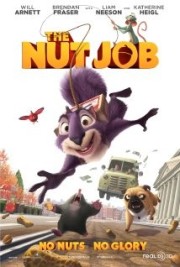 It's January and Liam Neeson has another crappy film out. Only this time he's just the voice of a rather nasty vermin, Raccoon, living in what appears to be Central Park in New York City.

"The Nut Job" is neither funny nor entertaining for adults, though kids may find it amusing. David and I love really good animated features, most recently "Frozen" being one of them. But "The Nut Job", even with its moral lesson, is tough to recommend.

Despite occasional brilliance in animation, "The Nut Job" is a movie for parents to avoid sitting through with their kids --- send your nanny --- then retrieve the gang after the show. The movie's premise --- there is not enough food for the local forest and park denizens (four-legged variety) to survive the coming winter --- relies on the lead squirrel, Surly (voiced by Will Arnett) to usurp the inventory at Maury's Nut Shop.

Opinion: Mild Wait For DVD (for kids 10 and under)