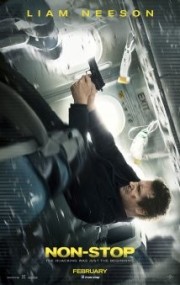 Liam Neeson is a fine actor, but his credibility took a severe hit with the preposterous "Taken 2" (2012). And if you believe my illustrious partner, Jeanne, "The Grey" (2011) was even worse. So the odds were in his favor to have a decent early-in-the-year movie, and "Non-Stop" is that film.

Bill Marks (Neeson) is a federal air marshal with some personal baggage --- no pun intended --- including the fact that he drinks a lot. When he finds himself on a transatlantic flight to London, he begins receiving threatening text messages from a passenger on the plane. But who? That is the crux of the story, and to the credit of all involved with the script, including director Jaume Collet-Serra, the culprit could be any of at least half a dozen people. At least, it kept me guessing till the end, although I suspect Jeanne, who missed this one, wouldn't find that so surprising.

The threat? Unless $150 million is transferred to a secret bank account, a passenger will be killed every 20 minutes. Of course, the logistics of actually killing someone on an airplane without being detected sound impossible, which is part of the fun. Plus the reality of a blackmailer demanding such a huge sum in such a short time? A stretch, to say the least.

"Non-Stop" works, though, despite some far-fetched moments and cliche writing. One big reason is that it doesn't take itself too seriously ALL the time. When the passengers are in an uproar over the strong-armed search tactics of Agent Marks, he calms them down with a promise of free international air travel for a full year. Oh, the greed of the American public!

Anyone who has flown since 9/11 has likely taken a stern eye to the passengers waiting to board, so any movie about a commercial airplane in peril will likely resonate with most people. The passengers in "Non-Stop" run the gamut from a small child, to a Middle Eastern-appearing man (a film like this must have racial profiling), to a New York cop, to a well-dressed businesswoman, to a young black man, expert in smart phone capabilities --- hmmm?

The movie features a good supporting cast that includes Julianne Moore, a bit of an oddball who must sit by a window, and Michelle Dockery (proving she can act outside of "Downton Abbey") as Nancy, a flight attendant, both of whom fall under the scrutiny of the air marshal. Current Oscar nominee Lupita Nyong'o also appears as a flight attendant, but with very few lines.

I kept looking for flaws and silly/stupid aspects (there were one or two), and despite some implausible scenes, it was entertaining, exciting and compelling. But the real clincher? Our screening audience erupted into a big ovation at the end, indication of a true crowd-pleaser.