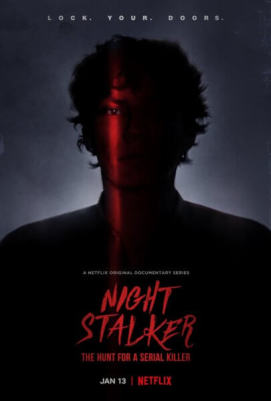 Imagine being a rookie homicide cop, son of Latino

Immigrants --- the first in his family to go to college --- and a legendary detective selects you as his new partner to solve some of the most heinous murders plaguing Los Angeles in 1985. Such is the case of NIGHT STALKER: THE HUNT FOR A SERIAL KILLER, a four-part docu-series beginning on Netflix.

In Episode One, Gil Carrillo, a Vietnam vet from East L.A., dreamed of becoming a detective for the L.A. Sheriff’s Department. In March 1985, as a rookie, three murders in 10 days grabbed his attention. Though there was no rhyme or reason to these killings, Carrillo suspected that they were committed by the same person. The only colleague who didn’t think he was off track was Det. Frank Salerno, who made a huge name for himself by solving The Hillside Strangler case in 1978. Impressed by Carrillo’s street smarts and tenacity, Salerno askes him to team up as the murder count rises in L.A.

Episode Two: The summer of 1985 was a scorcher for L.A. and on one of those hot nights, the killer breaks into a home which happens to belong to a sheriff’s deputy. Thankfully no one in is family was hurt, but the suspect did leave behind a shoe print which would become a vital clue in the investigation. After several more victims are attacked over the 4th of July weekend, the detectives can no longer keep the fact that a serial killer is out there and the media pounces.

Episode Three: Frustrated by the lack of cooperation between police agencies and funding constraints, Gil and Frank miss a perfect opportunity to catch their killer. As the number of victims rises, and one attack happens close to Gil’s home, his wife takes their children and vows not to return until The Night Stalker --- as he has now been dubbed --- is caught. In a surprise twist, a murder has been committed in San Francisco and Gil and Frank travel there to discuss the evidence with Police Inspector Frank Falzone.

Episode Four: Gil and Frank are finally able to identify The Night Stalker as Richard Ramirez, setting off a nationwide man hunt. Tips of sightings are coming in from everywhere, but when one man notices Ramirez on a bus, he quickly exits to call the police. Ramirez is finally cornered in East L.A. by a group of immigrant residents who hold him captive until the police arrive. NIGHT STALKER: THE HUNT FOR A SERIAL KILLER culminates in the trial and sentencing of Richard Ramirez.

Director Tiller Russell and his creative team, Tim Walsh, James Carroll, Aaron Saidman, Eli Holzman and Erin Gamble, by using Gil Carrillo and Frank Salerno as their anchors, have produced a riveting piece of filmmaking. These two veterans of law enforcement possess such remarkable memories for details, which is what makes this series so gripping.

These killings were all so random --- following no pattern whatsoever. The victims ranged from six to 82, male and female. We hear from survivors of this vicious maniac and members of the families of some of those murdered. One such survivor, who is now grown and married with children of her own, was six when she was abducted by Ramirez. Though she is able to relay her dreadful story, her pain and anguish after all these years is palpable. How could it not be?

Russell and his team are careful not to glorify Ramirez in any way. It was “profoundly important” to Russell that they not do that. They minimized his appearances in the series, choosing instead to focus on the two cops and the victims’ stories --- and it works. It’s gut-wrenching to listen to one granddaughter’s account of trying to convince her grandparents to lock their doors at night, to no avail. They would become his next victims --- so eerily prescient.

NIGHT STALKER: THE HUNT FOR A SERIAL KILLER is not for the faint of heart. The crime scene photos are graphic and disturbing. Ramirez was one really sick person. But if you’re obsessed --- or even remotely interested in real-life crime stories --- then you simply can’t miss this newest Netflix presentation.

It has been 35 years since one of the most heinous serial killers in American history was brought to justice. The story of The Night Stalker, as the media named him, is a Netflix docu-series that will appeal to crime junkies and anyone interested in the criminal mind. But director Tiller Russell did not want to glorify Richard Ramirez. Instead, he focuses his film primarily on the detectives who worked the case and the relatives of victims as well as survivors of this relentless predator’s reign of terror.

The Night Stalker earned his nickname because he broke into people’s homes --- totally at random --- in the middle of the night. Residents of California were under his horrific spell over a 16-month span that began in San Francisco in 1984 and escalated dramatically in the suburbs of Los Angeles in 1985. A young LA detective named Gil Carrillo was paired with legendary homicide investigator Frank Salerno to work on the case which they were convinced was the work of a single person.

NIGHT STALKER: THE HUNT FOR A SERIAL KILLER is largely told through the efforts of these two men who closely followed the killer’s path of mayhem and whose stealthy persistence led to his arrest. The docu-series is a brutal yet fascinating study of a self-proclaimed Satan worshipper whose victims included men, women and children ranging in age from six to 82.

Again, the docu-series does not dwell on the more lurid details of the murders --- although the photos from the crime scenes are graphic in nature --- but greater focus is placed on the step-by-step process of the detectives’ due diligence. As I mentioned, director Russell features heart-wrenching interviews with family members and even some potential victims who managed to escape.

The only major clue for months was the repeated footprint of a famous maker’s sneaker which was seen over and over at various crime scenes. This allowed the detectives to determine that they were hunting for a taller man wearing a shoe size of about 11 ½ inches.

As The Night Stalker saga gained momentum in the media, a determined television reporter named Laurel Erickson wanted to air a story alerting the public to the sneaker clue which, of course, infuriated Salerno and Carrillo. They worked out a compromise, so she agreed not to run it. However, Diane Feinstein, future Senator from California, is seen in archival footage at a press conference disclosing the case’s most intimate details when she was mayor of San Francisco, also hampering the detectives’ strategies.

At one point Ramirez, using the alias Richard Mena, was tracked to a dental office in LA’s Chinatown. The dental x-rays revealed an impacted tooth that practically guaranteed Ramirez would return to get it repaired. So, the LAPD stationed two Asian cops posing as patients in the waiting room in case he came back.

However, as time went by with no Ramirez appearance, the cops were replaced and instead a special alarm was installed which the dentist could use to notify police that Ramirez had shown up. The very next day, after the physical surveillance was called off, Ramirez returned to the dental office, but the alarm malfunctioned. The trail was lost, and the killer was still on the loose. This is just one of many events cited in the series that held Jeanne and me spellbound.

During the fourth installment of Russell’s series, we are privy to the court proceedings some three years after Ramirez’ arrest. This remorseless individual is seen almost gloating, and a close-up of his face and especially his soulless, piercing eyes can only be described in one word --- chilling! This didn’t stop some attractive female groupies from corresponding with Ramirez while he was on Death Row, including nude and semi-nude photos of themselves.

NIGHT STALKER: THE HUNT FOR A SERIAL KILLER is hard to turn away from because on some level we can all relate to the fear this madman wreaked over a long period of time. The series can be seen on Netflix beginning January 13th in four 60-minute episodes.