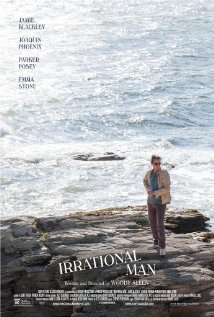 Shocking to admit, but Woody Allen's latest foray into psychological and philosophical thrillers isn't very compelling. He's obviously enamored with Emma Stone, casting her again, this time as a college senior who falls for her philosophy professor in a rather mundane examination of existentialism.

Abe Lucas' (Joaquin Phoenix) arrival at a small town college has sparked a great deal of curiosity and anticipation. All sorts of gossip is swirling concerning Abe and his eccentric reputation, and two very different women are immediately taken with him.

First is a science professor, Rita Richards (Parker Posey), who is so unhappy in her marriage it's a wonder --- and a flaw --- that her husband doesn't notice. Second, one of Abe's new students, Jill Pollard (Stone), is drawn to his tortured soul, and believes it is she who can rescue him from himself.

At first, Jill and Abe remain strictly friends because of Jill's long-time boyfriend, Roy (Jamie Blackley). But Jill's infatuation with Abe, and his romantic poetic traits, will not be denied, and predictably they become lovers. But, an overheard conversation between a distraught mother and her friends propels Abe into a course of action that will significantly alter their lives.

Allen's directing skills have not diminished in "Irrational Man", but his writing suggests a less-thought-out philosophical pattern than some of his  much better efforts such as "Match Point" (2005), which was brilliant and very tense, and "Crimes and Misdemeanors" (1989), another excellent film. Here, Allen seems only to be going through the paces --- there is no suspense, no real drama.

Even Allen's character development is off in "Irrational Man". Lucas is poorly created --- we feel nothing for him, nor do we care about his selfish deed or its potentially catastrophic consequences. And the fact that Allen had Phoenix gain a pot belly and appear consistently slovenly is far too cliched to be appreciated.

The screenplay is lavishly predictable, much to my surprise and chagrin. It's vastly apparent that Lucas will sleep with both women. Unfortunately, Posey is relegated to playing the lesser of the two lovers. Even the big payoff isn't much of a shock since we know from the very beginning the relative fate of Professor Lucas.

I realize Allen is in his "Emma" stage, but selecting her to play a 21-year-old is a bit of a stretch. She's matured nicely as an actress, which doesn't lend credibility to portraying someone much younger. Posey, on the other hand, is terrific as Rita. She does "desperate" well --- it's a perfect role for her.

Phoenix is a non-starter for me. I simply don't care for his style, and he does not pull off the role of an intellectual. And don't even get me started on Blackley. I understand he's supposed to take a back seat to Phoenix and Stone, but heck, this guy isn't even on the bus. His performance, which I can partially blame on the writing, is so atrocious it makes me wonder about Allen's thought process in casting him. David and I did not see "If I Stay" in which he starred, but I doubt that would change my mind at all.

At least Allen's 2014 "Magic in the Moonlight" had some awesome settings, costumes and music, while "Irrational Man" has none of that. It's a puzzling production --- not one worthy of Woody Allen.

If Woody Allen's new film feels semi-autobiographical, it's not a surprise since he wrote and directed, as he does with most of his movies. His script deals with philosophies of love, life, depression, death and paranoia, amid the philandering of an older college professor with his much younger student, even as the man has a brief sexual fling with a married colleague. This is mostly expressed through the teachings and behavior of Abe Lucas, a small-town college professor, portrayed by Joaquin Phoenix.

To showcase his fragile state of mind, at one point, Abe demonstrates to one naive student what Russian roulette means by loading a single bullet into the chamber of a pistol, holding the gun to his temple, and pulling the trigger --- not once, but twice, much to the horror of several onlookers.

That act aside, Abe is highly intelligent, which makes him irresistible to the two women, despite the paunch that Phoenix carries around. One is Rita Richards (Parker Posey), an oversexed, unhappily-married science professor, the other is Jill Pollard (Emma Stone), the aforementioned student in Abe's class. He feels like his life has had little meaning, and carries around a flask from which he constantly takes a nip.

His existential view of the world extends to the bedroom, but with the help of both women, he manages to overcome any performance issues. Meanwhile, Jill has a boyfriend, Roy (Jamie Blackley), whom she constantly admonishes for suspecting something is going on between her and Abe. Jill talks about Abe incessantly, and spends most of her free time with him, so Roy clearly has reason to worry. Of course, Woody's own life includes his attraction to a younger woman, so it's not a stretch for him to depict a female student involved with her older mentor.

"Irrational Man" wants to be a murder mystery along the lines of Allen's superb "Match Point" from 10 years ago. I can tell you there is no comparison between the two. Where that film marched inexorably toward a tension-filled conclusion, "Irrational Man" plods along at a slow pace until Abe's monstrous final act, but the anxiety we feel as a viewer is barely palpable.

I suspect many moviegoers, whether Woody Allen fans or not, will find the pacing frustrating, the philosophical meanderings unnecessary or incomprehensible, or both. "Irrational Man", despite good performances from its cast, lacks the edginess of previous Allen endeavors, like "Crimes and Misdemeanors" and the more recent "Blue Jasmine".

I have always liked Parker Posey, whether in TV or film roles, although up to this point, nothing in her body of work stands out. Despite the shortcomings of "Irrational Man", however, this may be Posey's most memorable performance. As for Stone, I agree that she has matured nicely on screen, but she's not totally convincing as the infatuated college student. She was far better in her first collaboration with Allen, last year's "Magic in the Moonlight".

Whereas "Match Point" was in my Top 10 films that year, "Irrational Man" won't make any of my lists. It's just an average effort, certainly not up to Woody Allen's usual high standards. To the film's credit, even though the finale is foreseeable, it's well orchestrated, if not particularly suspenseful.

It may be irrational --- no pun intended --- but often I find a second viewing of a Woody Allen movie yields a whole new perspective. This was true, for me, with "The Purple Rose of Cairo" and "Vicky Cristina Barcelona", both of which I liked immensely after watching them again. Not sure I'll sit through "Irrational Man" again, though.

But we can look forward to Woody's next project due out in 2016, with an eclectic cast that includes Jesse Eisenberg, Kristen Stewart, Bruce Willis and Ms. Posey again.