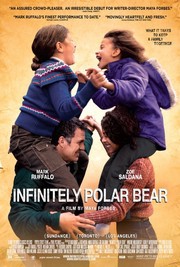 Mental health is a difficult topic to elucidate in any medium, but even more so in films, which demand that they be somewhat entertaining. Writer/director Maya Forbes has taken a stab at the effects of manic depression, which is now termed bipolar disorder, in 1978 in her movie "Infinitely Polar Bear".

Cam Stuart (Mark Ruffalo), a ne'er-do-well scion of a wealthy Boston family, suffers from manic depression. In the '60's, his then girlfriend, Maggie (Zoe Saldana), who is now his wife, never thought much about his illness.

But now, with two daughters, Amelia (Imogene Wolodarsky) and Faith (Ashley Aufderheide), to support, and a husband currently residing in a psych ward, Maggie must make the difficult choice to change and improve their future.

"Infinitely Polar Bear" is based on Forbes' own personal experience. Her mother enrolled in Columbia Business School in New York City in 1978 when Maya was ten. She and her sister were left back in Cambridge, Mass. in the care of their manic depressive father while their mother toiled away, at breakneck speed, to complete her MBA.

Forbes knew she had to direct her screenplay to ensure the story come about the way she wanted --- full of truth, warmth, humor and the effects of mental illness on children and parents.

While some may be quick to dismiss her efforts, like my illustrious partner, I believe Forbes has drawn a realistic portrayal of determination, resilience and love which speaks to the issues of dealing with such calamities. She has infused her script with pathos, as well as great joy.

And who better to play Cam than Ruffalo? He has become one of the best actors of his age group in films both large and small, such as "Infinitely Polar Bear". A role such as this demands a certain amount of self-awareness and security, and Ruffalo proves, without a doubt, that he possesses these qualities in spades.

Mental afflictions are not pretty, and neither Forbes, in her writing and directing, nor Ruffalo, in his actions, sugar-coat the effects. But they also don't overplay the severity of the situation by allowing "Infinitely Polar Bear" to wallow in the desperation inflicted upon this family.

Saldana is a wonderful choice for Maggie. It's a tough role because she must be the voice of reason, and yet leaving behind her two young daughters in the care of someone who's clearly not 100% capable, is an extremely difficult decision. Saldana covers these aspects nicely without letting her performance become maudlin.

"Infinitely Polar Bear" would not be as compelling without the efforts of Wolodarsky and Aufderheide. The girls are brilliant and hold together the script beautifully. They are delightfully amusing and painfully heartbreaking when necessary.

David has a bug up his butt about Faith carving a flower in their dining room table. Really? Get over it --- this sweetheart has an institutionalized father. He should be thankful she wasn't carving the flower in her arm!

"Infinitely Polar Bear" is a small, insightful look into the perils of bad mental health. It doesn't solve any issues, nor does it claim to. It's a lovely tribute to Maya Forbes' own difficult childhood, one with which others, I'm sure, can identify.

I know based on our initial reactions after the screening of "Infinitely Polar Bear" that Jeanne loved this movie, but I did not. I think Mark Ruffalo is one of our finest actors, particularly after recent performances in films like "Foxcatcher" and "The Normal Heart". Despite another good turn here, I wasn't that emotionally involved with his character, Cameron Stuart, or his plight dealing with bipolar disorder, the current term for manic depression.

Maybe it's because the acting is uneven. Early in the film the actors seem like they're trying too hard, although they all seem to hit their stride as the story unfolds. Writer/director Maya Forbes does maintain her pulse on the realities of the condition, and as Jeanne has pointed out, much of the film is based on her own experience. Since the primary causes of the disease lie in family history (genetics) and environmental influences (stress), it's clear why Cam acts like he does.

Like many families, money problems are at the root of their family strife, yet ironically Cam comes from a wealthy family that is unwilling to help beyond paying their low-income rent. The Stuarts' great-grandmother, whom he calls Gaga (Muriel Gould), is so rich she offers Cam her classic Bentley --- he's driving old beaters in the film, one of which is missing a floorboard --- but he turns it down for fear of not being able to afford its basics, like gasoline. And the constant cigarette drooping from Cam's mouth is annoying to see, but it does set up a later sequence where his two precocious young daughters, Amelia (Imogene Wolodarsky) and Faith (Ashley Aufderheide), post warning signs around their apartment about the dangers of smoking.

Maggie Stuart (Zoe Saldana) is clearly ambivalent about her marriage to Cam, constantly rejecting his romantic overtures of reconciliation. Yet she needs him to take care of the girls once she decides to (1) further her education with graduate studies in New York, and (2) stay in New York for a job with E. F. Hutton. We don't believe she's using him --- she seems sincere, for the most part, about working out their marital issues.

At times "Infinitely Polar Bear" seems like "Mr. Mom" on drugs, specifically lithium. Cam displays a hefty bit of patience taking care of his girls, but eventually, and on more than one occasion, he snaps, leaving their apartment abruptly to be in the company of adults. Of course, this can happen to anyone under the circumstances, so it isn't necessarily restricted to a bipolar person. He also has a violent fit of rage while in the office of a relative pleading for a job for Maggie, but aside from delivering a right jab to the jaw, his behavior doesn't seem that extraordinary as we witness his frustration boil over.

There are some tender moments, as when Amelia literally pushes her parents together, as if that will mend their relationship. And Faith gets off a few zingers, none more so than when she describes their home as a "shit hole" to which she will not invite her friends. Maggie earns our sympathy as her job interview in Boston is abruptly halted when the company learns she has two children at home. Here, Forbes touches briefly on the exasperation of women, especially African-American women, vying for above-average employment, circa 1978.

There are a couple of silly/stupid innocuous moments in the film that writers can't seem to avoid. In one, Faith and Amelia are sitting at their dining room table while Maggie cooks a meal. Faith has been busy carving flower petals into the wood surface of the table, unbeknownst to Maggie until she turns away from her cooking. She doesn't espy what Faith is doing until it's completed??

Then there's an unlikely exchange between Cam and a neighbor woman on their building's elevator. She questions him about feeling emasculated since his wife is the breadwinner. A casual conversation in an elevator ride of several seconds, and this is how it goes? Whatever happened to the usual icebreaking commentary about the weather?

One highlight for me is the cameo appearance of veteran actor Keir Dullea as Cam's father, Murray. I saw Dullea way back in 1962 in the second film of his career --- he's most famous for "2001: A Space Odyssey" --- in the highly-rated and somewhat controversial "David and Lisa". He was 26 at the time, now looking quite dapper at 79 years old.

The unwieldy title "Infinitely Polar Bear" refers to Faith's attempt to verbalize her father's condition. It's cute, but overall the writing, like the acting, is hit-and-miss, alternating between amateurism and credibility.