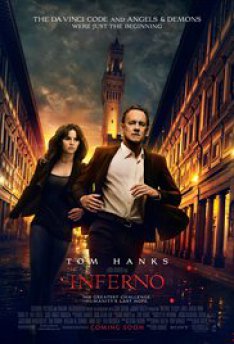 "Inferno", the third installment, all directed by Ron Howard, of the Dan Brown novels featuring the exploits of Harvard University professor Robert Langdon (Tom Hanks), is the least entertaining to date. Following "The Da Vinci Code" in 2006 and "Angels & Demons" in 2009, "Inferno", doesn't quite hit the mark of a thrilling action adventure.

Langdon awakens with amnesia after an apparent gunshot graze to the head in a hospital room in Florence, Italy. His attending doctor, Sienna Brooks (Felicity Jones), saves his life by helping him flee after an assassin tries to kill him. Hiding in her apartment, Langdon and Sienna begin to piece together what had happened to Langdon in the previous days.

The first clue is a "Faraday pointer" projecting Sandro Botticelli's "Map of Hell", which is based on Dante's "Inferno". Subsequent clues lead them to Bertrand Zobrist (Ben Foster), a billionaire geneticist who is hell-bent on reducing the Earth's population by infecting much of the inhabitants with an extremely deadly airborne virus. Nice, huh?

Langdon and Sienna soon find themselves following new leads to Venice and Istanbul. Along the way, they encounter an entire squadron of agents, not knowing which ones they can trust or which are out to steal the virus for profit.

The cast, along with Hanks and Jones, is admirable. Irrfan Khan portrays Harry Sims, the CEO of "The Consortium", a private security firm hired by Zobrist to protect his interests. Omar Sy is Christoph Bouchard, a World Health Organization agent acting on his own and Sidse Babett Knudsen plays Elizabeth Sinskey, a former lover of Langdon's who is now the head of the WHO.

Each of these accomplished actors is certainly deserving of a better script than the one written by David Koepp. Koepp was one of the screenwriters of "Angels & Demons", along with Akiva Goldsman, who also penned "The Da Vinci Code". Perhaps it's the absence of Goldsman which affects the quality of this screenplay.

"Inferno" has multiple storyline issues and problems. One particular sequence, which truly bugged me, involves Langdon's and Sienna's hiding period at her Florence apartment. The thugs trying to locate and kill off Langdon have every tracking device known to mankind at their disposal and yet NO ONE thought to get the good doctor's home address and at least start there.

Also Koepp's handling of the "big reveal" is completely anti-climactic. In fact most of "Inferno" is a big snooze. You know your film is in deep trouble when even Hanks can't save it --- let alone the totally darling Ms. Jones.

I had read "The Da Vinci Code" and "Angels & Demons", but never got around to "Inferno". Hopefully it is better than this film, but maybe --- just maybe --- Brown's insanely crazy plots are losing their luster.

Despite the weighty presence of Tom Hanks and Ron Howard, this third installment of a Dan Brown best seller will likely leave the studios hard pressed to recoup the film's estimated $75 million budget. "Inferno" follows symbologist Robert Langdon (Hanks) on another caper to prevent a catastrophe, but with only mediocre results, as far as thrillers go.

This time, half the world's population may be wiped out by a virus created by a madman (Ben Foster) worried about the proliferation of the human race. I suspect the novel is more intriguing than the movie version. Yet somehow, a storyline of three or four billion folks being eradicated by a poisonous substance fails to generate any real audience anxiety. It's just too far fetched.

"Inferno" has neither the complexity nor the substance of director Howard's first two efforts in the series, "The Da Vinci Code" (2006) and "Angels & Demons" (2009). Hanks, one of our greatest actors, tries vainly to instill concern about his amnesia early on, but we all know that his condition will be temporary. And though the film contains a couple of major plot twists, when they arrive it's more ho-hum than shocking.

True to form, Howard does provide some decent special effects, especially when Langdon is victimized by an explosion, and is briefly caught under water. And our hero is accompanied this time by yet another female sleuth, Sienna Brooks (Felicity Jones). The black French actor Omar Sy, so outstanding in films like "The Intouchables" and "Samba", is reduced here to your standard villain.

Howard, a prolific director with 40 credits to his name, has provided moviegoers with some of our best films over the past four decades. "Inferno" is not one of them.