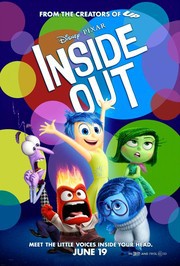 The term "genius" is batted around like a tennis ball these days. Everyone thinks they're a genius, or their kid is. For me, that kind of mind

set --- the one of pure genius --- is represented by the folks at Disney-Pixar.

Beginning with John Lasseter, and following with "Inside Out" director Pete Docter, who co-wrote such marvels as "Toy Story", "Monsters, Inc" and the incomparable "Up", and directed "Up" and "Monsters, Inc.", these brilliant, creative minds have concocted another priceless adventure. This one involves the five Emotions inside a sweet 11-year-old girl's head.

Riley (voiced by Kaitlyn Dias) resides happily with her Mom (voiced by Diane Lane) and Dad (voiced by Kyle MacLachlan) in Minnesota, playing hockey and hanging out with her best friend. Every morning begins with Riley's Emotions, Joy (voiced by Amy Poehler), Sadness (voiced by Phyllis Smith), Anger (voiced by Lewis Black), Fear (voiced by Bill Hader) and Disgust (voiced by Mindy Kaling) coming to swift attention in Headquarters, Riley's mind, to guide her through her day.

When Dad abruptly announces that the family is moving to San Francisco for his job, Riley and her five Emotions are put to the test --- how will they survive this upheaval --- and will her Emotions be able to keep her from losing all of her precious memories.

The original story for "Inside Out" was created by Docter and Ronnie Del Carmen, and the screenplay was written by Docter, Meg LeFauve and Josh Cooley. With assistance from Dr. Dacher Keltner, a professor of psychology at the University of California, Berkeley, where he directs the Berkeley Social Interaction Lab, the filmmakers were able to select the emotions they wish to feature, as there are as many as 27 documented candidates. Joy is to keep Riley happy, Fear takes care of safety, Anger ensures fairness, Disgust is present to prevent poisoning --- both physically and socially, and no one is clear why Sadness is part of the team.

It's an unbelievably clever take on the adolescent mind and how it all works. It's also a story about parenting, and the trials and tribulations of getting things right --- or as close as possible.

When Riley experiences much heartbreak and confusion due to her big move to a different city, including new schools, friends and hockey team, Joy and Sadness take a fraught-filled journey through Long Term Memory, Imagination Land, Abstract Thought and Dream Productions to get her back to her days filled with happiness and security.

As always with Disney-Pixar, "Inside Out" is loaded with great fun, good lessons and charm. And these characters are as memorable as any the studio has created in the past. Poehler perfectly exemplifies the tone of voice necessary to represent Joy. Riley is created as a very happy child, so the Emotion of Joy is tantamount to Riley's persona.

The other voices are equally well accomplished. Lewis and Kaling are hilarious as Anger and Disgust. Hader's part as Fear is a tad smaller, since Riley seems afraid of nothing. Smith is delightfully pessimistic as Sadness. She's terrific, and her character is wonderfully drawn and written. Watching Joy drag Sadness around Long Term Memory is memorable --- and very funny.

My favorite, though, is Bing Bong (voiced by the venerable Richard Kind). He was Riley's imaginary friend from early childhood and makes a desperate effort to become a part of Riley's memory again. His character is a pivotal one, and not soon to be forgotten. Kind is masterful at bringing Bing Bong to life, and so very, very endearing.

"Inside Out" is pure joy --- no pun intended. The Disney-Pixar team is vast and incredible. The abundance of talent in storytelling, animation, production and music (original by Oscar-winner Michael Giacchino, who also composed "The Incredibles", "Ratatouille" and "Up") is astounding.

It doesn't matter if you're a parent, you simply must see "Inside Out" for all the pleasure it provides. And, if you are a parent, please do not miss this opportunity to enjoy "Inside Out" with your children --- no matter their age, in 3-D if possible.

p.s. --- "Lava", the short shown before, as with all Disney-Pixar offerings, is totally beautiful and engaging. A lovely way to begin the entire moving experience.

Disney-Pixar's latest venture may be its most ambitious. With a totally unique premise, a wealth of voice talent, and the usual attention to detail, "Inside Out" is a must for multiple viewings. There is simply too much going on to be absorbed adequately in one sitting.

Its tagline is "Meet the little voices inside your head". We all have them. With the likes of Amy Poehler (Joy), Bill Hader (Fear), Lewis Black (Anger), and Mindy Kaling (Disgust) operating inside 11-year-old Riley's (Kaitlyn Dias) brain, a.k.a. Headquarters, we are treated to a clever concept of what the human mind might look like if it was dissected and quantified in three dimensional terms.

A fifth Emotion, Sadness, is voiced by Phyllis Smith, best known for TV's "The Office". She practically steals the show as the little blue, bespectacled figure of gloom and doom who loves Riley, but can't seem to help herself when it comes to accentuating the negative. If this was written by A.A. Milne, Sadness would be the story's Eeyore.

"Inside Out" nicely captures the trials and tribulations of being the new kid in town. When Riley's Mom and Dad pick up their Minnesota roots for Dad's new job in San Francisco, Riley is caught in the dilemma of all kids who have to leave their comfort zone of school friends and playmates. This is brought to light never more explicitly than when Riley is introduced to her new classmates --- a room full of strange faces --- and breaks down amid great sobs. She takes out her humiliation and frustration on her parents at the dinner table, clearly unable and unwilling to talk about it.

Her "panel" of emotions takes over with the goal of restoring the joy in her world, complete with thorough examinations of Riley's "core memories", those major events in her life, as with all of us, that will endure forever. This also sets in motion the premise of Riley's islands of personality --- there's one for Family, one for Goofiness, even one for Hockey (she was a star in Minnesota).

Director and co-writer Pete Docter ("Up", "Monsters, Inc"), who also has credits for the original "Toy Story", "Wall-E" and "The Incredibles", has again teamed with executive producer John Lasseter. There is no question their collaborative efforts will result in a blockbuster achievement, artistically and at the box office. And Michael Giacchino's soundtrack --- he's fresh off composing the music for "Jurassic World" --- is a delight.