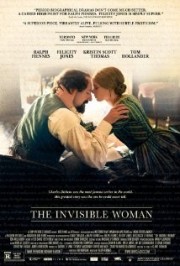 Ralph Fiennes directs and stars as Charles Dickens in this gorgeous but stilted adaptation of Claire Tomalin's biography of the same name. "The Invisible Woman" details the period in Dickens' life, when at the height of his fame, he falls in love with Nelly Ternan, played beautifully by Felicity Jones.

Nelly is the youngest daughter of Mrs. Ternan (Kristen Scott Thomas), who, along with her two other daughters, Maria (Perdita Weeks) and Fanny (Amanda Hale), all perform on stage. Though not always looked upon as a favorable profession, Mrs. Ternan does her best to support all of them. A chance meeting at a rehearsal of Dickens' close friend, Wilkie Collins' (Tom Hollander) new play, "The Frozen Deep", sets in motion a fait accompli between 18-year-old Nelly and the 45-year-old Dickens.

Meanwhile, Dickens' long-suffering wife, Catherine (Joanna Scanlan), is at home on a country estate with their 10 children. She is painfully aware of her current status, that of an unloved, thrust-aside matriarch, but the current mores of the Victorian society keep Dickens from leaving her altogether.

"The Invisible Woman" is a sumptuous film, beginning with the breathtaking scene in 1855 of Nelly --- now Mrs. Wharton Robinson --- striding purposefully across a barren, deserted beach. The past of Charles Dickens is behind her, and she is presently married to a school headmaster, George Wharton Robinson (Tom Burke). But because the school is rehearsing a play by Dickens and Collins, her thoughts revert to the days of her affair with Dickens.

Jones is a wonderful young British actress. David and I met her when she was in Chicago promoting her film "Like Crazy" three years ago. She's enormously talented and self-effacing, and a perfect choice for Nelly. Her quiet scenes with Fiennes are particularly touching and distinctly moving.

My problem with "The Invisible Woman" is Fiennes himself. His portrayal of Dickens is distracting, and, I'm sorry to say, a bit over-the-top. Perhaps Dickens was truly child-like in real life, though I find that rather hard to believe. But Fiennes plays him as if he were nothing more than a tall six-year-old. Initially Fiennes was not cast as Dickens, but after much coaxing, decided to make the role his own. I fear he should have passed on that idea, because, never once, did I buy the love/infatuation between he and Nelly.

Usually, a film such as this would be a huge favorite of mine. The costumes by Oscar-winner Michael O'Connor are divine, and not only those of the women. He has Dickens replete in sartorial splendor, as well. Hair and make-up designer, Jenny Shircore, also an Oscar recipient, has given "The Invisible Woman" the indelible look of this period in English history.

The screenplay by Abi Morgan is less than thrilling. At times, her script is downright boring. The scandal that the illumination of this relationship would have caused is only near the surface of the dialogue. I would have preferred a more palpable depiction. Alas, "The Invisible Woman" is a good movie, not a great one.

ed. note: Jeanne and I never write together, so the fact that our reviews of this film start the same way is totally random --- and rather frightening. We truly are becoming "one".

Ralph Fiennes stars and directs in this biographical look at Charles Dickens at the height of his fame in England. Of course, Dickens is already a world-renowned author, his latest novel in this film being "Great Expectations".

Here Dickens is shown with a large brood of children --- 10 in all ---  and a wife with whom his relationship can only be described as "icy". He is portrayed as a bon vivant, fun-loving, life-of-the-party type who revels in the admiration of his followers as much as he relishes the thought of an illicit affair with a pretty 18-year-old (Felicity Jones), an actress in one of his stage plays.

Much of the movie is told in flashback as the story unfolds of his infatuation with Ellen Ternan, a.k.a. Nelly (Jones), along with his eventual separation from his wife, Catherine (British TV celeb Joanna Scanlan). Nelly is equally smitten with Dickens almost immediately. His wild Einstein-like hair aside, Dickens is famous, wealthy and quite charming, his popularity widespread, his magnetic personality intact --- what chance did a young girl in Victorian England have?

All of this doesn't necessarily make for a compelling film, however, which reunites Fiennes with  his "English Patient" co-star, Kristen Scott Thomas, who plays Frances, Nelly 's mother.  I found the movie interesting from the standpoint of British society and its perceptions of an older man (he was 45 on her 18th birthday) and a much younger woman in a romantic involvement, if ever so prudently. There are also brief shots of Dickens in the poorer sections of London, perhaps the impetus for one of his most treasured works, "Oliver Twist".

"The Invisible Woman" is an unlikely love story that is based on real events. It sprang from the play "Little Nell", which in turn was based on the book "The Invisible Woman" by Claire Tomalin. Some of what transpires in the movie, particularly elements of the relationship between Charles and Nelly, is speculative. As for Jones --- you may remember her from the Sundance hit "Like Crazy"  (2011) --- she is quite good and reason enough to invest a couple of hours in this film.