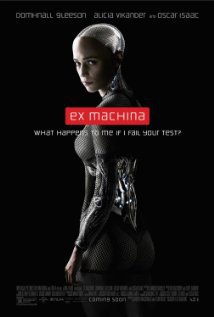 Another artificial intelligence thriller, "Ex Machina" is predictable and miscast --- at least regarding the two male leads.

Oscar Isaac stars as the uber-reclusive Nathan Bateman, CEO of an internet-search conglomerate. He resides in a vast estate set apart in a mountainous region, only negotiable by helicopter. One of his programmers, Caleb Smith (Domhnall Gleeson), "wins" a company-wide competition, and is whisked off to join Nathan at his digs for an entire week.

Once there, Caleb learns that Nathan has specific plans for his visit, namely participation in a Turing Test with his latest A.I., Ava (Alicia Vikander). What neither man realizes is that Ava has her own agenda.

Though I appreciate and admire Isaac's acting ability, he was miscast in this role. Writer/director Alex Garland affords Isaac an unusual look, hoping for realism, I'm sure. Instead, he looks like a refugee from a concentration camp except for his buff physique. The impression is Garland trying too hard to make Nathan appear detached and eccentric.

Unfortunately, Gleeson's casting struck me the same. He does not project the right vibe as a nerd programmer, who obviously falls for the A.I. Vikander is well-chosen, and it's because of her that the film is not a total failure. Her portrayal of Ava is just eerie enough, and believable as an A.I. --- quiet and yet disturbing, all at the same time.

But, it's the predictability that ultimately hurts "Ex Machina" . Geez, when Nathan asks Caleb if he thinks Ava really "likes" him, it's a blatant foreshadowing of what is to come. Talk about killing the suspense ---

"Ex Machina" also has a few logistical issues. This guy's estate is hours from anywhere by helicopter. I can understand a fully stocked bar, but fresh sashimi --- where did that come from? And the ending concerning the helicopter and the passenger is also a bit problematic for me.

However, I did really enjoy Nathan's dance routine with his Asian housekeeper/paramour. But, alas, I cannot heartily recommend "Ex Machina". What is it about men and their obsession with the "perfect" woman, who will do and say only what they program?

Caleb (Domhnall Gleeson, "Calvary", "Unbroken") is a computer whiz working in an office when he learns he has won a competition to spend a week at the isolated compound of his company's founder, Nathan Bateman (Oscar Isaac). Nathan is the brains behind the planet's most extensive search engine, through which 94% of the world's searches are conducted. He has used his extreme wealth to develop a robot whose artificial intelligence is far more advanced than any other. Her name is Ava (Alicia Vikander), and it is Caleb's job to evaluate her for Nathan.

Smartly written and directed by Alex Garland ("28 Days Later"), "Ex Machina"  is an original and intriguing bit of sci-fi that's as much a psychological puzzle as it is a thriller. As Nathan, Isaac is a darkly brooding presence who seems to be hiding something, but we're not quite sure what that may be. Effervescent and welcoming to Caleb initially, there are hints that Nathan may be more than just the brilliant scientist who created Ava. She and Caleb form a bond --- you almost forget she's a machine --- and eventually she confides to Caleb that he cannot trust Nathan.

So sets the stage for a cat-and-mouse game within the confines of Nathan's elaborate property, which includes Caleb's windowless bedroom.  "It's not a home", as Nathan explains, "it's a research lab". As Caleb and Ava "interview" each other, Nathan watches and listens in, except when there's a power "cut", and he cannot see  or hear them --- or can he?

Nathan is an intimidating individual, especially when he's been drinking, which he does heavily. Caleb, meanwhile, is initially cowed by Nathan, but inevitably tries to gain the upper hand. Vikander is outstanding as the female "A.I." trapped in a place from which she desperately wants to escape. The singular special effect of Ava with a human face, but mostly composed of wires and a transparent body, is quite effective. We've seen it done before, but not this well. The young Swedish actress excels in the film's most crucial role.

Garland's camera is always in the right place for maximum suspense. When Nathan passes out from too much vodka, Caleb seizes the  opportunity to be with Ava. We're peeking over the couch where he tosses and turns, and eventually wakens in time to see them colluding against him.

Is Caleb attracted to Ava? Can an A.I. express original feelings, or are they only programmed to do so? What about sex? And what's with Nathan's non-English speaking servant, a sexy Asian named Kyoko (Sonoya Mizuno)? (They share a brief but captivating dance sequence that's strangely not out of place). These and many more questions are posed, and mostly answered, in a film that's the best I've seen of its genre.

The movie is beautifully photographed in the early sequences as Caleb flies over Nathan's vast estate in a helicopter. The rest of the film takes place within the walls of the facility, so it's a good thing that "Ex Machina" is so well written and acted.

We can extract at least one truism from this imaginative and beguiling story. Women hate to be treated as

chattel --- even if they're robots.