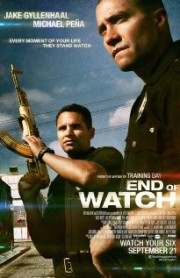 Jake Gyllenhaal and Michael Pena as Brian Taylor and Mike Zavala, are two "brothers", uniformed cops who spend their days and nights cruising the mean streets of South Central, L.A. in a black-and-white. As Brian so aptly puts it, they see more action in one shift than most police officers see in a lifetime.

The action is fast-paced and furious, with dialogue to match. These two face everything from gang warfare to human trafficking to burning buildings. And when they inadvertently stumble across the business of a Mexican cartel, their lives are in great peril.

Anna Kendrick, Natalie Martinez, America Ferrara and Cody Horn are the women sharing the daily traumas and/or good times with Gyllenhaal and Pena, but the major focus is really the intensely bonded relationship between Brian and Mike.

The major drawback for me, besides the on-the-job violence, is the handheld camera writer/director/producer David Ayer employs. It is so shaky at times that I felt nauseous for half the movie. But I suppose it's a small price to pay for a well-scripted, sharply-acted portrayal of L.A. city cops.

There aren't many writers that can make a demon out of Denzel Washington, but screenwriter David Ayer did just that when he penned the script for "Training Day", the 2002 blockbuster about a rogue detective that propelled Washington to a Best Actor Oscar. Now, Ayer has written, and this time directed, another hard-hitting police movie that holds no punches, starring Jake Gyllenhaal and Michael Pena.

Brian Taylor (Gyllenhaal) and Mike Zavala (Pena) are beat cops who ease the boredom of driving around all day by telling each other their life stories and generally yukking it up. Both actors are very convincing as best friends who call each other brother and proclaim their mutual love without hesitation. But they are even more credible as two uber-tough crime busters in the notorious South Central, L.A., haven for the local drug trade that is slowly being overrun by Mexican cartels.

The movie begins with some routine calls for the boys, like a domestic disturbance dispute that was originally reported as a case of missing children. But things gradually escalate, including one ultra-tense sequence when Taylor and Zavala rush into a burning house to rescue three toddlers. "End of Watch", in fact, is replete with white-knuckle moments, including some disturbing images which, as the MPAA description suggests, contribute mightily to its "R" rating.

Taylor and Zavala are generally regarded by their peers as an anomaly on the force because they always seem to get themselves involved in high-profile situations that most cops manage to avoid. Example: a routine traffic chase leads them into a terrifying ambush attempt by Latino drug dealers who consider the pair a major nuisance, and want them eliminated. Earlier, this same band of drug-crazed Mexicans, including the driver --- a particularly psycho, foul-mouthed female --- carry out a drive-by shooting on a group of black rival gang members, setting up what can only be described as an explosive climax.

There are some rather ordinary side issues, like one fellow cop, Van Hauser (David Harbour) who doesn't particularly like them, but begrudgingly acknowledges their heroism later. And Zavala's wife, Gabby (Natalie Martinez) is pregnant with their first child, while Taylor's latest dating partner, Janet (Anna Kendrick), has captured his fancy, and they soon marry. However, these are all secondary to the suspenseful times when the partners take a radio call and pull up to a building or residence, not knowing what awaits them.

My only complaint with this film is the overuse of a hand-held camera. If Ayer 's vision of realism is a shaky lens, he has succeeded. Actually, Officer Taylor is constantly filming their activities for a "project" he is working on, which gives Ayer an out for the frequently annoying shakiness, along with "lapel cams" the officers wear. But the smart dialogue and solid acting by the entire entourage make up for this relatively minor shortcoming, which is nonetheless effective much of the time. "End of Watch" is often not easy to watch, but it will keep moviegoers glued to the screen -- guaranteed.