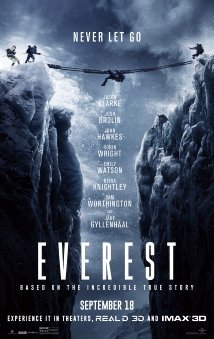 When one famous climber of Mount Everest was asked why he wanted to make the ascent, he answered, "Because it's there". Conventional wisdom attributes that quote to Sir Edmund Hillary, and that would be incorrect. It was actually uttered by George Mallory, some 30 years before Hillary made his famous trek up the world's highest peak.

In the new film "Everest", featuring an all-star cast and based on the true story of a group of climbers in 1996, John Hawkes, playing a rather frail Doug Hansen, was asked the same question by journalist John Krakauer (Michael Kelly) who accompanied the climbers on this particular expedition. Hansen's answer was short and to the point: to see something so spectacular, that most other people will never get to see.

And that explains, what appears to most of us, the insanity that consumes these people. Over 200 climbers have died since records were kept, but that is apparently not a deterrent.

It's ironic that two films about mountain climbing are being released within a couple of weeks of each other --- more on that later. As for "Everest", it is a special effects bonanza, especially in IMAX/3D. Scenes of a rescue helicopter being buffeted by high winds are tense, although the actor playing the pilot lays it on a bit thick with his body movements. The cinematography is often breathtaking --- no surprise there, and as moviegoers, we feel like we're on the side of Mt. Everest along with everyone else.

That alone is not enough to make "Everest" a great film. Although we care for the climbers, played by Jason Clarke (the group leader), Jake Gyllenhaal, Josh Brolin, Sam Worthington, Hawkes and others, along with Emily Watson at the base camp bringing some sense of sanity to the whole thing, there is an inherent problem. Despite all the wondrous special effects in the world, we know that these actors are not about to climb Everest anytime soon, so one must suspend belief for the duration of the film to be fully entertained.

There are also predictable side plots involving loved ones back home. Jan Arnold (Keira Knightley) is pregnant with Rob Hall's (Clarke) baby, while Peach Weathers (Robin Wright) frets as reports of her stranded husband, Beck (Brolin) are made known via telephone updates. Phone calls from Nepal to the States are not cheap --- $25 a minute --- but on the other hand, this particular group of climbers paid upwards of $65,000 apiece for the privilege.

"Everest" is also a mini-lesson in mountain climbing minutia. It's not necessarily fatigue that challenges the climbers the most, it's a lack of oxygen, with the rarified air at 29,000 feet --- over five miles up if you're counting. And one aspect I found fascinating --- when climbers eventually do make it to the very top, it only takes the tip of an index finger to touch the absolute highest point of this massive work of nature.

As for that other mountain movie I mentioned, it's called "Meru", about a peak in India that is reputed to be more difficult than Everest. (Check my review under "New Releases"). That film is a documentary photographed by two of the three participants, and it is harrowing. As for "Everest", it's most like the old Cinerama movies where you could experience the world's highest roller coaster, without actually leaving your seat.