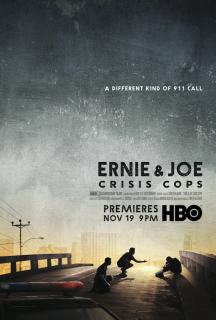 Jenifer McShane, an award-winning documentarian, has written and produced her third effort, ERNIE & JOE: CRISIS COPS, about two members of the San Antonio Police Department’s mental health unit. Ernie Stevens and Joe Smarro are partners in this unit, and McShane’s film chronicles their workdays as they deal with people in crisis.

The approach of this 10-member unit is completely innovative in their efforts to come to the aid of the mentally ill. Instead of heartless treatment and jail time, these police officers are trained to handle each situation humanely and with compassion. It is their job to divert these individuals from prison to mental health facilities where they can receive the proper care.

Ernie and Joe are certainly not just any police officers. These two men, and the rest of the unit, are dedicated to making this new program a success --- and it has been proven hugely beneficial.

Mental health issues don’t just affect the people who are afflicted, but their families and the rest of society, as well. Most cities and towns have police forces who are not equipped to handle people who suffer from mental illness. We have all read accounts of how encounters with police can turn deadly for the mentally impaired.

Through training and human decency, officers like Ernie and Joe can be so much more effective, and we watch as they save multiple individuals from hurting themselves or others. McShane and her mostly female crew have created a deeply intimate and very persuasive argument for this kind of police reaction nationwide. It’s amazing work that these dedicated officers are performing in San Antonio and ERNIE & JOE: CRISIS COPS should be viewed by every police officer in the country.

ERNIE & JOE: CRISIS COPS is a documentary that works on several levels. First and foremost, it’s a showcase for the important agenda of the San Antonio Police Department that is seriously focused on mental health issues when police officers answer calls of domestic disturbances, potential suicides, and the like. In other words, train your police to use their weapons only as a last resort.

Secondly, the two principals, Ernie Stevens and Joe Smarro, are devoted cops who believe strongly in their mission and who happen to also be best friends. The thought here is that director Jenifer McShane’s surprisingly absorbing movie for HBO Documentary Films is something that should be seen by every police department in the country.

The signature scenario in ERNIE & JOE: CRISIS COPS involves Ernie and Joe verbally confronting Kendra, an African American woman who feels completely hopeless and in total despair. She is on the verge of jumping from a bridge to her certain death. The pair use every aspect of their training to deter Kendra from her intended suicide. It’s probably as gripping a story arc as any piece of fiction you’ve seen lately.

Perhaps the greatest consequence of Ernie and Joe’s raison d’etre (reason for being) is that the SAPD is expanding its specialized mental health unit to 20 police officers. Hopefully such a trend will end the senseless violence we hear about virtually every day. But keep in mind that ERNIE & JOE: CRISIS COPS is not all dire events or depressing scenarios. McShane has taken the time to humanize the two officers, resulting in comic relief as we get to know them on a personal level, as well.