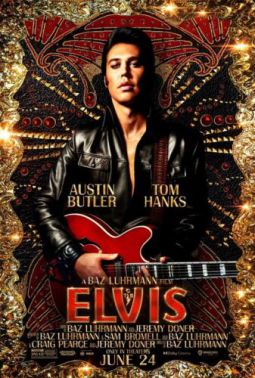 Beginning with a young Elvis Presley (the beautiful Chaydon Jay) who lived with his mother, Gladys (Helen Thomson), whom he adored, and his father, Vernon (Richard Roxburgh), in a white-designated house in a Black section of Tupelo, Mississippi, ELVIS is Baz Luhrmann’s love letter to the King of Rock and Roll. It’s loud, frenetic, waaaaay too long, but ultimately highly entertaining.

At age 19, Elvis Presley (Austin Butler) meets Colonel Tom Parker (Tom Hanks), a carny barker and the man who would become his longtime manager. Elvis was just starting out, but Parker, who narrates ELVIS, sees in him what he’s been looking for his entire life --- the greatest carnival act he’d ever seen.

Parker never cared about the music, but he did recognize Elvis’ charisma --- and the astonishing effect he had on his audiences --- especially the young women. This was a meal ticket too good to pass up and Parker had no intention of losing out financially. He pushes Elvis to the brink --- it was always about the money.

Despite its interminable running length, ELVIS glosses over a few minor details, like the fact that when he meets and starts dating Priscilla (Olivia DeJonge) in Germany where he is stationed in the army, she is only 14 years old. They marry eight years later, and she is his best friend and confidante, but even she, after six years of marriage, can’t stick around as he slowly kills himself with his addictive habits.

But Luhrmann’s biopic isn’t really about Elvis’ relationship with Priscilla. It’s really about his undying loyalty to the man, Parker, who made him a star. Though Elvis tries on a few occasions to end their working partnership, he is never able to extricate himself from their arrangement.

ELVIS details the lengths to which Parker, who was not a colonel, nor a Tom or even a Parker, but a Dutch immigrant with no legal residency in the U.S., would go to keep Elvis under his thumb. For true Elvis devotees, this may not be something new, but for the rest of us, it’s shocking that it was allowed to go on for as long as it is purported in ELVIS.

ELVIS is no exception. The sets, including Graceland, Beale Street in Memphis and the International Hotel in Las Vegas, are phenomenal, especially since ELVIS was filmed in Australia. Luhrmann’s longtime collaborator, production and costume designer Catherine Martin, has managed the impossible. Working with Karen Murphy, these two women recreated historic places for ELVIS worthy of multiple Oscars.

But, as spectacular as all of this is, none of it matters if Butler fails at capturing the essence of this magnetic performer. Fortunately for everyone involved, he’s up to the challenge --- and what a performance it is! Butler does his own singing initially as young Elvis, but as the character ages, his voice is blended with Elvis’, and at the end of the film, the recordings are all just Elvis himself.

Not only does Butler manage to sound like Elvis, he replicates all the gyrations that made Elvis famous. His moves, his mannerisms, his smoldering sex appeal all scream Elvis --- it’s amazing to behold. There have been a few very well-received biopics recently of famous male singers, with Butler’s Elvis possibly the best.

This movie is quite a departure for Hanks. Playing a carnival barker obsessed with money --- a con man essentially --- is not the typical role for “America’s Dad”, but fat suit, et al, Hanks relishes this change and the opportunity to work with Luhrmann. And, per usual, Hanks gives Colonel Parker his best. It’s a portrayal of a smarmy huckster some will find unbelievable, but Hanks is truly mesmerizing.

Elvis Presley was --- and still is --- an icon. There may never be another solo artist like him --- one who influenced so very much during his brief lifetime. Baz Luhrmann has made the ultimate biopic. Not everyone will like it, but not to worry. Priscilla and Lisa Marie Presley, their daughter, are happy with ELVIS and that may be all that matters to Luhrmann.

If the name Austin Butler doesn’t register with you, he will soon become a household name. The 30-year-old actor has the distinct honor of playing the title role in ELVIS, the new Baz Luhrmann-directed film about the King of Rock and Roll. And he honors the memory of Elvis Presley with a stunning performance that should make him an Academy Award nominee for Best Actor.

The film itself is a bit too long --- by at least 20 minutes --- but that is not a deal breaker because of Butler’s profound likeness to Elvis in both voice and theatrics. It also doesn’t hurt that a guy named Tom Hanks plays Elvis’ long-time mentor and controversial manager Colonel Tom Parker. Hanks, too, may be in line for a Best Supporting nod.

I do have a query for Mr. Luhrmann, though. How does one make a biopic about Elvis and exclude mega hits like “Don’t Be Cruel” and “Love Me Tender”? There was also no mention of the well-known edict that Elvis could perform on “The Ed Sullivan Show” only if the cameras showed him from the waist up. Incredibly --- in view of the problems we face in 2022 in the U.S. --- the country was divided over Elvis’ suggestive moves on stage. How ridiculously superfluous that seems now.

Nevertheless, we do get to see Butler perform --- gyrations and glorious costumes included --- to Elvis best sellers like “Heartbreak Hotel”, “Jailhouse Rock” and “Suspicious Minds”. His performance may have movie buffs scrambling to the internet to check out his acting resume, which started at age 15 with television.

Butler does his own singing on the early Elvis songs, and at other times there was a technical combination of both Butler and Presley voices. Luhrmann allows that Elvis’ real voice was used for the later songs. It doesn’t matter, because Butler’s presence on the screen is entrancing, whether he’s dancing on a stage to throngs of screaming women or tearful at the death of his mother, Gladys (Helen Thomson) to whom he was completely devoted. As for the fans, our first glimpse of hysterical females at Elvis’ initial public performance is so ridiculous it becomes a parody.

At one point in the film Elvis is described as the most famous person in the world, so when he dies at age 42 in 1977 it’s no surprise that newspapers everywhere led with that headline. Such a tragic ending to a true entertainment icon, yet his personal life was fraught with trouble. His marriage to Priscilla (Olivia DeJonge) didn’t last partly because he could not overcome his addiction to the adoration of his fans --- and drugs.

We learn about his grueling schedule orchestrated by Parker at the International Hotel in Las Vegas. The movie also touches on major news events during Elvis’ prime, including the assassinations of Dr. Martin Luther King and Senator Robert F. Kennedy, with archival TV footage of Walter Kronkite delivering the somber news to his viewers, and President Lyndon Johnson lamenting the state of affairs in America.

My favorite scene in ELVIS occurs when Elvis instructs his 30-piece orchestra during rehearsals for his debut at The International Hotel and Casino, and later known as the Las Vegas Hilton. He essentially acts as his own conductor, directing the backup singers, the trombone section and the drummer, among others. It’s a marvelous bit of filmmaking and exemplifies the wonderful job of editing throughout ELVIS by Jonathan Redmond and Matt Villa.

So how did Luhrmann end up casting Butler? He had heard about the young man who played opposite Denzel Washington on Broadway in “The Iceman Cometh”. It was Denzel who convinced Luhrmann to take a closer look at Butler after describing his unparalleled work ethic.

It doesn’t matter if you were president of the Elvis Presley fan club in your area or just a casual music fan who listened to his songs on the radio. ELVIS is a must-see for the indelible performances by Hanks and especially Butler.