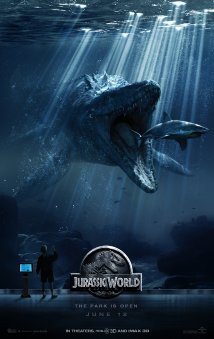 I am usually bored out of my mind by these types of sequels, especially since Steven Spielberg's original, "Jurassic Park", was 22 years ago. But, truthfully, "Jurassic World" is fun and entertaining, mainly due to the presence of Chris Pratt.

The theme park Jurassic World has been operational and successful for 10 years. But attendance is declining and Claire (Bryce Dallas Howard), the park's controlling manager, is constantly worried about profits, and the ever-increasing need for bigger/scarier dinosaurs. Her boss, Simon Masrani (Irrfan Khan), is more concerned about park attendees enjoying themselves, and the welfare of the animals.

A new specimen, Indominus rex, has been created by Dr. Henry Wu (BD Wong), and is ready for action, but Masrani wants Owen (Pratt) to assess the creature first. Owen has been working with a group of highly-skilled and very aggressive Velociraptors, which he has trained to follow his commands.

A brash and self-serving colleague, Hoskins (Vincent D'Onofrio) is plotting to test these raptors for future military purposes. Unfortunately Claire's two nephews, 11-year-old Gray (Ty Simpkins) and 16-year-old Zach (Nick Robinson), who have come for a park visit, and thousands of others, are placed in terrible danger when these men's follies go awry.

Much like "Jurassic Park", and its less-than-thrilling sequels, "Jurassic World" features a lot of screaming and running. But it also provides a few terrifying sequences involving more than enough well-CGI'ed monsters.

My particular favorite is Mosasaurus, the whale-like creature with jaws the size of Atlantis. It has a couple of significantly placed opportunities to scare the bejesus out of the audience.

The Velociraptors are also quite amazing, utilizing computer generated VFX and CGI. But director Colin Trevorrow was determined to employ an animatronic dinosaur, particularly in one scene involving a wounded Apatosaurus, a gentle giant who was attacked by the Indominus rex.

While some members of the critiquing element may find this creature's last moments with Claire and Owen at its side sappy, I found it rather touching. Owen had made an attempt to have Claire understand that these animals are not just fodder for park-goers, but real living, breathing dinosaurs that do not deserve such a fate.

Without Pratt, "Jurassic World" would not be the highly entertaining film that it is. He's not quite as humorous as he was in last summer's "Guardians of the Galaxy", but that's more to do with the screenplay by Rick Jaffa, Amanda Silver, Derek Connolly and Trevorrow than Pratt's performance. He does manage a few zingers, mostly aimed at Claire, but "Jurassic World" is a much more serious movie.

The rest of the cast is adequate, except for D'Onofrio, who overacts in every single scene. I could have done without his snarky, frat-boy, fat-boy persona, but I guess every film of this genre must have a bad guy.

Most of the praise for "Jurassic World" goes to the literally hundreds of crew members and the Academy Award-winning supervisors. Experts such as Phil Tippett, an Oscar-winning special effects supervisor from the "Jurassic Park" series, was brought in to oversee the production. And new creative standouts, Christopher Raimo, a VFX production supervisor, and ILM's visual effects supervisor, Tim Alexander, worked to make the technology as precise as possible.

There are, however, way too many others to name. Suffice to say that the effects are tremendous --- they defy explanation. Unfortunately audiences have become accustomed to phenomenal digital designs, but watching the Apatosaurus lift and turn its head, breathing and twitching its eye is so real, it's difficult to comprehend how marvelously all of this is accomplished.

"Jurassic World" is huge. For a generation not familiar with the original "Jurassic Park", they will revel in the pure fantasy of this film. It's a crowd pleaser, even for those who have become nonplussed by such magic.

The biggest question going into this fourth installment of Jurassic-age creatures: what would the filmmakers do to make this version entertaining, now that the special effects of dinosaurs roaming around a theme park is essentially passé?

The answer lies in the writing, the casting, and the humanistic qualities given to the once-feared, and still fearsome, Velociraptors, seen in the previous movies. These three elements make "Jurassic World" a sure bet to recoup, many times over, its reported budget of around $150 million. And rest assured, you will feel sorry for a dying Apatosaurus --- victim of a vicious attack by a T-rex like monster.

The film's two main stars carry the film, with able assistance from two young actors whose performances could have made the story a sideshow. In the lead are Chris Pratt as Owen, acting like a prehistoric lion tamer, but with vicious and unpredictable raptors as his subjects; and Bryce Dallas Howard as Claire, the theme park's beautiful and demanding operations manager. With her flaming red hair and polished speech, Howard commands attention in her every scene.

Both actors are commendable, sparring off each other's obvious attraction --- they dated once --- then going into high gear when all hell breaks loose at the park. But how Claire manages to keep her high heels on the entire time is a mystery.

As for Pratt, he doesn't overplay the macho card, and loses none of the likeability he garnered in "Guardians of the Galaxy". A host of actors were considered for the role of Owen, including Armie Hammer, Josh Brolin, Jason Statham and Jason Sudeikis (huh?). After seeing Pratt handle this part, the filmmakers made a very good choice.

Nick Robinson (Zach) and Ty Simpkins (Gray) are brothers sent on this dino adventure by their mother (Judy Greer), who is also Claire's sister. When Claire's nephews are stranded in the park while all other visitors have been quarantined because of a security breach (translation: the Indominus rex has escaped), she is desperate to rescue them, aided by Owen. The two young actors carry themselves very well, none more so than when they are trapped in Gyrosphere Valley, so named because guests can self-drive around the dinosaur-rampant fields in specially-equipped two-seater bubbles --- the ultimate theme park ride.

Director and co-writer Colin Trevorrow was a 2012 nominee by the Chicago Film Critics Association for Most Promising Filmmaker (the well-received "Safety Not Guaranteed"). His co-writer on that film, Derek Connolly, also teamed with Trevorrow, Rick Jaffa and Amanda Silver on "Jurassic World" (the latter two collaborated on the highly successful "Planet  of the Apes" movies of the past few years).

The script is infused with enough amusing lines to ensure the movie doesn't take itself overly seriously, a problem many science fiction films can't seem to overcome. Beautifully photographed (John Schwartzman, "Seabiscuit", "The Amazing Spider-Man") on location in Hawaii --- although the setting for Isla Nublar is supposed to be in Costa Rica --- the gigantic sets for "Jurassic World" were assembled in New Orleans by a crew of about 400 crafts persons.

The rest of the massive crew of "Jurassic World" has created an environment that looks real, complete with 800 extras walking down Main Street of Isla Nublar, purchasing souvenirs and marveling at the exhibits all around them, like the holograms of prehistoric creatures. When a series of mishaps results in flying reptiles escaping from their confinement and attacking the crowds, the 3-D utilization is at its best.

As people are snatched by the jaws of the primary monster, the Indominus rex, a dinosaur created from the DNA of a T-rex and other animals, it invokes memories of long-ago films like "The 7th Voyage of Sinbad", where unfortunate sailors are grabbed by Polyphemus, the one-eyed Cyclops created by the legendary Ray Harryhausen. The music in "Jurassic World" (Michael Giacchino, Oscar winner for "Up", plus "Dawn of the Planet of the Apes") is a perfect complement to the action.

BD Wong plays Dr. Wu, the only returning character from Steven Spielberg's original "Jurassic Park". The geneticist heads up the lab where scientists are busy testing their DNA samples for further re-creations.

Vincent D'Onofrio plays Hoskins, a collaborator with Wu, who has his own ideas of how the raptors should be utilized, and Irrfan Khan ("Life of Pi") is the park's wealthy benefactor with a penchant for flying a helicopter around the island.

"Jurassic World" comes some 22 years after Spielberg's "Jurassic Park" thrilled audiences intrigued with dinosaurs again roaming the Earth. Now this installment has a whole new set of moviegoers to attract. With its capable cast, Spielberg's hand-picked director Colin Trevorrow, and marvelous special effects, "Jurassic World" may be the best of the lot.