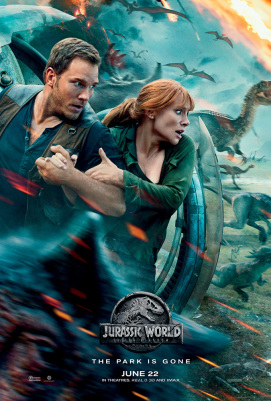 JURASSIC WORLD: FALLEN KINGDOM begins four years following the demise of the Jurassic World theme park on Isla Nublar in JURASSIC WORLD (2015). The dinosaurs have been fending for themselves in the jungle, but now, because of an impending volcanic eruption, they face extinction once again.

Sir Benjamin Lockwood (James Cromwell) and his assistant, Eli Mills (Rafe Spall) plan to have the dinosaurs captured and sent to another island sanctuary. Mills contacts Claire Dearing (Bryce Dallas Howard) for the mission, and she coerces Owen Grady (Chris Pratt) to come along so he can search for his favorite Velociraptor, Blue. Unfortunately, things are not as they appear, and Claire, Owen and their team find themselves in grave danger --- along with Blue and the other dinosaurs.

Pratt and Dallas Howard reprise their roles from JURASSIC WORLD, along with a very small role for Jeff Goldblum, who reappears as Dr. Ian Malcolm, and B. D. Wong as Dr. Henry Wu. While I love Pratt and his amusing, quirky style, essentially he's paying the same character here as he does in the GUARDIANS OF THE GALAXY franchise. And though there's nothing wrong with that, his shtick is going to start to wear thin --- if it hasn't already.

Dallas Howard is cute enough, but I find her performance is merely acceptable. She relates well to Maisie Lockwood (Isabella Sermon), Sir Lockwood's adorable granddaughter, but her chemistry with Pratt is non-existent. They share some delightful banter, but as far as real romantic feelings, I'm not buying it.

As for Sermon --- she is absolutely precious and a great little actor. She steals every scene she's

JURASSIC WORLD: FALLEN KINGDOM'S plot is barely average. The most fun is had when the "bad guys" get their due --- in very interesting ways. Of course, the ending opens the way for the third --- and hopefully last --- installment.

It's not a bad film, simply because the dinosaurs are so incredible! And the special effects, like the spewing lava on Isla Nublar, are truly fantastic. If you are a real fan of this franchise, you will love JURASSIC WORLD: FALLEN KINGDOM. If you're not --- totally understandable --- just skip it.

Pure and simple: JURASSIC WORLD: FALLEN KINGDOM is a winner! From the exceptional special effects, to Oscar recipient Michael Giacchino's exciting score, to a cast of characters to care about, the film is a sequel to embrace. And the carniverous dinosaurs have plenty to munch on. Our screening was in 2-D, but this movie begs to be seen in 3-D, something I rarely recommend.

Some of the wonders from Steven Spielberg's landmark original film in the series, JURASSIC PARK --- such as fast-moving creatures from a prehistoric era being propelled over, around and through the actors --- are necessarily repeated here. But JURASSIC WORLD: FALLEN KINGDOM incorporates some real human elements, like Owen's (Chris Pratt) touching reunion with Blue, his "pet" raptor, and a non-gushy reunion with dinosaur savior Claire (Bryce Dallas Howard).

New to the cast is Justice Smith (Franklin Webb), a young techno-nerd who has a terrible fear of flying, and is scared of just about everything else. But he is a key member of the team trying to transport the dinosaurs from Isla Nubar, under siege from a volcanic eruption. With his knowledge of how to wire anything they need, I kept thinking we could use this guy at home so that Vimeo links could be shown on our TV.

Making her screen debut is young Isabella Sermon as Maisie Lockwood, granddaughter of wealthy Sir Benjamin Lockwood (James Cromwell). She is excellent as the terrified little girl who must decide if Owen and Claire are actually her friends. She appears paralyzed with fear without overdoing it in one confrontation with the newest creature-fiend called an Endosaur.

Spanish director J. A. Bayona, along with his frequent cinematography collaborator, Oscar Faura, have created a fast-paced, tense adventure that moves briskly through its 128 minute running time. Word of mouth will propel JURASSIC WORLD: FALLEN KINGDOM to a successful run.