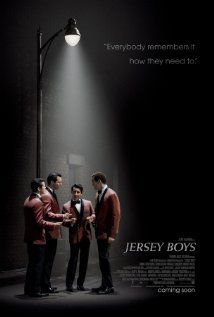 Fans who saw "Jersey Boys" live on stage will not be disappointed with the film version, directed by Clint Eastwood. In many ways the movie version is better, simply because of the inherent advantages that films have over theater in telling a story. It doesn't hurt that Oscar winner Marshall Brickman ("Annie Hall") co-wrote the smart script.

But the common denominator, of course, is the enduring music generated by The Four Seasons in the 60's and 70's, led by the incomparable falsetto voice of Frankie Valli, and the glorious harmonizing of the group. So if you're  Clint Eastwood, you obviously know that the success or failure of your movie venture depends on the casting of your lead singer. To ensure "Jersey Boys", the film, would not falter at the box office, Eastwood hired John Lloyd Young to play Valli.

Young performed the role on Broadway for over two years, which included capturing a Tony Award in 2006 for Best Performance by a Lead Actor in a Musical. But could Young duplicate his stage acting success on film? The answer is a resounding yes. Now 38, Young's performance in the movie is sensational. He must convey a wide range of emotions, and he does so convincingly.

Equally mesmerizing is Vincent Piazza as Tommy DeVito, the band's founder and resident bad boy. "Boardwalk Empire" fans will recognize Piazza as Lucky Luciano, and in "Jersey Boys" he has created a memorable character, much like Joe Pesci did in "Goodfellas". Coincidentally, Pesci's character was named Tommy DeVito, no relation to the singer.

Christopher Walken plays mobster Gyp DeCarlo. It's not a big part, but it's right up Walken's alley. It looks like he was enjoying himself immensely as part mentor, part father figure to the foursome. Other standouts are Erich Bergen as Bob Gaudio, the group's songwriter/keyboard player, and Michael Lomenda as bass player and singer Nick Massi. In actual Four Seasons' history, Bob Crewe was the group's chief lyricist and record producer, portrayed in the movie by Mike Doyle.

As much success as the group had over many years, including a number of Billboard No.1 Hits, there was much turmoil, both within the band and within their family lives. Much of this is described by the film actors talking directly into the camera, a la the play where the cast speaks directly to the audience.

The movie covers nearly 40 years of The Four Seasons' background, from the early days when the group struggled to be heard by studios, all the way to their Rock and Roll Hall of Fame induction in 1990. The makeup designed to age Young, Piazza and the others, is not particularly convincing as they arrive for their induction, but that is not a deal breaker.

I also would have liked a closing recap of The Four Seasons' accomplishments, such as total record sales, grosses and "where are they now?".

But clearly, the great appeal of The Four Seasons story --- the quartet changed their name from the Four Lovers, courtesy of a neon sign at a bowling alley where they performed --- is the irresistible music. "Jersey Boys", the movie, is a real crowd pleaser, and if you don't experience some goose bumps along the way, you're probably too young to remember the songs.