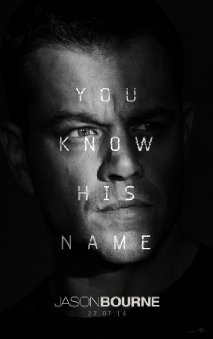 Matt Damon's fourth outing as rogue CIA operative Jason Bourne showcases a beefed-up Damon looking a little rough around the edges. I have always liked Damon, but after two hours and three minutes of almost non-stop --- and jerky camera --- action, and a script heavily-laden with fisticuffs, one has to wonder how many more of these Bourne films he can actually survive.

"Jason Bourne" has Bourne finally remembering who he is, and that he was present when his father, Richard Webb (Gregg Henry), dies in Beirut. Bourne had always thought Richard was a CIA analyst, but now he learns that his father devised a program that trained young men to be killers --- and that his own son was a prime candidate.

The CIA Director, Robert Dewey (Tommy Lee Jones), who was behind his father's death, is hell-bent on eliminating Bourne from the face of the Earth, especially after Nicky Parsons (Julia Stiles) steals the CIA file which details Bourne's past. Dewey dispatches his asset (Vincent Cassel), who is currently in Rome, to Greece to dispose of Parsons and Bourne. Dewey's protege, Heather Lee (Alicia Vikander), has taken a keen interest in Bourne, and plots to meet him in person.

Like most of these high-octane thrillers, "Jason Bourne" flits all over the map --- London is always a prime location --- with this sequel ending up in Las Vegas. And none of these films would be complete without the requisite lengthy car chase scene. "Jason Bourne" doesn't disappoint in this arena, but honestly, I am completely sick of these ridiculous mash-'em-ups. The asset is driving a Las Vegas SWAT team Humvee, while Bourne commandeers a Dodge Charger to chase him. Seriously, it is one of the longest, stupidest and most DESTRUCTIVE chases I've seen (full disclosure --- have not see any of the "Fast & Furious" films).

Guys will love this Bourne --- I am surprised David likes it as much as he does. For me, though "Jason Bourne" is well-acted, sporting a terrific cast, it's just another in a long line of supposed "thrillers" that just don't possess that certain excitement any more.

It has been nine years since the last Jason Bourne film starring Matt Damon, and truthfully, I wasn't looking forward to a fourth entry in the series. After all, what else could the super CIA agent --- turned former CIA agent --- possibly do to warrant our attention? It turns out... a lot.

"Jason Bourne" is without a doubt a rollicking wild ride, and despite an overly long, bordering on absurd, over-the-top car chase, the action is continuous. seamless and entertaining. It features limited dialogue by Bourne, who I don't remember cracking a smile. Come to think of it, no one else in the cast did, either --- no comic relief here. But the rest of the players minces no words when it comes to their focus on either eliminating Bourne or convincing him to return.

Vincent Cassel is a rogue agent referred to as the asset. He goes on a violent killing spree --- do we really need to see this? --- to get as close as possible to Bourne so he can avenge his imprisonment and torture, for which he blames Bourne.

The extremely buff Damon, now 45, opens the film with Bourne delivering a stunning one-punch knockout of a Serbian opponent. We are assured, in case there was any doubt, that he can handle himself in any situation. The movie crackles with excitement from that point on. But two-time "Bourne" director Paul Greengrass ("United 93", "Captain Phillips") overuses the hand-held camera technique, diminishing its intended effectiveness.

Despite its weaknesses, though, I can recommend "Jason Bourne" as a decent summer diversion. But this fourth entry in the franchise should be the final one.