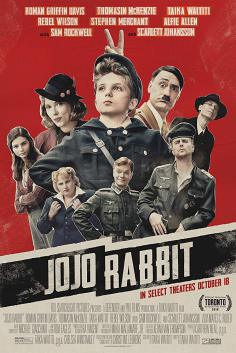 Lest you think JOJO RABBIT is a film about a little boy named Jojo (Roman Griffin Davis), who is thrilled to become a member of the Jungvolk --- The Hitler Youth --- and has an imaginary Adolf Hitler for his best friend --- well, you wouldn’t be totally wrong. From the brilliant mind of writer/director Taika Waititi, who gave us one of the best films of 2016, HUNT FOR THE WILDERPEOPLE, as well as the blockbuster, THOR: RAGNAROCK, JOJO RABBIT is an immensely entertaining movie that is at once funny, poignant and memorable.

Based on the book “Caging Skies” by Christine Leunens, which Waititi first heard about from his own mother, JOJO RABBIT is quite different from the book, which is decidedly more dramatic. Waititi has chosen to infuse his film with a great deal of humor, showcasing a theme of love transforming hate.

Jojo is a tender child who loves his mother, Rosie Betzler (Scarlett Johannson), deeply, and yet he yearns to be accepted by his fellow Jungvolk members. Instead, he is teased mercilessly and bullied. His loopy imaginary Adolf (Waititi) tries to help him along, constantly reaffirming his need to be a good German boy --- and to hate Jews.

It isn’t until he meets Elsa (Thomasin McKenzie), the young Jewish girl his mother has hidden in a wall in their home, that Jojo begins to question Adolf’s --- and his own --- beliefs. Elsa has quite a profound effect on Jojo, and all the hateful, repulsive lies told by the Nazis about the Jews now are beginning to seem absurd to poor Jojo. If even his dearest mother doesn’t buy the propaganda espoused by the Nazis, and Elsa, who is so beautiful and normal, then how can any of it be true?

There are some exceptional performances in JOJO RABBIT. First, and most important, is Jojo’s portrayal by 11-year-old Davis. Waititi and his team watched over 1,000 audition tapes until they found the Brit, Davis. To comment that he is remarkable is an understatement. He embodies the character of Jojo with an astuteness beyond his 11 years. And the bonds he develops with both McKenize and Johannson are incredibly believable, and at times heartbreaking. His is such a powerful performance, full of such immense awareness.

Though Johannson’s role is not a large one, it is extremely pivotal. Rosie loves her son with the fierceness of a devoted mother, even though she is dedicated to her work, which Jojo knows nothing about. Her attempts to keep him safe --- and loved --- despite not having a father around are heart wrenching and Johannson makes us feel every moment. It’s an inspired performance.

McKenzie, who had a breakout role in last year’s LEAVE NO TRACE, is mesmerizing as Elsa. Her life is totally dependent upon Rosie --- and

Jojo, who is the most likely to turn her in. His misunderstanding and misinformation regarding Jews are a peril for her. She slowly educates Jojo in the errors of his --- and Adolf’s --- thinking. She’s lovely and kind, and yet determined to live.

The other roles of note belong to Sam Rockwell who plays Captain Klenzendorf, Archie Yates, who plays Jojo’s best real-life friend, Yorki, and Waititi in a marvelous turn as Hitler. These three add incredible depth to JOJO RABBIT because each of these portrayals is so crucial to the success of the film.

Rockwell, who always delivers an amazing effort, is perfectly suited as a German officer questioning his lot in life. Following the loss of an eye in what Klenzendorf himself calls “Operation Screw-Up”, he is relegated to training the young members of the Hitler Youth. He is at times a mentor and a confidante to Jojo, but he’s also not one to take all this Nazi business too seriously.

Yates and Waititi both provide a lot of the comic relief. Though Yates is the adorable clueless BFF, Waititi’s role is definitely not based on the historical figure. Rather, Waititi has written him as Jojo’s imaginary friend who is limited to what a 10-year-old knows and thinks he believes. And as Jojo grows and changes during JOJO RABBIT, Adolf becomes smaller and sadder --- and more unraveled, playing to Waititi’s crazy side.

JOJO RABBIT is an immensely important film to see, especially for children. It is vastly imperative that we never forget this very dark, hate-filled time in our history. JOJO RABBIT brings it all to light in a way that is less overwhelming, but manages to remind us with humor. Waititi has done a wonderful job telling this story.

JOJO RABBIT is highly entertaining and it is awash in originality. Such accolades should not be taken lightly since the subject matter revolves around the Holocaust --- not the death camps, specifically, but the German indoctrination of young minds.

Portraying one of those youngsters is Roman Griffin Davis as the title character Jojo. This is his initial acting job of any kind --- he was 11 at filming. As we all know, a solid performance by a child actor can make a film, just as a poor one will sink it. But young Davis is certainly up to the task, in fact he seems mature way beyond his years.

Early on, Jojo is a devoted Nazi, Heil-Hitlering with the best (or worst) of them. He even has an imaginary friend, Adolf, hilariously played by Waititi. He looks like the real thing, but Waititi, whose grandfather fought the Nazis in WWII, plays Adolf like a buffoon.

The tide in Jojo’s belief system starts to turn when the group of Nazi recruits, headed by Captain Klenzendorf (Rockwell), tries to goad him into killing an innocent wild rabbit. He refuses, runs away and his nickname is born.

Jojo is further conflicted when he discovers that his mother, Rosie (Johansson), has hidden a young Jewish girl, Elsa (superbly played by Thomasin McKenzie), in their home. Waititi wanted to cast a pretty girl to play Elsa to dispel Jojo’s brainwashed belief that Jews are heinous creatures with horns on their heads. The evolving friendship between Jojo and Elsa is special to behold as the movie unfolds.

Furthermore, Waititi, who based his screenplay on the book “Caging Skies” by Christine Leunens, wanted to create a story about the rise of the Nazis from a young person’s perspective. He talks about parents, as the adults in the room, being responsible for teaching children right from wrong. After all, kids aren’t born as racists, neo-Nazis or white supremacists (not to be redundant), but they do learn from family and friends.

JOJO RABBIT is not all fun and games, however. There definitely is a sobering, and somewhat chilling, aspect to the film. Waititi’s use of black-and-white archival footage depicting cheering throngs of young Germans smiling, saluting and regaling Hitler is certainly disturbing. This unbridled admiration worthy of a rock star is a sobering sight.