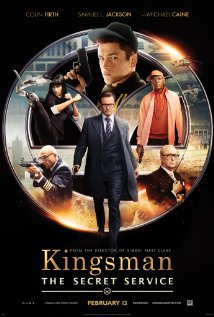 the illustrious name Valentine, played by Samuel L. Jackson. His plan to solve global warming by eliminating masses of people is a particularly wry new twist.

A technology genius with way too much money, and a penchant for McDonald's cheeseburgers (talk about product placement), Valentine has devised a sinister plot to save his world. His trusty sidekick, Gazelle (Sofia Boutella), is a martial arts expert and lethal assassin who possesses sharp blades for feet.

When Gazelle slices one of the Kingsman in half --- literally --- Harry Hart (Colin Firth), better known as Galahad, infiltrates Valentine's organization to learn of his nefarious plan. Galahad's protege, Eggsy Unwin (Taron Egerton), must compete for the open seat at the round table of Kingsman led by Arthur (Michael Caine).

It's a brutal competition, but one which trains the young men and women in the art of survival, and all of the attributes necessary to be a member of this elite group. It turns out Eggsy isn't able to complete the very final task, but after Galahad is out of commission, he must join Merlin (Mark Strong) and Roxy (Sophie Cookson), the competition winner, to save the day.

Based on the comic book, "The Secret Service", created by Dave Gibbons and Mark Millar, "Kingsman: The Secret Service" is directed by Matthew Vaughn, who co-wrote the screenplay with Jane Goldman. It certainly lives up to its billing as spy action comedy, with an emphasis on action. Vaughn, no stranger to fast-paced films with a resume including "Kick-Ass" (2010) and "X-Men: First Class" (2011), has provided the audience with quite a wild ride with virtually no down time.

Firth is the consummate gentleman, which is exactly what the Kingsman purport to be --- and how they dress. Utilizing a Saville Row tailor shop as their stylish headquarters, Galahad explains to Eggsy just how important a perfectly tailored suit and oxford shoes "make" the spy. And there is no one better equipped, at the moment, to portray the elegant Galahad than Firth.

His tsk-tsking at Eggsy is all great fun, along with the well-choreographed and uber-slick scenes of hand-to-umbrella combat. Firth is brilliant, and so delightful in a role such as this. His dry wit and charm are right on target for Harry Hart.

Jackson plays the maniacal Valentine with aplomb. You can tell he's having a blast --- I'm sure the entire cast enjoyed all of the hi-jinks. His lisp is a hilarious new feature --- but his aversion to blood is even funnier. Reminds me of someone else I know --- Olivia?

Egerton fits in nicely with the rest of the gentleman spies, with a cool demeanor and certified cockiness necessary for such a career choice. This is his first starring role and it appears he has a nice future in films.

My only complaints about "Kingsman" are: (1) the prominence of McDonald's poor food choices, especially considering their refusal to offer a fair wage to their employees. Perhaps they spent the extra moolah for this placement thinking it would revive their sagging sales --- hope not. (2) The sexual situation at the end of the film between Eggsy and a Swedish princess. Where the hell did that come from --- totally inappropriate, and incongruous with the rest of the movie. Weird ---

Other than these minor flaws, "Kingsman: The Secret Service" is a fun, imaginative and highly entertaining adventure. But, then, in my book, any film with Colin Firth is a winner!

For an early-in-the-year release, you can't do much better than "Kingsman: The Secret Service". Boasting a veteran cast of Colin Firth, Samuel L. Jackson, Mark Strong and Michael Caine, it's literally a "mind-blowing" experience. And it features a break-out performance by Taron Egerton as the young recruit, "Eggsy" Unwin. It's also quite violent. In fact, the body count is so high the only element missing is Uma Thurman.

Firth belies his age as the efficient fighting machine of Kingsman, a secret intelligence organization that uses Knights of the Round Table monikers to identify key personnel.  Firth's character is known as Galahad, Strong is Merlin and Caine is Arthur. When Lancelot (Jack Davenport) meets an early demise, Kingsman must replace him. To do so, a group of youthful candidates is put through often-terrifying feats of physical and mental duress to weed out the lone recruit that will become the new spy.

The movie is highly entertaining and innovative, replete with tense scenes, and although the violence is obviously over-the-top, the fight sequences are well staged. Director Matthew Vaughn dips into his "X-Men" and "Kick-Ass" bag of tricks to showcase the almost-laughable fisticuffs and mayhem. Collaborating again with Jane Goldman as his co-writer, Vaughn's bombastic and non-stop action sequences are a lot of fun to behold.

Jackson plays Richmond Valentine. an uber-wealthy philanthropist who, on the surface, appears to be the benevolent donor of free internet/cell phone service to everyone on the planet --- forever. But it's really a scheme to deplete the Earth of its overpopulation problem, according to his own set of rules. Jackson revels in the role, complete with a noticeable lisp, and a henchwoman --- the nastiest femme fatale on no feet --- played by Sofia Boutella. She sports razor-sharp, bouncy blades to get around, and did I mention she is nasty?

There is hardly a moment to breathe, but the action is sustained with unique sequences, not the least of which challenges the recruits in situations where death by drowning or jumping out of an airplane severely test their mettle. When they find themselves tied to railroad tracks to assess their loyalty to Kingsman, it's a nail biter when the speeding train approaches.

"Kingsman: The Secret Service" surprises early and often. The death of a major character is unexpected, and Mark Hamill of original "Star Wars" fame has a small role. Even the clever opening credits will have you glued to the screen. But I can't say enough about young Egerton's performance. He hits all the right notes, and his handsome face and muscular physique will serve him well in future roles.

In a recent TV interview, Firth revealed he had trouble for awhile in his fight scenes because the actors he needed to dispose of were all "very, very nice". I can tell you he got over that in fine fashion.