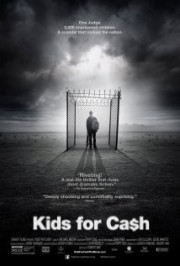 Shocking, disturbing and downright frightening describes what was happening in Luzerne County, Pennsylvania back in the post-Columbine school-shooting era. An over-zealous Juvenile Court Judge named Mark Ciavarella, known for his "zero tolerance" stance regarding children who break the law, had been locking up all types of "offenders" and throwing away the keys.

"Kids for Cash" was also how this heinous scandal came to be known in the media. Ciavarella had run for judge on this zero tolerance policy, and was highly regarded in the community by law enforcement, educators, and most of his constituents. They all embraced his tough outlook on juvenile crime because people were still reeling from the Columbine tragedy.

However, in the process, many young people were given extremely harsh sentences for very minor offenses, and sent away to a facility built with private funding. The then-current detention center in LuzerneCounty was decrepit and falling down. Another judge, Michael Conahan, known for his ability to "arrange" such things, got funding and had built a new institution to house all of the kids Ciavarella was incarcerating.

But what really sealed Ciavarella's and Conahan's fate was the fact that they both accepted "finder's fees" for the construction of the new detention center to the tune of millions of dollars. The money became their downfall, not the fact that over 3000 children were locked up for unwarranted extended periods of time.

Filmmakers Robert May and his producing partner Lauren Timmons were actually in the region working on another project when this story broke in January 2009. They were riveted by the sensationalism of this saga, then determined that it was something that demanded its own documentary. May and Timmons wanted to present the real-life traumas of a representative cross-section of these victims on screen.

Not everyone involved wanted to participate, but May was able to put forth gut-wrenching experiences of several children. One such alleged perpetrator was Charlie, a 14-year-old, who wanted a motor scooter. His parents couldn't afford a new one, so they found a used one for $200. Unbeknownst to them, it was stolen. The police arrested Charlie, but his parents were told he would go to a juvenile court and receive a minor sentence. But instead Judge Ciavarella sent him to "CampAdams", the new center, where he remained for five years. Charlie's life was essentially ruined.

As you're watching all of this, you repeatedly think --- how can this happen? And how can this happen in 2009 in the United States? Children were sent away time after time without legal representation. Parents were consistently duped into signing away their children's rights by people who should have warned them of the dire consequences these children were facing. At one point in the film, one of the young girls who was imprisoned asks how this happens --- she observes that everyone has watched "Law and Order" on TV --- you know you should always ask for a lawyer.

It is a fact that in 54% of these cases no lawyer for the defense was present. However, as May points out, there was an officer of the court in the room --- the prosecutor. Why did he/she not complain about the judicial abuse --- or the court staff, social workers, probation officers? Because everyone went along with Ciavarella's policy despite the overly harsh sentences and the ruination of so many lives.

Lest you think that "Kids for Cash" is totally one-sided, May does interview both Ciavarella and Conahan. Each, of course, defends their actions, though Ciavarella  admits that not paying taxes on his kickback was his only sin. There is virtually no remorse for the lives he has destroyed.

There are many other good stories contained within "Kids for Cash", not just the ones concerning the children. A local journalist, Terrie Morgan-Besecker, played a huge role in uncovering this unsavory chapter in her town's history. Had it not been for her and a few others, Ciavarella might still be presiding over juvenile cases today.

May does a marvelous job laying out this horrific scandal in "Kids for Cash". It's a reminder to all to be more vigilant when it comes to our children.

Could something like this happen in your town? If your child was brought before a judge for a relatively minor offense, and ultimately sentenced to months, or even years, to a juvenile detention facility, would you fight the system?

Charlie is a 14-year-old boy who is given a motor scooter by his parents that turns out to be stolen property. Police officers eventually arrest him and his parents. The charges against mom and dad are dropped, but the boy is sentenced to a juvenile facility where he spends five years! Amanda, also 14, gets in a fight at school, appears before the same judge, and like Charlie, spends five years in a detention facility.

In the wake of the Columbine shootings of 1999, a regional judge in rural northeastern Pennsylvania pledges to keep the schools free of "bad kids". The searing documentary, "Kids for Cash", features extensive interviews with several victims, their families, and amazingly, the two publicly-elected judges at the center of the scandal, plus a child advocacy group called the JuvenileLawCenter.

The movie opens with a news conference where newly-elected Juvenile Court Judge Mark A. Ciavarella pledges to keep the county's schools safe by prosecuting juvenile offenders under his zero tolerance policy. It's an impressive show of authority, and it is enthusiastically embraced by his supporters. We also see a fuzzy clip of one of the Columbine shooters walking through the school with a high-powered rifle. Soon enough we can draw the parallel that this judge has over-reacted to Columbine to an absurd extent.

But with the punishment meted out by Ciavarella clearly out of line with the crimes of these kids, how could this go unnoticed? How could court officials stand idly by, case after case, and not do anything, or at least question the proceedings?

It wasn't until 2009 that a Scranton newspaper reporter, Terrie Morgan-Besecker, broke the story that  Ciavarella, along with friend and fellow judge Michael Conahan, were involved in a kickback scheme where Ciavarella and Conahan received "finder's fees" for a new private juvenile detention facility called "CampAdams". This was not small potatoes --- the dollars exchanged were several million. Yet Ciavarella amazingly maintains he did nothing wrong except fail to pay taxes on his "income".

Radio talk show host Steve Corbett kept up the heat while the investigation was on- going. We see studio clips of his relentless crusade. And vitally instrumental in achieving justice in the sordid affair are Marsha Levick and Robert Schwartz, founders of the JuvenileLawCenter in Philadelphia which has grown into an internationally recognized organization for children's rights. In all, they reversed and expunged the cases of 2480 kids put away by Ciavarella. But sadly, in many cases, the effects on the incarcerated teenagers are long lasting, even tragic.

Producer and first-time director Robert May has been a producer of other fine films, including the excellent documentary "The Fog of War", about former U.S. Secretary of Defense Robert McNamara, and one of Jeanne's all-time favorite movies, "The Station Agent", starring two of her favorite actors, Peter Dinklage ("Game of Thrones") and Bobby Cannavale. So it comes as no surprise that "Kids for Cash" turns out to be an extraordinary feat.

Do Ciavarella and Conahan have their day in court? Oh yes --- but you'll have to see the movie to learn the outcome.