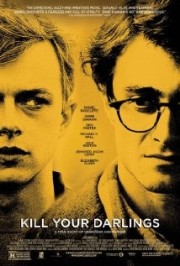 Youthful adults and teenagers who only think of Daniel Radcliffe as Harry Potter will most likely be unaware of the existence of Radcliffe's latest character, Allen Ginsberg, a famous poet borne out of the Beat Generation in the 1950's.

"Kill Your Darlings", directed by John Krokidas, who co-wrote the script with Austin Bunn (coincidentally, these two were roommates at Yale), brings to life the relationship between Ginsberg and his fellow compatriates, Lucien Carr (Dane DeHaan), Jack Kerouac (Jack Huston) and William S. Burroughs (Ben Foster).

In 1944, Ginsberg begins at ColumbiaUniversity in New York City, leaving behind in Paterson, New Jersey, his unfulfilled father, Louis (David Cross) and his mentally ill mother, Naomi (Jennifer Jason Leigh). Despite his mother's pleadings not to leave, Ginsberg follows his frustrated-poet father's advice and accepts his opportunity to follow his dreams.

Though he is shy and reserved, Ginsberg catches the eye of fellow Columbia student, Carr, a handsome rabble-rouser, who takes Ginsberg under his wing. Together with Burroughs, they spend their nights drinking, jazz-clubbing and crashing parties, specifically those at the apartment of David Kammerer (Michael C. Hall), a slightly older man obsessed with Lucien. Kammerer once held Carr's favor, the way Ginsberg does now, and he resents Allen greatly.

Along the way, Carr becomes enamored with Kerouac, another hard-drinking writer, who dropped out of both Columbia and the merchant marines. He lives, unmarried, with Edie (Elizabeth Olsen), who tries, in vain, to make Jack settle down. But the four of them, known as the "Libertine Circle", are hell-bent on savaging tradition and defying authority. Meanwhile, Kammerer is becoming more and more desperate to win Carr back.

Krokidas and Bunn have penned a beautiful script, replete with the look and feel of the 1940's New York jazz scene, and the bohemian lifestyle just coming into vogue. The dialogue is well-paced and invigorating, especially when delivered by this extremely accomplished and youthful cast.

Everyone is on their game here. Radcliffe is marvelous, leaving behind all traces of HP. It's a quietly nuanced performance, and if the field weren't already overly crowded, I would suggest he could be a contender come Oscar season for Best Actor.

DeHaan is a marvel. It's no wonder both men and women are drawn to him as Carr, especially in an era when homosexuality was not at all accepted, in almost every circle of society. His emotional scenes with Radcliffe are quite moving, decidedly when he's throwing over Ginsberg for Kerouac.

Though much of this true story is already known, I am not going to write about the ending of "Kill Your Darlings". These young men were so complex and original in their thinking and writing. The tragic circumstances that brought them closure as a group should be witnessed on film.

Krokidas has directed a gorgeously photographed film by Reed Morano. And his selection of Hall to portray the outsider Kammerer is a stroke of genius. Hall has never been better and I am hopeful for his continued success after his reign as Dexter.

If there was ever any doubt that Daniel Radcliffe has shed his Harry Potter persona, his game-changing, daring performance in "Kill Your Darlings" will settle that once and for all. Radcliffe portrays the real-life Beat poet of the 1950's, Allen Ginsberg, whose radical ideas about homosexuality, communism and other subjects made him a hero among America's liberal generation.

But the movie only covers Ginsberg's early years as a college-bound freshman in a Jewish home in New Jersey, with a poet father (David Cross) and a mentally challenged mother (Jennifer Jason Leigh). When Ginsberg enters Columbia University in New York in 1944, he meets Lucien Carr (Dane DeHaan), a reefer-smoking rebel who flaunts traditional values, and is the conduit through which Ginsberg meets other soon-to-be-famous Beat writers Jack Kerouac (Jack Huston -  masked man Richard Harrow  of "Boardwalk Empire") and William S. Burroughs (Ben Foster).

Michael C. Hall ("Dexter") is David Kammerer, Carr's older admirer, who hovers around just to be close to the object of his infatuation. When Carr spurns Kammerer's advances, their relationship will ultimately have dire consequences, and Ginsberg will find himself in a devastating moral dilemma. As for Carr, DeHaan's turn is stunning, simultaneously sympathetic and disturbing.

Meanwhile, Ginsberg is initially portrayed as a somewhat naive individual, only hinting at homosexuality. That will change as the film moves on, and Radcliffe gives a rather startling performance as the youthful innocent who adopts the life style of his rebellious classmates.

"Kill Your Darlings" is a microcosm of Allen Ginsburg's college beginnings, and indeed covers the period in Jack Kerouac's life prior to him writing his most famous piece, "On The Road". It's a slice-of-life film, artfully staged by first-time feature director John Krokidas (co-writer with Austin Bunn).

Radcliffe is clearly the headliner in this cast, but it's an admirable acting tour de force by a solid ensemble group. "Kill Your Darlings" is hardly light entertainment, but for the serious moviegoer it is worthy of your time.