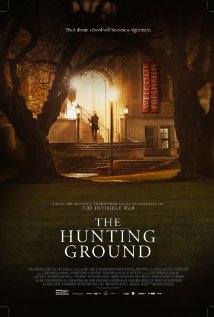 First came "The Invisible War" by Kirby Dick about sexual assaults in the military. I thought that was a remarkable documentary that should have been required viewing for every member of Congress so they could pass some much-needed legislation. Now Dick has written and directed "The Hunting Ground" about the rape epidemic on college campuses. And it should be seen by every student, female or male, before entering college.

The statistics are alarming and dreadful: one in five women are assaulted, only five per cent of campus assaults are reported, serial predators are responsible for 91% of all sexual assaults on campus, one in 33 college men will be sexually assaulted --- and the most disturbing fact is that in 2012, 40% of all colleges reported NO rapes.

Much of "The Hunting Ground" follows two survivors, Annie E. Clark and Andrea Pino, both graduates of the University of North Carolina at Chapel Hill. When they were each first attacked and tried to report their rape, neither was taken seriously and neither received any justice from the university.

Andrea turned to Annie, who was already out of college, for support, and together they co-founded End Rape On Campus (EROC), and began traveling the United States to meet, counsel and organize other survivors. They researched Title IX and Andrea filed a complaint with the Department of Education against UNC. Today 82 colleges are being investigated for violations of Title IX.

But the crushing focus of "The Hunting Ground" remains the harrowing stories told by very courageous young women and men who survived their horrific ordeals, only to be subjected to further degradation by their schools, and the officials who turned a blind eye to the mounting problem. One particularly poignant and heartbreaking moment occurs when a young man describes his mother immediately jumping on a plane to be by his side. Many of these students never told their parents.

Dick and his producer Amy Ziering, who co-wrote "The Invisible War" with him, have presented this shocking expose in a manner that no one can refute. Rapes on campuses are at an alarming high --- "it is believed that more than 100,000 college students will be sexually assaulted during the coming school year".

We are way past the time for pandering. Colleges and their administrations must be held accountable. No longer should even one victim of sexual assault be treated in the manner evidenced here.

Occasionally a sexual assault on a college campus makes headlines, as it did three years ago at Notre Dame. But the filmmakers responsible for "The Invisible War", the Oscar-nominated documentary about rape in the military, have unleashed a new expose called "The Hunting Ground". It reveals the rampant --- described as epidemic in the movie --- sexual assaults at universities, large and small, all over America.

The film is disturbing, frustrating and infuriating --- and ultimately inspiring. Although it's predicted that as many as a staggering 100,000 students, primarily women, will be rape victims this year, the movie offers hope that change is in the air. Studies show that one in five women, and one in 33 men, are likely to be victimized.

Thanks to the efforts of two female survivors at the University of North Carolina who refused to blindly accept their ordeal, a large number of schools are now subject to investigation for violating an act called Title IX, wherein colleges are bound to ensure the safety of their student body. The pair, Andrea Pino and Annie Clark, also established an on-line rape survivor network, and their courage and persistence, along with others, were saluted by President Obama.

"The Hunting Ground" is an important movie that should be a certain contender for an Academy Award. And it should be mandatory viewing on college campuses everywhere, particularly by students within the Greek system. A fraternity member is three times more likely to commit a sexual offense, and a sorority member is "significantly" more likely to be assaulted, versus non-Greek system undergrads.

The doc highlights, specifically, Sigma Alpha Epsilon (SAE) as a frat with a terrible reputation. Students at a variety of schools deride it as "Sexual Attack Expected". It's ironic since SAE on the University of Oklahoma campus was just expelled for a racial rant caught on video.

University presidents are shown to be hypocrites for proclaiming their concerns over sexual attacks, yet they do nothing about these crimes to preserve their school's reputation. Their goal? Ensure that applications from would-be freshmen keep coming, and more importantly, that huge donations, like the $350 million Harvard received, still continue.

We hear from rape victim Erica Kinsman, once a student at Florida State, who reported she was raped by the football team's star quarterback, Jameis Winston. He led the team to a national championship in 2014 and won the Heisman Trophy as a freshman. Winston was not charged, and even though his DNA matched the rape kit Erica completed a year earlier, neither the Tallahassee police, nor the district attorney, nor the school, found any cause to prosecute him.

But the saddest story of all is told by Tom Seeberg, the father of Lizzy, a St. Mary's College student (sister school to Notre Dame) who was raped by a Notre Dame football player. Her complaint fell on deaf ears. Ten days after the incident, in September 2010, Lizzy Seeberg, an 18-year-old freshman, committed suicide. A text she received before her death included a threat that "messing with Notre Dame football is a bad idea."

Studies also show that a small minority of perpetrators commit the vast majority of sexual attacks. Yet accused rapists almost always go unpunished, and if they are, penalties can be as minimal as a one-day suspension, or writing a book report. If it wasn't so sickening it would be laughable.

Lady Gaga co-wrote and sings the very poignant and beautiful "Till It Happens To You", during the film and over the closing credits.

"The Hunting Ground" is a movie that should be resurrected every year for viewing by high school seniors. Its message of hope is heartening. Yet, after watching this expertly constructed film by Kirby Dick and Amy Ziering, it's hard to shake a lingering feeling of despair that any forthcoming change may only be temporary. After all, every year a college welcomes new, unsuspecting students. But college presidents will always be there.