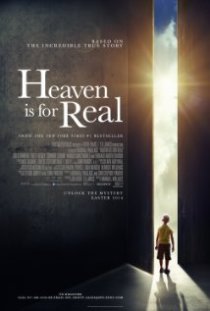 Though Greg Kinnear is older than Todd Burpo was when all of this was happening to his family, detailed in the film "Heaven is for Real", he has always had that incredible youthful look. Thus he is perfect for the role of real-life beleaguered father, husband, pastor, small business owner and volunteer fireman. In anyone else's care, this touching portrayal could have been overly sentimental, and ruinous to the film.

If you have not read the New York Times 2010 #1 bestseller, of the same name, then you should. It's a quick read and a wonderful story. The movie manages to follow Burpo's book, co-authored with Lynn Vincent, fairly closely, and not even Hollywood can diminish the extraordinariness of the "miracle" within.

At the age of four, blond, blue-eyed Colton Burpo (Connor Corum in his feature film debut), boy with a big smile, becomes desperately ill. He is rushed by his parents Todd and Sonja (Kelly Reilly) to the hospital where it is determined he has a ruptured appendix. Though the doctors are wary, Connor makes a miraculous recovery, and is soon home with his parents and older sister Cassie (Lane Styles).

It isn't until sometime later that Colton begins to relay his experience of going to heaven and back during his life-and-death surgery. At first, Todd and Sonja write his accounts off to his brilliant imagination. But once Colton describes meeting relatives he couldn't possibly have known, the mystery deepens, and Todd, as a pastor, must reconcile some rather dubious questions, not only for his family and himself, but for his congregation.

Directed by Randall Wallace, the Academy Award-nominated screenwriter for "Braveheart", and also the co-adapter of this screenplay with Christopher Parker, "Heaven is for Real" has the right amount of joy and pathos to keep it believable and entertaining. I have already praised Kinnear for his remarkable, easy-going performance. And Corum is simply too adorable for words. His eyes are so beautifully blue he may one day rival the late Paul Newman.

But  it isn't just about his eyes or his sweetness. This little boy has a gift --- a naturalness --- in front of the camera. Corum's acting is so effortless that even Kinnear joked "It really makes me mad." And since "Heaven is for Real" is all about this child, a lesser actor would have spoiled the film.

The real-life Burpos are thrilled with Wallace's screen adaptation, which is also a plus. I would have preferred less time spent on the struggles of Todd and Sonja, and more on Colton's startling revelations. There are a few, and especially in the book, they are doozies --- things that a four-year-old could not possibly comprehend without help from heaven.

"Heaven is for Real" is additionally aided by astounding photography form Dean Semler, an Oscar-winning cinematographer for "Dances With Wolves". Instead of Nebraska, where the Burpos reside, the movie was shot in Winnipeg, Canada, and it is breathtaking. This is truly a film the entire family can watch and treasure.

There is only one way that a movie about a little boy who claims to have gone to heaven can be successful. The little boy must be believable. "Heaven is for Real", the film version of the New York Times #1 Best Seller by Todd Burpo, passes the test in convincing style.

In 2003, Colton Burpo, the nearly four-year-old son of Todd, a small-town pastor in Nebraska, underwent emergency appendectomy surgery. But the situation proved to be more serious than anyone expected. As his vital signs were sputtering, doctors were not optimistic that he would pull through. Todd (played by Greg Kinnear) and Colton's mother, Sonja (Kelly Reilly), sat devastated in the waiting room.

But survive he did, and little Colton would tell an amazing story in the coming months. He would relate to his parents that he visited heaven where winged angels sang to him; that he spoke to Jesus and even sat on his lap; that he met relatives of whom he had no prior knowledge. He also repeated conversations between his parents and the medical team, occurring out of sight and earshot of his hospital bed, that he could not have possibly overheard.

If these were the musings of an older child, skeptics could say that these are merely fabrications of someone who may or may not have had a near-death experience. But a four-year-old has neither the motive, nor the frame of reference, to make up such events.

I did read the book, and I can positively say that the film version, directed and co-written by Randall Wallace (Oscar nominee for Best Screenplay: "Braveheart") does an excellent job keeping to the story. The cast is superb. It is Kinnear's best performance in years, Reilly is convincing as Sonja, and supporting roles of friends Nancy Rawling and Jay Wilkins are admirably filled by accomplished actors Margo Martindale and ThomasHadenChurch.

But without the astounding turn by five-year-old newcomer Connor Corum as Colton, "Heaven is for Real" might as well be a made-for-TV movie on the Disney Channel. Now six, this adorable, unaffected, blond-haired, blue-eyed child (who answered the casting call in his hometown of Cleveland), is so credible in the role, speaking the words of the real Colton, that moviegoers will be hard pressed to deny the veracity of it all.

As Todd, Kinnear nails the inner turmoil of the conflicted pastor. He confronts his own doubts about basic religious tenets that he has preached for years. Deeply in debt, and on the verge of losing his church, Pastor Burpo must find the strength of his convictions through the love of his family, and the support of his tightly-knit community.

I suspect that curiosity will drive the box office because the Burpos' story asks universal questions like "What happens when we die?" and "Is there a heaven and a hell?" Of course, little Colton doesn't address the hell part of the equation, but he certainly makes a strong case for heaven.