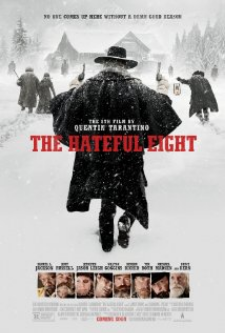 Despite David's lengthy review, and because I have little or nothing positive to say about "The Hateful Eight", other than the spectacular cinematography and original score, my words are brief.

"The Hateful Eight" is grotesquely violent and full of misogynists. I am overwhelmingly tired of Quentin Tarantino's shtick. I cannot and will not condone the amount of bloodletting in this film, thus I cannot recommend it.

When a one-hundred and eighty-seven minute movie holds your interest --- literally for every second --- that says a lot. I have now seen Quentin Tarantino's epic "The Hateful Eight" twice, and enjoyed it even more the second time. Billed as his eighth film, it is also his best, and that includes the likes of "Inglourious Basterds", "Django Unchained" and "Pulp Fiction".

Largely a dialogue-driven western, unique to Tarantino, the film is full of memorable turns, especially from Samuel L. Jackson, Jennifer Jason Leigh and Walton Goggins. After a stirring introductory overture, courtesy of five-time Oscar nominee and multiple Golden Globe winning composer (including the recently aired 2016 Globes for this film) Ennio Moricone, the first segment sets up the suspenseful and bloody second half. "The Hateful Eight" could almost be considered a black comedy, rife with humor, thanks to the irresistibly compelling original screenplay by the director.

Bounty hunter John "The Hangman" Ruth (Kurt Russell) is riding stagecoach en route to the town of Red Rock, somewhere in Wyoming, post-Civil War, escorting his valuable captive Daisy Domergue (Leigh) so he can cash in on the hefty price on her head. Amidst a fearsome blizzard, they pick up Major Marquis Warren (Jackson), a former Union cavalryman, now a bounty hunter himself, and soon after, Chris Mannix (Goggins in a tour-de-force performance) who claims to be Red Rock's new sheriff.

When they seek food and shelter at Minnie's Haberdashery, they are met by four scurrilous individuals, colorfully named (by Tarantino) Joe Gage (Michael Madsen), Oswaldo Mobray (Tim Roth),General Sandy Smithers (Bruce Dern) and Bob (Demián Bichir), okay, not so colorful. There is

a distinct air of suspicion around this group, and Tarantino doesn't disappoint, as he incorporates a myriad of surprises in his film.

This has to be Jackson's finest hour. The major's re-telling of the day he ran into General Smithers' son is worth the price of admission itself. Ruth's physical abuse dished out to Daisy should be repulsive, but somehow it is quite hilarious. Dern's curmudgeonly countenance, as he sits firmly rooted in his easy chair, and the constant howling of the wind, reminding us of the blizzard outside, add to the surreal atmosphere of the goings-on at Minnie's.

In this group of veteran players, it would be almost impossible to steal the show, but that's what Goggins, known mostly for TV's "The Shield", manages to do. He is an absolute hoot, spicing up every word of dialogue he's given.

Tarantino's reputation for over-the-top violence is only enhanced here, although it pales next to some of his past efforts, like the "Kill Bill" duo and "Django Unchained". But at least he appears to use real blood in "The Hateful Eight" as opposed to the pinkish-hued stuff in "Django". And his use of violence here, while especially graphic, is not all gratuitous. In one scene, a single bullet is all it takes to eliminate one of the characters.

This is obviously not a film for everyone. With all the gun carnage in everyday life, a part of me decries such violence in the movies, but let's face it --- like sex, nudity and foul language, violence will always be part of Hollywood. Nonetheless, if you're a Tarantino fan, "The Hateful Eight" is a  must see on the big screen.