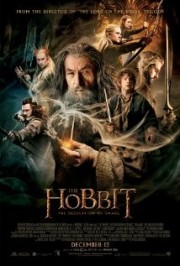 The term genius is overused these days, but I cannot think of a better word to describe director Peter Jackson and his breadth of vision which brings J.R.R. Tolkien's work to life. In this, the second of a trilogy to complete the film adaptation of "The Hobbit", the action is virtually non-stop and the special effects are truly that --- special!

We have become so inured by digital effects that it is difficult to still be in awe when something really dynamic comes along. But the artists at Weta Digital, a New Zealand company founded by Jackson and others in 1993, have become so masterful at their crafts that I believe many of us moviegoers take them for granted --- and we should NOT!

The cast of "The Hobbit: The Desolation of Smaug" is phenomenal, with many of them feeling like old friends by now. But Smaug, the fire-breathing dragon, is another story. Voiced by the incomparable Benedict Cumberbatch, who starred with Martin Freeman (Bilbo Baggins) in the most recent "Sherlock" series on BBC, this dragon is of enormous dimensions and a creative wonder.

My nephew and his siblings are HUGE "Lord of the Rings" and "Hobbit" fans (to put it mildly), and he had given me the heads-up about Smaug, as David and I were out of the country and missed the advance screening. I had forgotten his praise of the fiery beast until I witnessed Smaug for myself.

One scene has Smaug awash in liquid gold --- a terrific and terrifying sight --- pure golden joy! When I read some of the other critics' opinions of this film, I am truly baffled. "The Hobbit: The Desolation fo Smaug" is brilliant filmmaking, if for no other reason than Smaug.

But there are other reasons --- this is simply one of the best films of the year. I delight in watching Ian McKellen as Gandalf over and over in these films --- and  this time he has his hands full, literally, with the dark side. It's easy to forget that Tolkien wrote this as a children's book, but seeing Gandalf struggle with his moral dilemma brings it all back. There are lessons to be learned here --- lest we forget who our friends are.

Whether you are a fan of all things Middle-Earth or not, Jackson's ode to Tolkien is a must-see for the rousing, humorous, visual spectacle that it is. There aren't many films that can enthrall David and keep him awake during the middle of the afternoon, but this is certainly one of them. You will not be more entertained at the movies this year.

Up to now, my favorite Peter Jackson movie was "King Kong", his 2005 remake that won three Oscars for technical wizardry. Well, the big guy

(the ape, not the director) can step aside because Jackson's second film of his trilogy, adapted from the J.R.R. Tolkien classic, is as much fun as I've had at the movies in recent memory.

Jeanne can tell you that these phantasmagoric, huge-screen epics usually leave me sleepy and yearning for the closing credits. My apologies to "LOTR"

fanatics --- you know who you are --- but this critic actually followed the exploits of Bilbo Baggins, Thorin Oakenshield and the battles with Smaug without a single nod of drowsiness. (I can't believe I actually typed Bilbo Baggins, Thorin Oakenshield and Smaug without referring to any notes --- there is hope for me yet). For those of you who may be clueless, Smaug is the name of a fearsome, fire-breathing dragon who speaks the King's English better than I.

"The Hobbit: The Desolation of Smaug" is as visually exciting as any film in recent years. Shot in Jackson's native New Zealand, the cinematography is spectacular, and the makeup, costumes and set designs are immediate front-runners for Oscars. Visual effects and makeup are done by the award-winning Weta Digital and Weta Workshop, respectively.

Martin Freeman again heads the cast as Bilbo, along with Richard Armitage as Thorin, and Ian McKellen as Gandalf the Grey. Bilbo is called the "burglar" by the dwarves --- his resourcefulness and courage save the day more than once for him and his adventuresome companions. Orlando Bloom returns from "LOTR" to reprise his role of Legolas, the handsome Wood-Elf with astounding bow-and-arrow skills.

Equal to Legolas' archer mastery is a newly created character for Jackson's second and third parts of the trilogy, that of the beautiful Tauriel (Evangeline Lilly). The nasty Orcs are no match for Tauriel's shafts, and the mutual attraction between her and the "taller" dwarf Kili (Aidan Turner) is a welcome sideline to the script. The dragon Smaug is voiced by Benedict Cumberbatch, who has become a household name in a short amount of time.

Last but not least, the actors playing the dwarves, back from Jackson's previous Tolkien adaptations, are simply marvelous and easy to take for granted. Their incredible makeup aside, these guys are accomplished actors, natural comedians, and totally adept at the physical requirements of their roles (although there are stand-ins for some of the older dwarves).

Jackson wastes no time getting the audience's attention in this film. Giant, voracious spiders turn the band of dwarves into cocoons, hanging upside down in the Milkwood forest, apparently doomed, save for Bilbo's knife and the fact that it is early in the movie. Later there is a terrifically filmed escape with the dwarves hiding in large barrels, cascading in rushing rapids like a fabulous amusement park ride that never seems to end. And of course, the desperate battle to survive against the ferocious Smaug in his cavernous abode sets up the third and final chapter, due out next December.

"The Hobbit: The Desolation of Smaug"  is a marvelous film that deserves Oscar consideration on many fronts, not just technical achievements. Seeing it in 3-D is a must, but seeing it on an IMAX screen is the ultimate cinema experience.