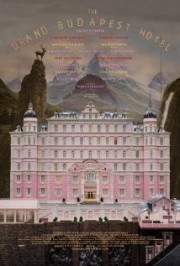 As a film critic, gushing over any one actor/director in particular is loathsome. But, in the case of Wes Anderson, I simply cannot help myself. Anderson, who has written and directed a few of my favorite movies, "Moonrise Kingdom", "Rushmore", "Royal Tenenbaums" and now the brilliantly quirky and terrifically humorous "The Grand Budapest Hotel", is certainly worthy of the accolades he receives.

Inspired by the wildly prolific Viennese author, Stefan Zweig, himself quite the dandy, and also the most translated writer in the world in the mid-1920's, Anderson and his friend Hugo Guinness concocted the story of Monsieur Gustave H (Ralph Fiennes), a renowned concierge at this posh European hotel in the made-up country of The Republic of Zubrowka. Gustave is a human marvel: elegant, polished, discreet, uber-mannered and all-knowing.

To keep the harshness of the ever-changing world of the 1930's at bay, Gustave hires a new lobby boy, Zero Moustafa (newcomer Tony Revolori), as a protege --- someone to carry on in his stead. Zero is thrilled to have the job and follows Gustave's instructions to the T, and without fail. They soon become inseparable.

Gustave is revered by the hotel's clientele for his ability to know what they want/need even before they do. His station at this lavish hotel affords him allowances with his wealthy patrons, sometimes sexual, especially with the dowagers, and one in particular, Madame Celine Villeneuve Desgoffe und Taxis, a.k.a. Madame D. (Tilda Swinton).

When the 84-year-old widow expires suddenly at her estate, Gustave, with Zero in tow, is summoned by her attorney, Deputy Vilmos Kovacs (Jeff Goldblum). Her darkly sinister son, Dmitri (Adrien Brody) is not happy with Gustave's unexpected appearance, and immediately instructs his deadly henchman, Jopling (Willem Dafoe) to keep an eye on Gustave. But when it's been determined that Madame D. was, in fact, murdered, things get dicey for Gustave and Zero.

Plots and subplots abound in this fast-paced romp around the aging hotel and parts of Eastern Europe. Set against wonderfully amusing fake backdrops, it brings to mind the screwball comedies of Billy Wilder and others from that era. The experience that Anderson has given us is madcap and exhilarating --- I absolutely loved every minute of "The Grand Budapest Hotel".

But, of course, it isn't just Anderson's writing and direction which is superb. He is constantly aware of every frame in his films --- and the need for just the right actor to play each role. He wrote the part of Gustave specifically for Fiennes, who is a wonder. His comic timing is spot-on and delightful, and his range as an actor is unmatched. There are simply too many memorable scenes to recount, though I was over the moon when Gustave informs Madame D., before she leaves the hotel for the last time, that her nail polish color is unsuitable. Upon finding the deceased in her coffin, his first comment is that at least she listened to him and changed her nails. Slyly hysterical ---

Fiennes, however, is just one in a marvelous ensemble. From F. Murray Abraham, who plays the elder Zero, to Saoirse Ronan, who plays Zero's love interest and pastry maker, Agatha, no one in this group of actors is forgettable.

Many in the film have worked with Anderson before, such as Edward Norton who plays Albert Henckels, the Captain of the Lutz Military Police with aplomb, and the ever-popular Bill Murray, who is an Anderson alum many times over. Brody, Swinton, Goldblum, and Jason Schwartzman and Owen Wilson, who both have small roles, have all worked in other Anderson movies. These actors love working with him --- and it definitely comes through in their performances.

Production designer Adam Stockhausen, another favorite of Anderson's, and most recently designer of "12 Years A Slave", utilized a department store in the town of Gorlitz, Germany as the filming location for "The Grand Budapest Hotel". Local bakers supplied the fabulous Courtesans au chocolat wrapped in the lovely Mendl's boxes, and composer Alexandre Desplat provided the charming score.

I seriously could go on and on about "The Grand Budapest Hotel", but I shan't. It's difficult to imagine how Anderson will top this, but to be sure, he has something already in mind.

Pick an adjective, any adjective --- droll, rollicking, wacky, whimsical, eccentric, absurd and even ludicrous --- to describe director Wes Anderson's latest film, "The Grand Budapest Hotel". Set between the world wars in the fictional country of Zubrowka in Eastern Europe, this movie is also very funny --- hysterical in parts --- featuring a huge, seasoned cast. The late Robert Altman would have loved this film, which practically demands a second viewing.

The script calls for rapid-fire verbal exchanges, and the cast, led by the normally austere Ralph Fiennes, is up to the task. Fiennes is Gustave H, the concierge at a posh, 1930's hotel in the Alps, The Grand Budapest. His apprentice is a young man named Zero Moustafa (played by 17-year-old Tony Revolori in his feature film debut), who would ultimately become the hotel's owner, played by F. Murray Abraham as the older Zero, who also narrates.

Who knew that Fiennes could be so funny? Anderson, for one. He wrote the part of  Gustave with Fiennes in mind. The rest of the all-star cast includes many actors who have worked with Anderson before on films like "Rushmore", "The Fantastic Mr. Fox" and "Moonrise Kingdom". Bill Murray has been in all of Anderson's movies, except for the director's feature debut, "Bottle Rocket", which starred Owen Wilson, himself a part of six Anderson movies, including this one. Edward Norton, Jeff Goldblum, Adrien Brody, Harvey Keitel, Jason Schwartzman and Willem Dafoe have all collaborated with Anderson before, all eager to do another film with him.

If those aren't enough name actors for you, how about Jude Law, Tom Wilkinson, Tilda Swinton, Saoirse Ronan and Bob Balaban, who are also part of the ensemble? Swinton has a small, but pivotal, role as Madame D., an 84-year-old dowager whose death sets off a madcap adventure to see who will inherit her estate. She is unrecognizable under five hours of make-up. Dafoe almost steals the show as the thug henchman Jopling who works for Madame D.'s son Dmitri (Brody).

"The Grand Budapest Hotel" features sight gags galore, chase scenes, and most of all, a captivatingly entertaining performance by Fiennes. Typical of his on-screen persona, he sends young Zero off to buy a candle, then a pastry, and, if there is any money left over, he is to give it to the crippled shoe shine boy--- quick cut to the shoe shine boy. It's all from the fertile mind of Wes Anderson, who based his story on the writing of an Austrian named Stefan Zweig, a prolific scribe in the 1920's, who committed suicide in 1942.

The movie is richly detailed --- Anderson would go great lengths to improve every frame. The great Alexandre Desplat provides the original music. Rather than employ conventional musical instruments, Desplat turned to unusual ones like the balalaika, even flying in a 50-piece balalaika orchestra from Moscow to complete the score.

"The Grand Budapest Hotel" is grand in its scope, and the most satisfying of Anderson's movies. But don't blink --- you might miss something extraordinary.