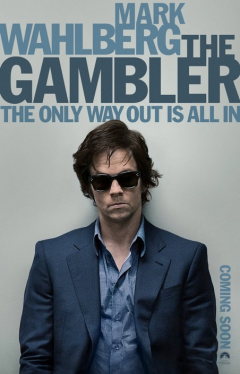 Remakes are pitiful. Are there no original ideas left in Hollywood? I never saw the original made in 1974 starring James Caan, but after seeing this version, it's difficult to fathom why anyone would want to redo this nonsense initially penned by James Toback.

Mark Wahlberg stars as Jim Bennett, an English literature professor, born into wealth and an adversarial relationship with his mother, Roberta (Jessica Lange). Daddy is not around --- we're not exactly sure what happened to him. But, no matter, Mommie dearest is available to bail poor Jim out of his insurmountable gambling debts --- but of course, "this is the last time!"

Haven't heard that line before --- and therein lies the problem. This atrocious script by William Monahan is completely ludicrous and unbelievable. We never find out exactly how long Bennett has been gambling, but he's in for a whole lot of dough --- and the bad guys just keep giving him more.

Realistically, there are very few consequences. Sure, he gets smacked

around --- a little --- and his student/girlfriend, Amy Phillips' (Brie Larson) life is threatened, as well as his mother's, but Bennett doesn't seem too concerned. When another loan shark, Frank (John Goodman), tries to reason with him, then also promises a dire outcome if not paid, this, too, is met by blithe indifference from Bennett.

We get the feeling as this unfolds that Wahlberg obviously finished reading the script and knows nothing bad is going to happen to Bennett, so he's simply going through the motions. It's a shame because I happen to really like Wahlberg, but this portrayal stinks. He looks and acts about as much like an English professor as David would an astrophysicist.

I loathe his classroom banter and attitude. It is phony and overplayed. In fact, just about everyone overacts in this film, especially Lange and Goodman. Monahan's dialogue is nonsensical and absurd. In each situation, whether it's between Bennett and Roberta, or Frank or Amy, none of it rings true, especially his scenes with Amy. And don't even get me started on the laughable ending.

The only bright spot in "The Gambler" is the break-out performance by Anthony Kelley, who plays the star basketball player at the university where Bennett teaches. His are the only scenes which hint at some semblance of truth and possibility. Too little, too late, however, in a film marred by an outlandish screenplay.

Don't go into "The Gambler" expecting a movie about gambling --- you'll be disappointed. It's an unconventional story about a man who does gamble, but only as a means to satisfy his own ends. Despite staggering debt, it's not about Jim Bennett (Mark Wahlberg) winning enough money to pay off that debt, it's about proving to himself he's brilliant at accomplishing it.

Bennett is a fast-talking assistant professor of English lit at an unnamed college. He's on a power trip, yammering about not doing something or being someone if you can't be exceptional. To prove his point, he picks on a young tennis ace taking his course, who is ranked second in the world. Why isn't this young man on the courts making millions instead of sitting in Bennett's classroom? (Picture a large auditorium with stadium seating). He then turns to a young female in the room, Amy Phillips (Brie Larson), proclaiming her to be the best writer in the hall, although she acts surprised, and a bit embarrassed, at his statement.

Amy and Bennett eventually have an affair, but we never really buy into his relationship with this student. In fact, we never buy into his modus operandi of betting huge sums of money --- hundreds of  thousands --- on one hand of blackjack or a single spin of the roulette wheel.

We learn he comes from money --- his mother, Roberta (Jessica Lange) is a wealthy widow who bails him out on at least one occasion. But when Bennett borrows from unsavory characters played by a disturbingly obese John Goodman, and Michael Kenneth Williams, of "Boardwalk Empire" fame, he risks the threat of physical harm to himself, Amy and his mother.

"The Gambler" is a bit too slick for its own good, the writing a bit too clever. That's disappointing, since William Monahan wrote the screenplay. He won an Oscar in 2006 for Best (Adapted) Screenplay for "The Departed", the great gangster film named Best Picture that year, starring Leonardo DiCaprio, Matt Damon, Jack Nicholson and yes, Mark Wahlberg.

The script is also more than a bit unrealistic. In one scene, with a stack of $1000 chips in front of him, Bennett actually draws a card to his natural 18 --- no blackjack player in his right mind would do that. Of course, he hits a three to win the hand. But normally you stand pat and take your chances that 18 is good enough to beat the dealer.

Also, I found the movie annoyingly insulting to the audience's intelligence by having the blackjack dealer announce, on a couple of occasions,  "the player wins". Even if you don't understand the idiosyncrasies of "21", most people know if you beat the dealer's hand, closest to 21, you win. I have never heard a dealer in any casino, live or in a film, proclaim "the player wins".

Perhaps if Bennett's personal life wasn't so contrived, and his betting excesses weren't like something out of a fantasy novel, "The Gambler" might have rung true. But even Wahlberg's character proclaims he's not a gambler. He's only looking for a home and a true love.

In a failed effort to build suspense, the script calls for Jim Bennett to stake everything on one last bet. The final roll of the little white ball on the roulette wheel could have gone either way. But be it black or red, we don't really care about the outcome.