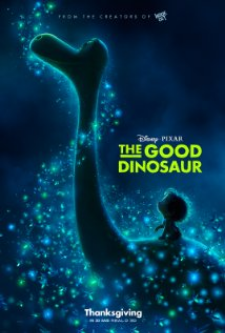 The Pixar team has done it again --- produced a beautiful film with a strong moral, lots of laughs and gorgeous animation. "The Good Dinosaur" is a movie the entire family can enjoy.

Arlo (voiced by Raymond Ochoa) is the youngest in a family of Apatosauruses roaming the Earth millions of years ago. The asteroid that changed the landscape of our planet by annihilating the dinosaurs misses Earth in "The Good Dinosaur", thus this mother, father and their three young offspring cultivate their farm and live peacefully.

The smallest of the three siblings, Arlo lives in constant fear and trepidation. While his brother and sister make their mark on the family silo, Arlo cannot find his way in the world. An unfortunate adventure forces Arlo to come to terms with his fears, as he navigates his way back home with the aid of a human boy he names Spot (voiced by Jack Bright), who becomes his most trusted friend.

First-time director and 15-year Pixar veteran Peter Sohn has taken the traditional story of a boy and his dog and turned it around into a dinosaur and his boy. David and I were amazed because Spot is so adorable, and he reminds us so much of our precocious great nephew, who prefers to run around clad only in his diaper. But I digress ---

The story of these two unlikely companions is charming and endearing. Arlo is terrified of everything, and Spot is afraid of nothing. He is so tenacious and clever that you immediately fall in love with him. He forces Arlo out of his shell, and teaches him to fend for himself. And when Spot is in real danger, Arlo steps up his game and comes to his rescue.

Sam Elliott, who's been getting a lot of work lately in "I'll See You in My Dreams" and "Grandma", is excellent as Butch, a T-Rex father who teaches Arlo a few values. He and his two teen T-Rexes, Nash (voiced by A.J. Buckley) and Ramsey (voiced by Anna Paquin) are driving a herd and enlist Arlo and Spot's assistance. Arlo must help them first before they guide him closer to home --- another important lesson he must learn.

"The Good Dinosaur" is full of breathtaking vistas and amazing animation. When Arlo is knocked unconscious and awakens to the sun glistening on the water, it is dazzling. That and the wind blowing the tall grass in the meadows, and the fireflies lighting the sky when Arlo and his Poppa venture into the night --- all of this grandeur makes "The Good Dinosaur" a celebration of life, beauty and real friendship.

In a year replete with Oscar-worthy animated features, Pixar has managed to triumph over all of them. "The Good Dinosaur" is a true gem --- loveable characters, a good script for children and adults, and detailed animation that ranks among the best ever achieved on film. The sight of a tsunami-like wall of water coming towards the screen is as magnificent as it may be frightful for younger moviegoers. And the title Apatosaurus (Arlo), voiced by 14-year-old Raymond Ochoa, perched precariously on the side of a mountain will give acrophobes plenty of reason to look away. All this and much more --- in exceptional 3-D.

Because everyone else in Arlo's family has earned their "mark" by doing something extraordinary, like creating a farm and growing their own corn, Arlo is desperate to join them. We're talking about their mud-covered dinosaur footprints permanently etched on the side of the food silo built by Arlo's Poppa (Jeffrey Wright).

As the runt of the litter, Arlo is separated from his family --- Momma (Frances McDormand), and sibs Buck and Libby. He gets lots of chances to prove his mettle. Arlo runs into three T-Rexes on his journey, the most fearsome voiced by Sam Elliott. Casting this deep voiced veteran as Butch is a real coup --- he's perfect.

The most endearing moments of "The Good Dinosaur" center on the precious relationship between Arlo and Spot, an orphaned cave boy who only grunts, scampers around on all fours like a dog, and causes all kinds of mischief. Spot is initially a thorn in Arlo's side because he was stealing from the family food supply, but they become unlikely companions before long.

Peter Sohn, a voice actor in previous Pixar efforts "Monster University" and "Ratatouille", has stepped way up as he writes and directs "The Good Dinosaur", his debut feature. Sohn's writing is charming, and laced with humor and pathos. One little boy at our screening told his mother that the ending made him cry.