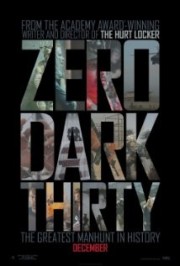 I am amending my review to include my outrage at Kathryn Bigelow's exclusion from the Best Director Oscar nominations. This is a complete travesty, one of the most egregious in recent Oscar history. Why was she not nominated? Because she is a woman and she's already won once for "The Hurt Locker" (2009)? Men can win more than once! I'm also upset that Ben Affleck wasn't nominated, but that's another review.

"Zero Dark Thirty", the title referring to the dark of night and the moment, 12:30 a.m., when the Navy SEALs first stepped onto Osama bin Laden's compound, is one of the most masterful espionage films ever conceived. With a brilliant original screenplay by Mark Boal, who also wrote "The Hurt Locker", and an outstanding ensemble cast led by Jessica Chastain, Bigelow has crafted a film which will keep audiences enrapt for ages to come.

Maya (Chastain), a very young CIA officer and terrorist targeter, is immediately thrust into action upon landing in Pakistan. She is mentored by Dan (Jason Clarke), another CIA operative who is adept at getting information out of captured terrorists. Also in their tight-knit group is Jessica (Jennifer Ehle), a married CIA analyst with more seniority than Maya, and a lot more patience. Rounding out the group is Larry (Edgar Ramirez), a CIA ground branch operative and surveillance specialist. With Maya leading the way, they become obsessed with finding bin Laden.

Maya is actually based on a real person, whose name, of course, cannot be revealed by Boal or Bigelow. Following the raid on May 1, 2011, Boal spent several months in Washington, D.C., then traveled to Pakistan to follow leads. There is an incredible amount of research and background, which is what makes "Zero Dark Thirty" so compelling.

Chastain could be a lock for Best Actress, her performance is that astounding. She goes from a naive recruit to a bold force to be reckoned with when things don't go her way. Watching Chastain scream at her Langley boss, George (Mark Strong) and hurl expletives at James Gandolfini, who plays the CIA director, is so rewarding. And, just in case you might be worried that the film is overwhelming, there is enough humor to keep it from becoming morose.

But what really sets this movie apart is the actual raid on bin Laden's compound by the Navy SEAL Team Six. Even though we know that all goes well, the tension is so gripping and the suspense so heart-pounding, it's almost unbearable. Plus the fact that the production crew led by Jeremy Hindle recreated the compound, based on blueprints and actual reporting, brick by brick, the authenticity is shocking.

Several other components are necessary for such an important film. Editing is tantamount to the finished copy, and Bigelow, along with editors Dylan Tichenor and William Goldberg, had to cut down to a manageable size over two million feet of digital footage. A monumental task, but one worthy of one of those gold statuettes. And lastly, the score by Alexandre Desplat, who has provided marvelous music for many, many films, is so perfect, it enhances our viewing pleasure immensely.

And once you have seen this tremendous effort on behalf of Kathryn Bigelow, you will see how she got screwed!

His View:  In her review of "Argo", Jeanne remarked that director Ben Affleck had managed to glue our attention to the screen even though we already knew the outcome. Academy Award winning director Kathryn Bigelow ("The Hurt Locker") had the same daunting task in her latest Oscar-nominated film, "Zero Dark Thirty", where the audience is placed smack in the middle of the raid that killed Osama Bin Laden. And Bigelow pulls it off with stunning results.

A riveting performance from Jessica Chastain as CIA operative Maya is the centerpiece of this taut, exciting look at the Barack Obama-sanctioned mission assigned to the Navy Seals, whose courage and resolve eliminated the head of Al Qaeda in 2011. Chastain was just nominated for Best Actress honors, and despite some heavy competition, she deserves to be the winner. Chastain's emotional portrayal of Maya's utter relief, when the mission is over, won me over completely.

"Zero Dark Thirty" wastes no time getting into the meat of our government's anti-terrorist activity, as a no-nonsense U.S. interrogator named Dan (Jason Clarke) is putting an Al Qaeda prisoner through detention hell, including disturbing scenes of water boarding. This goes on for some time, and despite Maya's unease with the methodology, she is doggedly determined to locate Bin Laden at any cost.

The movie is essentially broken down into two parts, each as fascinating as the other. First, to determine Bin Laden's location with high certainty, a phenomenal amount of intelligentsia had to be accumulated, massaged and analyzed. Then it was up to the field operatives to test the data and identify the appropriate players, most notably a mysterious and trusted emissary of Bin Laden whom, it was believed, had total access to the mammoth compound where it was thought that Bin Laden was residing.

The second part of the film, of course, deals with the actual assault on the compound, but not before politicos at all levels of the U.S. government attempt to assess the percentage of assuredness that Bin Laden is actually there. Maya is 100% convinced that they have pinpointed his whereabouts in the Pakistani property in the town of Abbottabad, but nobody else is close to that amount of certainty.

The political stakes are huge. If he is not there, and if innocent civilians are killed during the raid, the U.S. and the President might suffer irrevocable repercussions. On the other hand, if Bin Laden is truly there, and the U. S. takes no action whatsoever, the political fallout of missing the chance to capture or kill America's greatest enemy, perhaps of all time, could be even worse.

Bigelow's direction is superb, building the suspense to heart-pounding levels, enhanced by original music from the great Alexandre Desplat. The complex screenplay is by Mark Boal, who won the Oscar in original writing for "The Hurt Locker", and who has just been nominated in the same category for "Zero Dark Thirty".

In a strong field of Best Picture nominees, "Zero Dark Thirty" has a decent chance to emerge the winner. It will be interesting, to say the least.