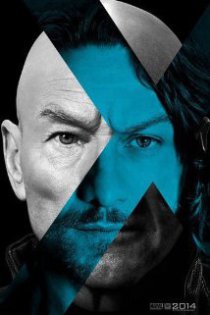 How do you screw up a movie starring James McAvoy, Hugh Jackman, Michael Fassbender, Nicholas Hoult and Peter Dinklage, to name a few? I'll give you a hint --- the script! It's all about the writing, and the screenplay for "X-Men: Days of Future Past" is laborious and less-than-thrilling.

Story credit goes to Jane Goldman, Matthew Vaughn and Simon Kinberg, who also wrote the screenplay. Kinberg was also attached to "X-Men: The Last Stand", another disappointing offering of the franchise. He's a very busy man these days --- working on a myriad of projects including "Star Wars" films for Disney. I certainly hope he writes those better than this.

Unfortunately, Mr. Kinberg takes a somewhat interesting premise --- sending Wolverine (Jackman) back in time to change history to save mankind and the

mutants --- and manages to destroy any ounce of tension and/or excitement.

While we understand that Wolverine has his work cut out for him due to the fact that early in their lives Charles Xavier (McAvoy) and Eric Lehnsherr (Fassbender) despise each other, now Wolverine must unite them in a common cause. None of this mitigates the total blandness of the execution. Yes, stadiums are moved, along with a multitude of other heavy items, but it all seems too cartoonish in its effects. Even the bunker hiding Richard Nixon, President of the U.S. in 1973, when this segment of the film takes place, is ridiculously amateurish in its depiction.

The main cast has returned: Patrick Stewart as Professor X, Ian McKellen as Magneto, Jennifer Lawrence as Raven/Mystique, Halle Berry as Storm, Ellen Page as Kitty Pryde and Anna Pacquin as Rogue. Also on hand from "X-Men: First Class" (2011) is Hoult as Hank/Beast, plus McAvoy and Fassbender. The newcomer is Dinklage as Dr. Bolivar Trask.

The performances are all quite acceptable, except for Lawrence, who basically phoned in her portrayal of Mystique. Perhaps she's tiring of these fantasy characters, and would prefer to concentrate on other roles. But whatever her reasons, she misses the mark here badly.

Dinklage, now wildly popular because of "Game of Thrones", has always been a huge, huge favorite of mine. But, much to my dismay, he is given precious little to do as Dr. Trask  --- a real shame, because I believe he has a true penchant for playing an evil person. C'est dommage.

Alas, there isn't much to write about "X-Men: Days of Future Past" --- good, that is. It's a tiresome slog through material which should have been and could have been so much better.

Opinion: Mild Wait For DVD (DO NOT waste your money on 3-D)

We've seen the special effect in a movie before, where one person controls the movements of many --- "The Matrix" with Keanu Reeves comes to mind. He motioned with his hand and a host of attackers fell to the ground, helpless and immobile. This is one of the powers attributed to one of the super heroes in this latest installment of the X-Men franchise. But it is no longer a novel idea.

Such is the main problem with these frequent "X-Men" sequels --- the novelty has worn off. The result is a tedious movie-going experience. In "X-Men: Days of Future Past", even the premise is stale. Wolverine (Hugh Jackman) is sent back into the past, with the help of Kitty Pryde (Ellen Page) to confront two of his current allies who were enemies back in 1973. He meets up with younger versions of Professor Charles Xavier (James McAvoy) and Magneto (Michael Fassbender).

His mission is to thwart a robot inventor, the evil Dr. Bolivar Trask (Peter Dinklage), who has usurped the DNA of Raven/Mystique (Jennifer Lawrence) so that his creations, called Sentinels, can assume any form, human or otherwise. This is a serious threat to the human race, so it's a big deal. Wolverine has help, of course, from the likes of Beast (Nicholas Hoult) and others.

There are some humorous references to the era, notably when someone points out the only three existing television channels at the time. That, in itself, seems prehistoric considering the plethora of channel availability with today's modern technology.

But the movie takes itself far too seriously. Other than Wolverine's occasional wisecracks, there is no comic relief --- unless you count Lawrence's facial expressions, or lack thereof, whenever she morphs into her Mystique persona. Perhaps the most fascinating aspect of the film is the uncanny resemblance of actor Mark Camacho to Richard Nixon, at least when we see his profile.

"X-Men: Days of Future Past" is not a badly made film, but I think its greatest appeal will certainly be to devotees of the genre.