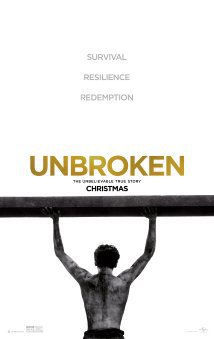 "Unbroken" is an incredibly amazing story. As I tell everyone, if it weren't true, you wouldn't believe it --- and I sincerely mean this. Louis "Louie" Zamperini was a high school runner, who actually competed in the 1936 Olympics hosted by Adolph Hitler in Nazi Germany.

He then went on to the University of Southern California (USC), but after the war began, he enlisted in the Army Air Corps. As a bombardier, he flew missions over the South Pacific and in 1943, his aircraft --- a defective B-24 Liberator, nicknamed the Green Hornet --- was shot down, landing in the Pacific Ocean, killing eight of the 11 crew members on board.

After surviving in a raft for 47 days, he was then captured by the Japanese, and spent the next two years in various prisoner-of-war camps. Seriously --- anyone would find this extremely difficult to fathom, but Louie lived it all --- and survived to age 97, passing away this past July 2, 2014.

Director Angelina Jolie auditioned hundreds of young men to play Louie. She finally settled on a relatively unknown Irish actor named Jack O'Connell ("Starred Up" --- a small film which was shown at the Chicago Critics Film Festival last May). Jolie felt O'Connell embodied Louie's spirit and drive, and I have to agree.

His performance is brave and unfettered. It's very difficult to play a figure who's bigger than life --- and who has conquered so much adversity. But O'Connell is definitely up to the task, and gives his all in this staggering role.

Based on the outstanding best seller by Laura Hillenbrand ("Seabiscuit: An American Legend"), making "Unbroken" into a film is a feat not many people wanted to undertake. The book is incredible --- so moving and comprehensive, difficult to read at times,  because what Louie had to endure is mind-boggling.

And I believe this is part of the problem with Jolie's film. She does an admirable job --- I can't even imagine tackling this subject because there is so much to impart about this war hero's life. And to completely tell the story, the movie would have needed to be about seven hours long.

Thus Jolie concentrates on the first part of Louie's life experiences, without exploring this trials and tribulations after the war. But because this is still a great deal of ground to cover, things get lost. And if she had made this film to showcase even half of what he had to live through day in and out, constantly harassed by Cpl. Mutsuhiro Watanabe (Miyavi), known as "The Bird", no one would want to see the movie.

This prison camp commandant was a wealthy young man from a socially prominent family, who despised his war post and took his frustrations out upon Louie. At one point, The Bird is transferred to another camp, but then so is Louie. Without realizing it, Louie has once again landed under the control of The Bird, which causes him to nearly faint at the sight of him.

Jolie has assembled an amazing cast and crew. Many who worked with her on "Unbroken", like cinematographer Roger Deakins, editors Tim Squyres and William Goldenberg, composer Alexandre Desplats and screenwriters Joel and Ethan Coen, Richard LaGravenese and William Nicholson are Academy Award- nominated or actual Oscar winners.

"Unbroken" is a stirring film --- well worth viewing on the big screen. Louie's account of hope, the will to live and redemption has been an inspiration to millions --- and Jolie has preserved his tale for us beautifully.

With these words, Louis "Louie" Zamperini's older brother, Pete, convinced him he could become a high school track star. What Pete didn't know, at the time, is that Louie would heed that advice years later to get him through the rigors of World War II, including a brutal two year ordeal in Japanese internment camps. As the "favorite" POW target of a viciously sadistic Japanese officer, Louie was subject to beatings, humiliation and degradation that would be his ultimate survival test. Incredibly, he never fought back.

"Unbroken" is the true story brought to the screen by director Angelina Jolie, based on the best selling book by Laura Hillenbrand ("Seabiscuit: An American Legend "). Jolie was so taken with Zamperini's life that she felt compelled to expose it to a larger audience by making a feature-length film.

In addition to hiring relative unknown Jack O'Connell as Louie, Jolie has populated her movie with virtually an entire cast made up of unfamiliar names and faces. I regard this as a plus because it lends a greater tone of authenticity to "Unbroken", as opposed to a film like "Lincoln" which I found distracting because it featured so many Hollywood veterans.

On the other hand, there is precious little character development in this movie. We barely get to know Zamperini's fellow POWs, or his flyboy pals in the exciting opening sequences featuring ultra-realistic dogfights with the Japanese long-range fighter planes known as Zeros. Even when Zamperini and two others are shot down, marooned at sea in a life raft in shark-infested waters for 47 days, we don't really know who these guys are. Nevertheless, "Unbroken" should be seen on the big screen if only to witness this jousting in the sky, orchestrated by 11-time Oscar nominee for cinematography, Roger Deakins.

I thought Jolie spent an appropriate amount of time in the movie to showcase their "lost-at-sea" ordeal. By the time the near-dead survivors are found by the Japanese, an internment camp almost seems welcome. That is, until we meet the camp's commanding officer, Cpl. Mutsuhiro Watanabe (Takamasa Ishihara), who speaks flawless English and wields a nasty night stick.

The brutality Watanabe lays on the defenseless Zamperini is not nearly as difficult to watch as it is in some other war pictures. But the fact that "Unbroken" is based on Louie's real-life experiences makes the punishment that much more repulsive. The fact that none of the captive POWs tried to resist is testament to the reality of their situation. They either fight back and risk almost certain death, or summon previously untapped sources of endurance, and survive while maintaining hope the U.S. and its allies will prevail.

After the rescue of Zamperini from the life raft, most of the film takes place in two different POW camps, each depicting man's inhumanity to man during wartime. The abusive treatment of military detainees, like that inflicted upon Zamperini, eventually led to the Geneva Convention's post WWII changes to the immorality and illegality of undue process of POWs.

What happened to Zamperini, who died six months ago at age 97, occurred almost 70 years ago. But Louie's inspiration lives on today in Jolie's film, and difficult as it may be to accept for those who might seek revenge, he embodied the virtue of total forgiveness.