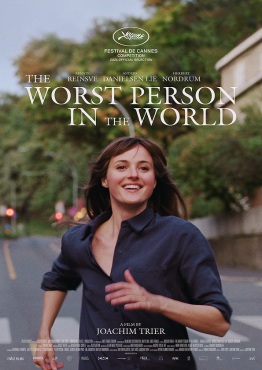 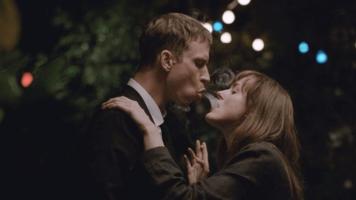 Jeanne: THE WORST PERSON IN THE WORLD is probably not the best title for a film billed as a romantic comedy/drama, but THE WORST PERSON IN THE WORLD is definitely not your ordinary romantic comedy/drama. Director Joachim Trier and his writing partner Eskil Vogt wanted to explore the topics of love, sex, career paths, relationships, motherhood, etc. by developing over a four-year period their protagonist, Julie (Renate Reinsve), a single woman.

By utilizing the format of a book, Trier and Vogt have broken down their story into 12 chapters with a prologue and an epilogue. Their script is inventive with dialogue that is both believable and very funny at times. Julie is in her late twenties when we first meet her studying medicine. She goes from one career choice to another like someone tasting different wines --- she can’t decide which or what she likes best.

She meets Aksel (Anders Danielson Lie), who is already in his forties and an established writer. His friends are married with children, something Aksel wants for himself --- with Julie. But a weekend at a country house with those friends and their screaming broods convinces Julie otherwise.

Walking home from a book party in Aksel’s honor, Julie nonchalantly crashes a wedding. There she espies Eivind (Herbert Nordrum), and the two spend the night talking and not having sex because they’re both in committed relationships and they don’t want to cheat. But there are sparks --- of course. A chance visit with his girlfriend to the bookstore where Julie works pushes the two of them to meet again.

In one of the best scenes ever in a movie, as Julie is travailing through Oslo to meet up with Eivind, everyone and everything around her freezes. She passes people halted mid-stride, cars stopped in the street --- it’s a totally cool and amazing dreamlike sequence. Definitely worth seeing the film just for this.

But really THE WORST PERSON IN THE WORLD should be watched for the fantastic cast, especially Reinsve, who won the Best Actress award at the Cannes Film Festival for this performance. She’s vivacious and inquisitive, imbuing her character with the realism of a woman making this journey of self- realization. And her chemistry with both Lie and Nordrum is superb. She loves them both, but is either truly right for her?

And lastly the city of Oslo plays a major role in THE WORST PERSON IN THE WORLD. It’s stunningly beautiful, made even more so in the deft hands of cinematographer Kasper Tuxen. The Norwegian light is breathtaking and Tuxen knows how to exploit it to show Oslo off as a jewel. It’s the final component in Trier’s intriguing coming-of-age story for adults. 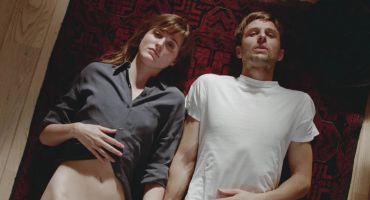 David: You could surmise from the title that THE WORST PERSON IN THE WORLD profiles any number of recent American political figures, but that is not the case. This is a film by acclaimed Norwegian director Joachim Trier --- he won Norway’s equivalent of the Oscars in 2007 for his film REPRISE, snagging Best Picture, Best Director and Best Script.

Trier co-wrote this screenplay along with his friend and frequent collaborator Eskil Vogt. The story is centered in Norway’s capitol city Oslo, and Trier was influenced by Martin Scorcese and Spike Lee for images they have used in the past of their beloved New York City. The leading lady is Renate Reinsve who plays Julie, a role for which she won the Best Actress award at Cannes. Accompanying her in this finely-acted film are  the two men playing her suitors, Anders Danielson Lie and Herbert Nordrum.

THE WORST PERSON IN THE WORLD is told in 12 chapters of varying lengths along with a prologue and an epilogue. Anyone who has ever been in a romantic and/or sexual relationship can relate to Julie’s experiences. One of the more memorable chapters is a dreamlike sequence where Julie dances through the streets of Oslo while everybody else is frozen in place. Trier did not resort to CGI for this creative effect but rather utilized real people as extras.

Julie is pretty, flirtatious and likeable and she ultimately settles down with Aksel (Lie) who is 14 years older than she. The movie touches on many issues we face in life either ourselves or through others, like children and whether to have them, terminal illness, career choices --- to name a few.

As you might expect from a Scandinavian film many scenes are sexual in nature with nudity and other graphic presentations --- all done tastefully. Plus, the film boasts a catchy soundtrack including world famous artists like Harry Nilsson, Christopher Cross, Art Garfunkel, Todd Rundgren and Billie Holiday.