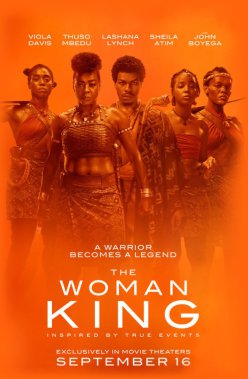 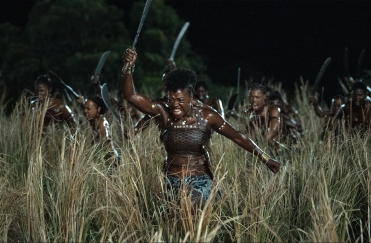 Jeanne: THE WOMAN KING is the incredible story based on true events of female warriors known as the Agojie led by General Nanisca (Viola Davis) in 1823. These powerful and exceptionally trained women --- along with their male counterparts --- protected the African Kingdom of Dahomey ruled by King Ghezo (John Boyega).

But make no mistake, the Agojie, who existed from the 1600s to the late 1800s, were the most feared warriors in West Africa, and depended on no one. They fought with unmatched ferocity and dedication, treated and revered the same as their male comrades. It was a society which placed women and men on equal footing in all aspects: politics, religion and fighting.

Nanisca is not only the general leading these women, she’s also responsible for their training. Young women end  up at the palace for various reasons and many remain to learn the ways of the Agojie warriors.

One such teenager, Nawi (Thuso Mbedu), an orphan whose adopted father keeps trying to marry her off, is banished to the king, and takes her place in a field of new recruits. The last known Agojie warrior who died in 1979 was named Nawi, so Mbedu’s character is a tribute to her.

She and others like Ode (Adrienne Warren) and Fumbe (Masali Baduza) fall under the tutelage of Izogie (Lashana Lynch), an Agojie lieutenant tasked with getting these girls in shape to fight. Nawi and Izogie form a tight bond as Nawi persists in her efforts to be the best.

Nanisca’s right-hand in the army is Amenza (Sheila Atim), who also happens to be the female religious leader in Ghezo’s kingdom. She and Nanisca are confidantes, with Amenza guarding Nanisca’s dark secret.

The region is in turmoil due to the slave trading business. Ghezo, a true historical figure, had been participating, garnering himself great wealth. Nanisca is vehemently opposed to this horrific practice, pointing out to Ghezo that a fortune can be made in exporting palm oil instead of humans.

Dahomey’s rival kingdom, the Oyo Empire, has a vicious general, Oba (Jimmy Odukoya), who hates women, particularly Nanisca and her Agojie warriors. He’s also responsible for kidnapping many in the region to sell to enslavers such as Santo Ferreira (Hero Fiennes Tiffin), a young Brazilian on his maiden voyage running slaves. His friend, Malik Diallo (Jordan Bolger), is the son of a slave and a slave trader, who wants no part of Santo’s business. What he wants is Nawi. 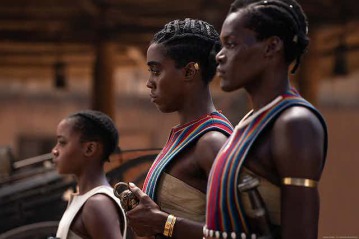 THE WOMAN KING is a magnificent film --- so utterly beautiful and powerful. The history of these majestic women was discovered by well-known actor, Maria Bello, who produces, when she was traveling in West Africa. She and Dana Stevens worked together on the story with Stevens completing the screenplay. The writing is phenomenal --- no wasted words or actions. A perfect script helmed by director Gina Prince-Bythewood.

But none of this would matter without the astonishing performance by Davis, which has Oscar nomination written all over it. She just doesn’t make a bad movie --- or anything. She commands every scene with an authority commensurate to that of a general, until she must offer up a more vulnerable side, which is equally enthralling. Ms. Davis simply can do no wrong.

She trained as hard if not harder than the rest of her army. The women were put through their paces six days a week, with weight training and specific nutrition --- it definitely shows. They are all in unbelievable shape. The battle sequences, along with several other well-choreographed scenes, are highly entertaining, with not as much gore as one might expect.

As you may have noticed reading this review, THE WOMAN KING’s cast and crew are dominated by women --- and rightly so. It’s an account of the mightiest female warriors, so it should be brought to the screen by women who excel in their professions. THE WOMAN KING is an amazing effort by all those involved.

David:  Viola Davis has added to her extensive film repertoire with an extraordinary portrayal as the leader of an all-female army dedicated to protecting their home in Dahomey, West Africa. Davis portrays General Nanisca, head of the Agojie, the fiercest group of women warriors the world has likely ever known. Yes, THE WOMAN KING is an amazing movie inspired by real events in the 19th century, specifically 1823, 199 years ago.

The kingdom of Dahomey (now known as the southern part of Benin) is threatened by the Oyo Empire (located in modern-day Nigeria), led by their own fierce General Oba (Jimmy Odukoya). They do not believe that women have any standing in society, much less comprise their own army, and Oba is, in fact, disgusted by the notion. He and Nanisca wage at least two jaw-dropping hand-to-hand battles during the film, each wielding the weapon of choice at the time, the machete.

The new leader of Dahomey, King Ghezo (John Boyega), faces the unenviable position of possibly abandoning his country’s lucrative slave trade for other economic pursuits. He also is seeking a worthy female counterpart to his throne, and Nanisca is a prime candidate. Boyega’s performance is supremely regal.

THE WOMAN KING is an excessively violent film, yet it avoids an “R” rating because the bloodletting is not seen, merely imagined. This doesn’t make the battle scenes --- thankfully kept short by director Gina Prince-Bythewood --- any less gut-wrenching. The implied beheadings of their enemies are suggested by the intense training the Agojie must endure before going into battle. The choreography of the training scenes and other sequences in the film are extraordinary in themselves.

In fact, the actors, prior to principal shooting, had to succumb to months of twice a day, six-days-a-week sessions of weightlifting and other muscle-building techniques. They also were faced with a strict diet regimen aimed to build up their bodies. The result is a believable group of powerful and deadly women fighters for which the white slave traders and even the Oyo Empire, were no match. 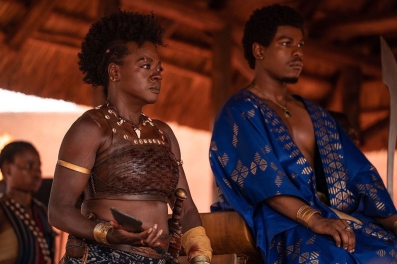 For all its savagery, THE WOMAN KING has an underlying storyline involving Nanisca and a young protégé of hers named Nawi (Thuso Mbedu). Their relationship is a complicated but compelling part of the script by veteran writer Dana Stevens. THE WOMAN KING is as poignant as it is violent.

Mbedu renders an amazing performance as Nawi. Shunning her father’s choice of arranged marriage partners, she wants only to be a member of the sisterhood that comprises the Agojie. To prove her mettle, she competes against other hopefuls in a brutal endurance contest that includes an agonizing crawl through razor-sharp thorny branches.

Other standouts in the Agojie army are Izogie (Lashana Lynch) and Amenza (Sheila Atim). Adding to the movie’s conflicts are the appearances of white enslaver Santo Ferreira (Hero Fiennes Tiffin, a nephew of Ralph Fiennes) and his friend, Malik Diallo (Jordan Bolger). Malik does not approve of slavery, while Santo is there to continue his family’s traditional role in the slave trade. And not insignificantly, Malik and Nawi form a bond that leaves us guessing as to its outcome.

The music by two-time Oscar nominee and six-time Grammy winner Terence Blanchard impressively augments the action. From the opening minutes of the film, Blanchard’s pulse-pounding drums build the anticipation early. And costume designer Gersha Phillips spares no details as the women warriors are garbed in attire that befits their rank, most notably the cowrie shells draped around their necks and arms.

THE WOMAN KING is as exciting as it gets. Its run time  of two hours and 14 minutes flies by. But it is Davis’ Oscar-worthy performance that makes this sensational story so compelling. When she lets out her “ya-ya-ya-ya-ya” battle cry --- it is chilling!