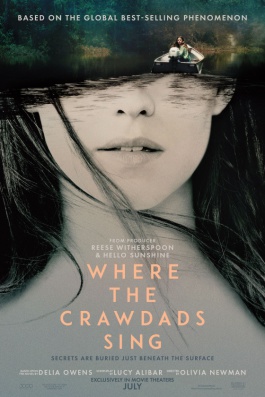 Movie: WHERE THE CRAWDADS SING

Jeanne: Movies should stand on their own. That being said, “Where the Crawdads Sing” was such a successful best seller by Delia Owens that its readers will likely flock to the theaters to compare it to their adored novel. Full disclosure, I did not read Owens’ story about Kya, the “marsh girl”, but if you’re looking for a good summer movie, this isn’t it.

Directed by Olivia Newman with a screenplay by Lucy Alibar, WHERE THE CRAWDADS SING is a muddled mess with more holes in the story than Swiss cheese. Daisy Edgar-Jones plays Kya Clark, a girl who was one-by-one abandoned in the marshes of North Carolina in the early 1950s, first by her mother, then her brothers and sisters and lastly her abusive father.

She learns to survive on her own out in their rundown shack on a piece of property purchased long ago by a distant great grandfather or so. Kya is clever though and digs for oysters to sell to Jumpin (Sterling Macer, Jr.) and his wife, Mabel (Michael Hyatt), who own a small store nearby.

A childhood acquaintance, Tate Walker (Taylor John Smith), starts hanging around, offering to teach Kya to read and write. They fall in love, but Tate has been accepted to college with a scholarship and leaves Kya behind.

Then it’s the local high school quarterback hunk, Chase Andrews (Harris Dickinson), who takes a shine to Kya. Only he’s not nearly as nice as he pretends to be, and Kya sees the foreshadowing of her parents’ dysfunctional relationship.

Kya breaks it off with Chase after learning he’s been engaged to another girl the entire time they’ve been together. But Chase will not leave Kya alone. After he attacks her out in the marshes, Kya flees to meet with her publisher in Greenville, N.C. and while she is gone, Chase is found dead.

Kya is immediately suspected, arrested and charged with Chase’s murder. Her only hope is a retired lawyer, Tom Milton (David Strathairn), who comes to her defense. As the trial begins, it seems as if everyone in town believes Kya is guilty. 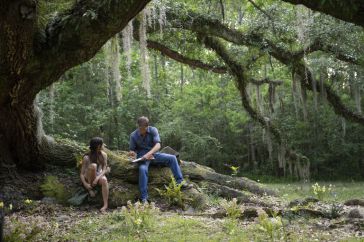 WHERE THE CRAWDADS SING isn’t a horrible film, it’s just not a very good one. How does this child survive on her own? And why does no one --- not one sister, brother or even her mother --- come back for her? Well, one brother does return after his service in the army, but by then Kya is grown and an established artist. How does she manage to continually evade the people from child services?

The audience is supposed to suspend belief and accept all of this as ordinary fact. But, if you’re a thinking person, it’s a bit difficult to do. And the final payoff at the end of WHERE THE CRAWDADS SING comes too late to make a difference --- and by then, who cares?

The other sticking point is what is it about Kya that entices these young men? Is it the fact that she lives all alone, that maybe her eyes do glow in the dark --- which they do not. Or is it because, as Chase laments, she has no parents to tell her what to do?

Edgar-Jones is good enough, but she doesn’t represent the kind of character boys would obsess over. She’s a rather utilitarian choice for the role. Smith and Dickinson are fine, and perhaps it’s the screenplay, but there are no real sparks between either of them with Edgar-Jones.

Hyatt, Macer, Jr. and Strathairn are the most interesting members of the cast, but with their acting chops, they could have been utilized in a more productive way.

The cinematography by Polly Morgan is breathtaking, along with the music by Mychael Danna. But it’s simply not enough to save this adaptation of a wildly popular novel. 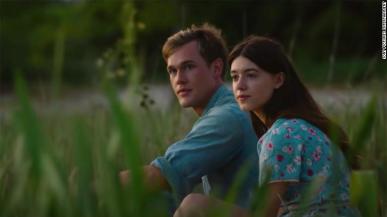 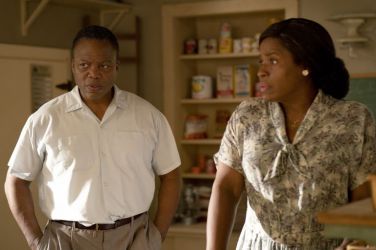 David:  Who killed small town quarterback Chase Andrews? That is the mystery behind WHERE THE CRAWDADS SING, a thriller based on the best-selling novel by Delia Owens.

The local high school athlete is found dead in a swamp in North Carolina. This is also where Kya Clark, a.k.a. the “marsh girl”, has lived alone in a remote cabin since her family abandoned her at an early age. Kya and Chase were romantically involved so, of course, she instantly becomes a suspect.

And in fact, Kya is arrested and put on trial for Chase’s murder. She is defended by Tom Milton (David Strathairn), a local attorney who firmly believes in her innocence. Despite some unanswered questions and even a few major holes in the plot, this is an engrossing film.

Daisy Edgar-Jones plays Kya. It’s a very good performance because she must exhibit trust with two main suitors when her abusive father and brothers inexplicably leave her alone. She also must learn about life on her own since her schooling lasts less than a day --- the bullying she endures on her first and only day is unbearable. Edgar-Jones is quite convincing as the target of ridicule, yet she manages to maintain more than a modicum of self-esteem.

Once Kya progresses into young womanhood, she finds love with Tate Walker (Taylor John Smith) a handsome acquaintance who teaches her how to read and write. When Tate goes off to college and disappears, Chase (Harris Dickinson) enters the picture and begins a relationship with Kya. 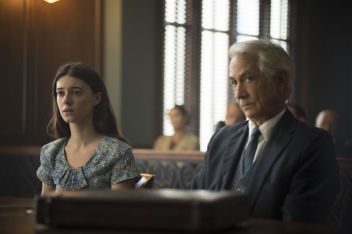 Besides Milton, Kya and Tate, there are a few other likeable characters depicted. The couple who run a local store in the marsh, Mabel and Jumpin (played by Michael Hyatt and Sterling Macer, Jr. respectively) are early supporters of Kya as a little girl and their unwavering love for her grows throughout the film. The fact that they are Black makes this trio all the more heartfelt.

Little Kya is played credibly by Jojo Regina doing her best Abigail Breslin impression. The heavy in the Clark family is the father, Jodie (Logan Macrae), who beats his pretty wife (Ahna O’Reilly), forcing her to leave home and her children. He is a nasty fellow with not a good bone in his body.

This is one movie where we eagerly await the verdict of the jury. Milton has crafted a convincing case for Kya’s innocence, and his closing argument appears to be flawless. Strathairn is the right choice for this role. His legal persuasions and general empathy for Kya ring true.  But how long will the jury stay out and how will they rule?

Because the film jumps back and forth between the trial and everything in Kya’s life that precedes the court scenes, tremendous credit must go to Alan Edward Bell for a stupendous job of editing. Oscar winner Mychael Danna provides the excellent score.

For fans of Owens’ book touted as a “global phenomenon”, the movie version --- we have this from a reliable source since neither Jeanne nor I read it --- is true to the novel. Screenwriter Lucy Alibar gets the plaudits here. WHERE THE CRAWDADS SING is directed by Olivia Newman and lists Reese Witherspoon as one of its executive producers.

There is a major reveal at the end of the film which will have moviegoers buzzing as they exit the theater. This tidbit of information will have the viewer questioning everything that went before. WHERE THE CRAWDADS SING is difficult to forget. 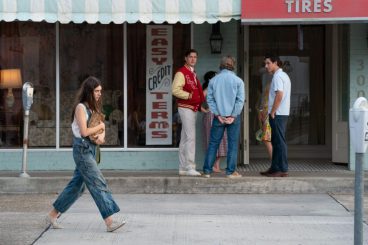 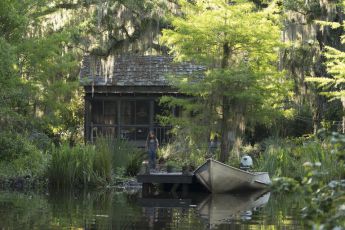