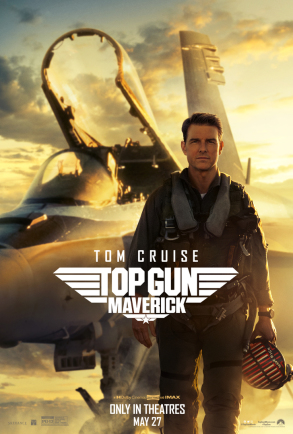 Jeanne: Yes, Pete “Maverick” Mitchell (Tom Cruise) is back --- in a very big, very exciting way. It’s been 36 years since we last saw Lieutenant Mitchell in May of 1986. Now in TOP GUN: MAVERICK, Pete is a captain in the Navy, but still a test pilot, eschewing career advancement so he can continue to fly.

He's been summoned by the commander of the U.S. Pacific Fleet, Admiral Tom “Iceman” Kazansky (Val Kilmer), his old rival and friend. Maverick’s been tasked with training the best of the best recent Top Gun graduates for a particularly dangerous mission. It’s actually an insane --- and surely suicidal --- request of these young pilots, who must maneuver their F/A-18 Hornets with exact precision at low altitudes and crazy speeds. 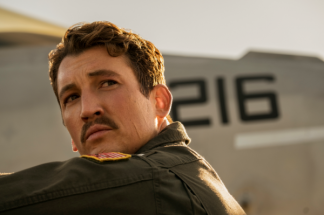 It’s not bad enough that the mission date is fast approaching, but Maverick also has to deal with a group of young elites who think he’s over the hill, until he shows them how very wrong they are. One of his biggest detractors is Lieutenant Bradley “Rooster” Bradshaw (Miles Teller), who is the son of Maverick’s former Radar Intercept Officer, Nick “Goose” Bradshaw, played by Anthony Edwards in the original. Maverick and Goose were best friends and Goose perished during one of Maverick’s attempts to prove his superiority. For obvious reasons, Rooster is not a fan.

Jennifer Connolly is on hand as Penny Benjamin, the local bar owner and single mother who knew Maverick back in the day, and now provides a new love interest for the aging flight instructor. But make no mistake --- TOP GUN: MAVERICK is all about Cruise and his masterful handling of these young heroes --- and just about any aircraft on the planet.

The training sequences are nerve wracking enough, but the actual mission is absurd. The action in TOP GUN: MAVERICK is so intense, at times I literally felt ill --- but in a good way. It’s a wild ride all the way through the film with just enough down time to prevent a serious case of hyperventilation.

Director Joseph Kosinski and his crew present a marvelously compelling reason to join the Navy and become one of its incredibly well-trained pilots. Cruise is never better than when he’s portraying this character, Maverick --- unless he’s playing Ethan Hunt in the MISSION: IMPOSSIBLE series.

Like the first film, TOP GUN: MAVERICK is a true Hollywood summer blockbuster --- deservedly so! And in a wonderful tribute, Cruise’s sequel is dedicated to Tony Scott, who directed TOP GUN, and sadly passed away in 2012.

And trust me when I encourage you to see TOP GUN: MAVERICK at a movie theater. I don’t care how big your TV screen is, unless you have IMAX at home, you must view it on one of those screens. It was filmed specifically for IMAX --- and it’s definitely worth the effort. 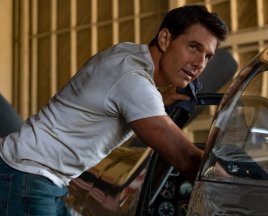 David:  TOP GUN: MAVERICK is as exciting as any movie in recent memory. To put that in perspective, many years ago, on a 15-hour flight to Australia, I watched the original TOP GUN three times. This sequel, 36 years later, is a richer movie-going experience.

Tom Cruise was not only born to play his character, Capt. Pete “Maverick” Mitchell, he also had a huge impact on the filming, particularly in terms of how his castmates were involved. A huge fan of aviation and a pilot himself, Cruise insisted that Miles Teller (Lt. Bradley “Rooster” Bradshaw) and the other actors portraying fighter pilots go through a rigorous program of learning the specifics of flying and how to deal with severe G-forces --- without passing out or vomiting in the cockpit.

Cruise refused the easy way out --- as was suggested by using CGI --- and the result is that we feel like we’re in the cockpits with these people. The best Navy fighter pilots actually flew the aircraft for this film, which is manifested in the astounding stunts they pull off.

Maverick is initially told by Navy brass that he will not fly on the dangerous mission they have in mind, but instead will train a group of younger pilots how to negotiate this most difficult assignment. It involves flying their planes at a ridiculously minimal altitude, and their task must be completed in 2.5 minutes. This would avoid the enemy launching surface-to-air (SAM) missiles which would shoot their planes out of the sky.

Rather than simply verbally explain this to the viewing audience, the filmmakers, including director Joseph Kosinski, utilize elaborate animation to demonstrate exactly what is required of the pilots. We see this several times during the movie, thus we can appreciate what it is these aviators must accomplish.

Maverick has a love interest, Penny Benjamin (Jennifer Connolly), who also owns The Hard Deck bar which caters to Navy personnel. Their relationship is handled well --- she is delightful in the role --- and is not a distraction to the overall importance of the mission. In fact, it is welcome down time opposed to all the action sequences.

The screenplay by a trio of writers, including producer Christopher McQuarrie, who also directed Cruise in his MISSION IMPOSSIBLE films, is plausible even though we know Maverick will ditch the classroom and end up as the team leader. Despite the protests of admirals portrayed by Jon Hamm and Ed Harris, Maverick gets his way. A more sympathetic admiral, “Warlock” Bates (Charles Parnell), proves to be a very likeable character. And I especially liked the low-key turn by Bashir Salahuddin as “Hondo” Coleman. Maverick’s relationship with “Rooster” comes full circle, as does his friendship with former rival “Iceman” Kazansky (Val Kilmer). As you’ve probably noticed, all the pilots end up with nicknames --- a.k.a. “call signs” --- which are associated with something unique in their lives or their fighter history.

The accumulated footage for TOP GUN: MAVERICK equaled that of all three LORD OF THE RINGS features, and it was left up to Eddie Hamilton to perform the incredible editing. The pulse-pounding music by Hans Zimmer and Lorne Balfe, and a huge assist from Lady Gaga, complete the soundtrack.

Edge-of-your-seat excitement is an overused cliché, but it fits perfectly here. If that’s your preference for movie entertainment, TOP GUN: MAVERICK is a must see on the biggest screen you can find.