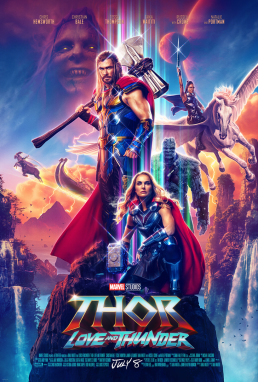 Jeanne: Okay, raise your hands, who wants to see Chris Hemsworth naked? Don’t get too excited --- it’s still a Disney movie. But yes, there is a scene with Thor standing before Zeus, played hilariously by Russell Crowe, completely sans clothing with a marvelous backside shot. For all the females out there, if thoughts of that vision don’t get your heart racing ---

THOR: LOVE and THUNDER, the fourth in the series, is a direct sequel to THOR: RAGNAROK, Taika Waititi’s wildly successful entry into the Marvel Cinematic Universe as director. Waititi is at the helm once again and has penned the screenplay along with Jennifer Kaytin Robinson.

He also voices Korg, Thor’s best friend, who narrates the God of Thunder’s back story in an effort to catch everyone up to where Thor is at present. Sending his Guardians of the Galaxy buddies on their way, so he can enjoy a brief respite of self-discovery, becomes short-lived when he learns that Gorr the God Butcher (Christian Bale) is systematically annihilating gods.

Realizing he’ll need assistance, Thor and Korg head to New Asgard to enlist the help of the new king, Valkyrie (Tessa Thompson), and who shows up but Jane Foster (Natalie Portman), his ex, dressed as the Mighty Thor and wielding Thor’s magical hammer, Mjolnir. Gorr has managed to kidnap all the children of New Asgard and it is up to Thor and his small team to bring them home. 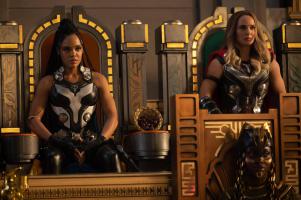 With the presence of Jane, THOR: LOVE and THUNDER isn’t just about the battle between good and evil. Love takes center stage in this movie as Thor realizes just how much he’s missed out on after he and Jane parted ways.

Now Jane has stage four breast cancer and every time she arms herself with Mjolnir it takes more energy than she has to give. Also, the running gag of Thor’s axe Stormbreaker being jealous of Mjolnir is absolutely delightful.

Hemsworth is simply too perfect as the Norse god. His unbelievable physique --- after losing his “dad bod” --- is amazing, yes, but it’s his self-effacing comedic timing that sets his god character apart. He and Portman share an envious chemistry, with her looking every bit as buff as he. She’s a wonderful addition to THOR: LOVE and THUNDER.

Bale, the consummate actor, captures the essence of the villain Gorr with mastery. He’s completely mesmerizing when on screen, especially during the fight filmed in black-and-white between Gorr and Thor taking place on a color-draining planet. Bale is brilliant --- along with the creative forces behind THOR: LOVE and THUNDER.

Waititi has brought a whole new level of zaniness to THOR: LOVE and THUNDER and it’s awesome. RAGNAROK was great, and now with Waititi also writing and Bale starring as the villain, this franchise has really stepped up its game. Add to all this a pair of screaming, flying goats and a few hysterical cameos and you have a summer blockbuster worthy of that title. And per usual, make sure you stay until the final credit for the latest MCU surprise.

David:  What does Chris Hemsworth have in common with Matthew Goode, Antonio Banderas and the late Paul Newman? Aside from them all being accomplished actors, the quartet is a big part of Jeanne’s all-time favorite list of gorgeous (her word, not mine) male movie stars. In Hemsworth’s case, starring again as Thor, God of Thunder, it doesn’t hurt that his chiseled body is even more so after 12 months of intensive training for this latest MCU venture called THOR: LOVE and THUNDER.

Battle scenes aside, the film is loaded with wry humor, thanks largely to co-writer and director Taika Waititi. Jeanne will talk about one scene in particular that is hysterical, but she will not, of course, reveal the details. Let’s just say that Thor is seen sans clothes and the reaction by certain extras is incredibly funny --- almost worth the price of admission.

Natalie Portman returns as Thor’s ex-girlfriend Jane Foster, but she now has the ability to wield Mjolnir, Thor’s magical and formidable hammer, earning her the title of the Mighty Thor. She worked hard to achieve the look of a physically strong female. Christian Bale plays Gorr the God Butcher. This particular villain holds a serious grudge against any god --- understandable given his motive --- and is determined to do away with all of them. Bale’s extensive makeup of gray skin and scars was so startling that Portman says the cast was all “a little scared” in the presence of Gorr on set.

Returning, or in some cases imported from the AVENGER series, are Korg, the humanoid made of stone and voiced by Waititi himself; Valkyrie, played by Tessa Thompson who has a new title, King of New Asgard; and smaller roles filled by Chris Pratt, Dave Bautista, Vin Diesel (voice) and Bradley Cooper (voice). Two new creatures that are destined to delight audiences are Toothgnasher and Toothgrinder. They are goats the size of Clydesdales and they earned guffaws from our screening crowd. 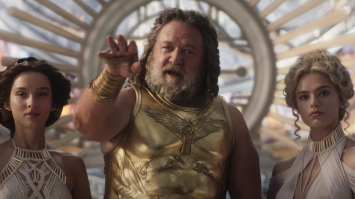 Hemsworth is much in demand as an actor, and rightly so. He can swivel from drama to comedy with great ease. The ladies love him, and men are not threatened by him --- at least I’m not. (How does a mere mortal compete with a god?)

Last but not least is Russell Crowe portraying a rather pudgy Zeus with hilarious results. The star of GLADIATOR and so many others stands out in an extended sequence opposite Hemsworth. Crowe is self-deprecating

and simply a joy to watch.

But new technology may be the real star of THOR: LOVE and THUNDER. It is called The Volume, assisting cast members by providing 360-degree digital environments in which they could concentrate on their performances in lieu of trying to do it all against a blue screen. Instead of having to imagine the sun baking their bodies, for example, they can see and feel it.

THOR: LOVE and THUNDER is entertaining enough. Unlike many other money-grubbing sequels, this film has a different feel and that’s coming from a moderate enthusiast of the Marvel Cinematic Universe. 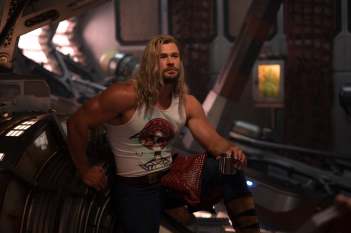