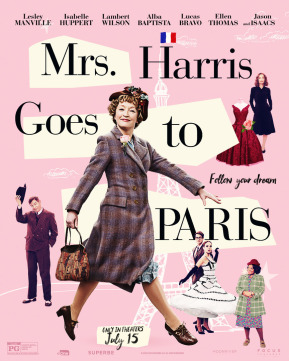 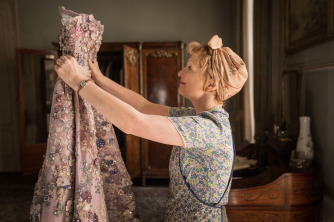 Jeanne: MRS. HARRIS GOES TO PARIS, based on Paul Gallico’s 1958 novel, is a truly charming, utterly delightful escape from all our present-day woes. Starring the sublime Lesley Manville as Mrs. Harris, the story of a cleaning woman obsessed with owning a haute couture Christian Dior gown in 1957 --- and her determination to get one --- is as enchanting as it sounds.

In post-war London, Ada Harris supports herself as a housekeeper. Her husband Eddie never returned from World War II, but she has her best friend, Vi (Ellen Thomas), a fellow cleaner, and Archie (Jason Isaacs), a bookie who hangs out at the same pub Ada and Vi frequent after work.

One of Ada’s wealthier clients, Lady Dant (Anna Chancellor), has recently returned from Paris where she purchased an exquisite Christian Dior dress. When Ada finds it hanging in Lady Dant’s armoire she is caught off guard by its beauty. It immediately becomes a goal --- she must have one for herself.

After several trials and tribulations to earn enough money, Ada finally sets off for Paris. But what is supposed to be a quick trip to Dior to buy a frock, becomes a life-changing experience, not only for Ada, but for those she encounters.

Isabelle Huppert also stars as Madame Colbert, the director of the House of Dior at 30, Avenue de Montaigne. She is horrified when Ada shows up with her pocketbook full of cash, assuming she can simply walk in off the street and buy a Dior original. It happens to be the same day as the fashion show for Monsieur Dior’s (Philippe Bertin) 10th anniversary collection. Huppert is the perfect choice as the unyielding keeper of the gate. She’s a formidable actor tasked with running a house of high fashion, albeit one with financial problems.

Fortunately, Ada is rescued by the very dashing Marquis de Chassagne (Lambert Wilson), who arrives in time to invite her to be his guest. The extravaganza of gorgeous couture features many beautiful models, but one in particular, Natasha (Alba Baptista), is the loveliest.

Once Ada has made her selection, a stunning crimson red number called “Temptation”, which has been usurped by a snobby patroness, she instead chooses a heavenly green one known as “Venus”. Then she learns that she must remain in Paris for weeks so the gown can be made exclusively for her. With not enough money to pay for a hotel, Dior’s handsome young accountant, André Fauvel (Lucas Bravo, “Emily in Paris” fame), who’s secretly in love with Natasha, offers Ada his sister’s room in his apartment. As the weeks go by, Ada’s resilience and determination affects not only her life, but everyone’s around her. 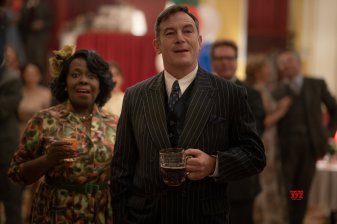 MRS. HARRIS GOES TO PARIS’s director Anthony Fabian has the enviable job of working with a top-notch cast. Manville and Huppert are such stalwarts in the industry and commanding on screen. They are a joy to watch. Baptista and Bravo are adorable and suitably matched. And the adapted screenplay he wrote with Carroll Cartwright, Olivia Hetreed and Keith Thompson is well conceived and completely endearing.

But let’s face it, a story about the House of Dior must boast spectacular fashions --- and sets. Oscar-winning production designer Luciana Arrighi’s re-creation of the Dior headquarters as it was in 1957 is amazing. The central staircase, salons and changing rooms are faithful to the originals and so incredibly lovely. They are a step back in time.

Christian Dior’s famous line in his memoirs “Dresses are everything to me.” would set a daunting challenge for anyone, but three-time Oscar winner Jenny Beavan mastered the opportunity. Working with representatives from Dior, she and her team designed a host of elegant gowns and other haute couture, creating an adult fairytale for those of us who truly love fashion.

MRS. HARRIS GOES TO PARIS isn’t just for those who appreciate splendid sets and costumes. It’s a story of hope, happiness, achievement --- and ultimately love. 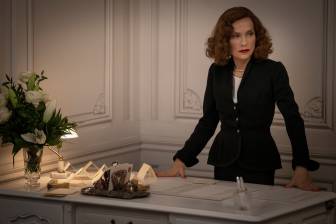 David:  MRS. HARRIS GOES TO PARIS combines two of Jeanne’s favorite entities: Paris and period pieces. The operative word to describe co-writer and director Anthony Fabian’s film is “charming”. And despite some improbable happenings which we can overlook, it is essentially an enjoyable fantasy.

At the center of it all is Ada Harris (Oscar-nominee and veteran actor Lesley Manville). A very capable cleaning lady in London with a wealthy clientele --- although at least one feigns money woes when it comes time to pay Ada --- she espies a Christian Dior original gown in a closet and decides she must have one. Although the cost of one Dior dress can be exorbitant, especially compared to Ada’s income, she manages to get enough money from various sources to visit the House of Dior in Paris and buy her own original. You’ll love the little aside of Ada betting on the dog races and her bookmaker friend Archie (Jason Isaacs) handling the wager.

Ada is a pistol of a character who likes to help people, even to a fault. This is never more evident than when she helps an up-and-coming young actress named Pamela Penrose (Rose Williams). Her act of kindness sets up the film’s heartwarming conclusion, but what an adventure she has on the way. And so do we, being privy to a runway fashion show with beautiful Dior models and a burlesque show of gorgeous dancing girls at the Moulin Rouge. The fashion show sequence allows Ada to meet the debonair aristocrat Marquis de Chassagne (Lambert Wilson) who intervenes when Dior’s icy director, Madame Colbert (Isabelle Huppert) does not believe an ordinary cleaning woman is fit to wear a Dior gown, even if she has the cash to buy one.

The Marquis appears to harbor romantic notions towards Ada, while she also manages to befriend others in the House of Dior, including its accountant André (Lucas Bravo from TV’s “Emily in Paris”) and a stunning model named Natasha (Alba Baptista). This pair has a romantic interlude of their own which is a bit contrived because there is little build-up to it, but who cares? 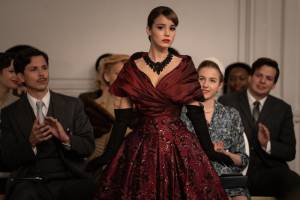 Fabian, an honored documentarian, has hired a pedigreed staff to help put this film together, including his costume designer Jenny Beavan, cinematographer Felix Wiedemann and production designer Luciana Arrighi. His co-screenwriters are Carroll Cartwright, Keith Thompson and Olivia Hetreed, who penned the script based on the first of the 1958 series of novels by Paul Gallico. One critical scene in MRS. HARRIS GOES TO PARIS has André meeting with Monsieur Dior himself when the company is in dire financial peril and 10 minutes later --- voila! --- problem solved. This seemed totally implausible but presumably it was part of Gallico’s storytelling. After all, I did say this was a fantasy.

Manville is a delight as Ada. She’s feisty, determined, sympathetic and believable. Ellen Thomas as her best friend Vi lights up the screen whenever she appears. And Isaacs makes Archie a totally likeable character. Even Madame Colbert has redeeming qualities, a tribute to Huppert’s veteran acting chops.

We hear “haute couture” repeatedly in this film. Fabian and the producers partnered with Dior in the making of MRS. HARRIS GOES TO PARIS, going to great lengths to portray this iconic fashion house in all its authentic splendor. 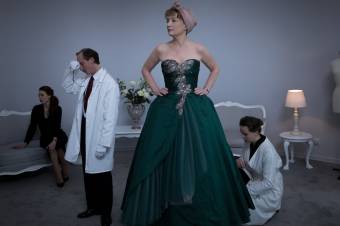