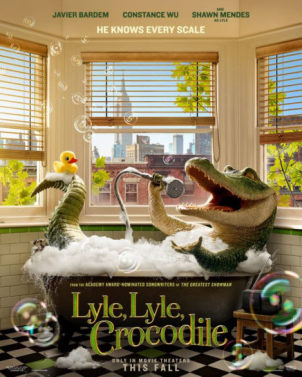 Jeanne: Based on the children’s book by Bernard Waber, LYLE, LYLE CROCODILE makes a very fun and entertaining movie-going experience for the kids. Not to say adults won’t enjoy it, because David and I did, but at the conclusion of our screening, it was the little ones who were clapping and cheering.

Magician and showman extraordinaire, Hector P. Valenti (a wonderfully exuberant Javier Bardem), is looking for a new angle for his stage act. He wanders into an exotic pet store and comes out with a singing baby crocodile. Hector takes Lyle to his home on East 88th Street in New York City, which has been in his family for generations.

As Lyle (voiced by Shawn Mendes) grows bigger, he and Hector work to perfect their song-and-dance performance. Hector uses his multi-level residence to finance what he hopes will be a huge success for the two of them. Unfortunately, what Hector doesn’t prepare for is Lyle’s overwhelming stage fright which renders him catatonic.

Hector loses everything and takes to the road, leaving Lyle alone in the house. When the Primm family moves in, including Joseph (Scoot McNairy), Katie (Constance Wu) and their son, Josh (Winslow Fegley), they are totally unaware that they have a crocodile living in their attic. Eventually, Lyle’s rumblings upstairs alert Josh and he discovers Lyle’s secret.

A fearful child with no friends, Josh immediately takes to Lyle’s confident ways. Together they scour New York City at night, dumpster diving for unique and delicious food discarded by the best restaurants in town. They are accompanied on their nightly outings by Loretta, the Primm’s loathsome downstairs neighbor, Mr. Grumps’ (Brett Gelman) cat.

When Katie and Joseph learn about Lyle, they are each alarmed at first, but come to love Lyle as much as Josh. Hector returns and plans another show to include Lyle, but Mr. Grumps finds out about a crocodile living in the house and has him captured and moved to the zoo. It is up to Hector, Josh, Joseph, Katie --- and Loretta --- to set him free.

LYLE, LYLE CROCODILE features an original score by Matthew Margeson and original songs by Benj Pasek and Justin Paul. The musical numbers are lively and fun, especially “Rip Up the Recipe” performed by Lyle/Mendes and Wu. Another highlight is Lyle taking a bath to the tune of Stevie Wonder’s “Sir Duke”.

The cast of LYLE, LYLE CROCODILE is solid. Bardem is particularly endearing --- and maybe just a tad over the top --- as Hector. He’s charming and delightful. Fegley is sweet and engaging --- giving Josh the right amount of cuteness without being too saccharine. McNairy has his own amusing scene with Lyle. Joseph was once a star wrestler, so the rather large crocodile challenges him to a playful match. The look on Lyle’s face when he glimpses Joseph celebrating his pin is priceless. And Lyric Hurd as Josh’s one school “friend”, Kara, is adorable. Watch for her in the future.

The CGI for Lyle and Loretta is terrific. Lyle’s face is so adorable and his eyes convey all his thoughts. But when he’s angry or in full protection mode, his roar is pretty ferocious. And he’s a great dancer --- just ask Katie. Loretta is hilarious with antics to match. A very spoiled cat, she is.

Directed by Will Speck and Josh Gordon (OFFICE CHRISTMAS PARTY, 2016 and THE SWITCH, 2010),  LYLE, LYLE CROCODILE is a colorful, enchanting and ultimately a great lesson for kids of all ages. Life is short --- accept and love those around you --- and go on vacation!

David:  Lyle the crocodile can sing but he can’t talk. Doesn’t quite make sense, but hey, this is a movie for small children. The kids at our screening gave LYLE, LYLE CROCODILE an appreciative round of applause, so this may very well end up their favorite childhood film.

It's all quite silly, of course, but no more absurd than movies with animals who do talk. Shawn Mendes, at the tender age of 24, is already a household name, at least with millennials, and he lends his considerable vocal talents to Lyle.

The married Primms, who recently moved to Manhattan, played by Constance Wu and Scoot McNairy, have fun with their roles, and their young son, Josh (Winslow Fegley), preaches to kids that friendship is more important than monetary gain. Josh is not popular at school but gains self-confidence via his relationship with Lyle.

Javier Bardem is Hector P. Valenti, a magician whose time has come and gone. He tries valiantly to entertain with card tricks and the like, but it isn’t until he runs into a singing baby crocodile that he dreams of taking this unusual act on the road. The problem is that Lyle suffers from severe stage fright. Ironically, Mendes himself has a stage fright problem to the extent he canceled a world tour recently.

Of course, we know Lyle will eventually find his courage to sing in front of a live audience, and --- Spoiler Alert --- when that ultimately occurs at the end of the movie it’s actually quite sweet. As for Bardem he looks like he’s having a grand time, but he does overdo it at times.

The other reasonably interesting character is the nosy, overbearing neighbor of the Primms and his grumpy looking cat, Loretta. Brett Gelman plays Mr. Grumps --- yes that’s actually his character’s name --- with the perfect amount of obnoxiousness. Loretta is hilarious and the feline’s facial expressions are a hoot. Speaking of which, the filmmakers give Lyle’s CGI eyes the perfect adjustments, so we know exactly what the big reptile is feeling. 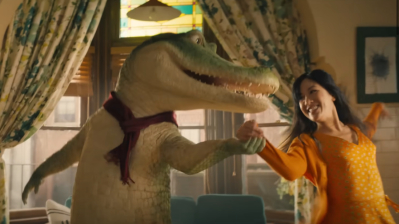