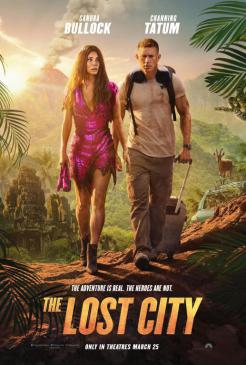 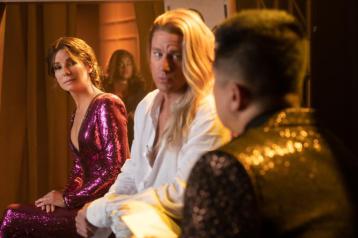 Jeanne: Sandra Bullock and Channing Tatum make quite the team in the new adventure romantic comedy THE LOST CITY. And the good news is not every funny scene is shown in the trailers.

Loretta Sage (Bullock), a successful romance novelist, hasn’t left her home in eons. Her beloved husband died, and she can’t seem to finish her latest book --- or get out of the bath tub. Her publicist, Beth (Da’Vine Joy Randolph), has arranged a book tour hoping it will get Loretta out of her funk --- and ignite book sales.

Her longtime book cover model, Alan Caprison (Tatum), who embodies Dash, the main character of Loretta’s sultry stories, is also along for the tour, much to Loretta’s dismay. But when she is kidnapped by Abigail Fairfax (Daniel Radcliffe), a batshit crazy billionaire, it is Alan who immediately takes off to rescue her.

Fairfax is convinced that Loretta knows where the treasure of “The Lost City of D”, from her most recent novel, is buried. He’s a tad upset because his brother inherited their father’s business --- and he is out to prove that daddy made the wrong decision. As the tagline explains, “The Jungle Isn’t Ready For This Kind of Action.”

Poor Alan isn’t the sharpest knife in the drawer, but he’s all in to save Loretta. He even recruits ex-Navy Seal, now CIA Agent Jack Trainer (Brad Pitt) to help, aware of his lack of the necessary skills. Though his role is not primary, Pitt is positively hysterical. 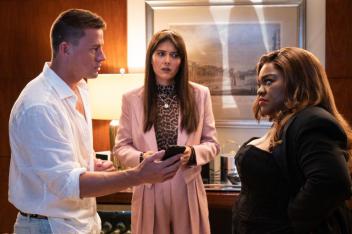 Seriously, why has no one paired Bullock and Tatum until now? They work so well together and exude a warm and believable chemistry. After one particularly perilous escape, they find themselves in a small village where they catch a little respite and enjoy some saucy salsa dancing. As we’ve learned from his MAGIC MIKE movies, Tatum can certainly hold his own on the dance floor.

Directed by Adam and Aaron Nee, who also co-wrote the screenplay with Oren Uziel and Dana Fox, based on a story by Seth Gordon, THE LOST CITY isn’t going to win any awards, but it will delight the masses. It’s fun and entertaining for the entire family, including the grandparents, which can’t be said for a lot of films these days. And at 112 minutes it isn’t too dastardly long. 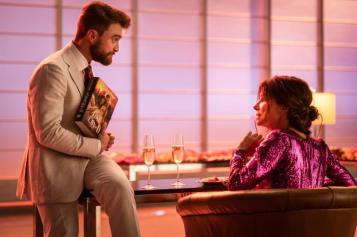 David: If you’ve been paying attention to the trailer for THE LOST CITY you know already that Sandra Bullock’s character, Loretta Sage, must remove leeches from the backside of her book cover model, Alan Caprison (Channing Tatum). The truly disgusting leeches cling to his body as the pair wades through the murky waters of the jungles in the Dominican Republic.

This one scene, although witnessed again and again as the trailer was viewed, is singularly the most hilarious scene in the movie. Loretta gags as she plucks the bloodsuckers from Alan’s back and it truly elicits belly laughs no matter how many times it is viewed.

A quartet of writers contributed to THE LOST CITY, including co-directors Adam and Aaron Nee, and one of the three, Dana Fox, penned the screenplay for last year’s truly awful CRUELLA. Not a resounding credit on her resume. 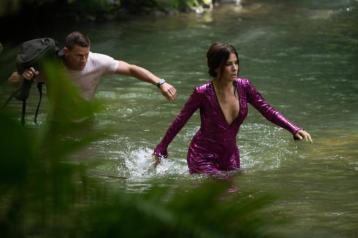 There’s no doubt that Bullock and Tatum make a great looking couple, and there’s no denying their chemistry.  Tatum’s best moment in THE LOST CITY has him preening on stage in front of an adoring crowd as Dash, Loretta’s book cover model for her immensely popular romance novels, until the unthinkable

The film does look great, including the small part played by Brad Pitt as a CIA operative brought in to help with Loretta’s rescue. Daniel Radcliffe as the immaculately wardrobed villain Fairfax adds even more levity.

Though I didn’t find THE LOST CITY as appealing as Jeanne, I can appreciate the efforts of all involved. 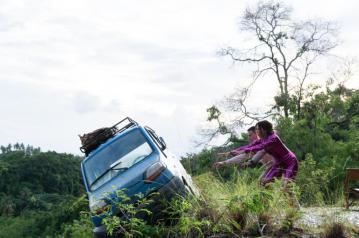