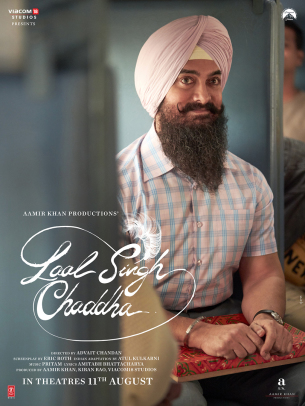 Jeanne: Filmed in over 100 locations across India, LAAL SINGH CHADDHA is a masterful retelling of the 1994 Academy Award-winning film, FORREST GUMP, which afforded star Tom Hanks his second Oscar for Best Actor. Here the title character, Laal Singh Chaddha, is played by Aamir Khan, a well-known Bollywood star who turns in a performance every bit as memorable as Hanks’.

Beginning with the floating white feather, LAAL SINGH CHADDHA sets out to duplicate the immense kindness and compassion of novelist Winston Groom’s GUMP, but with Indian twists. Instead of a box of chocolates and a bus stop, director Advait Chandan and screenwriter Atul Kulkarni’s version utilizes a selection of Golgappa --- popular Indian street food --- and a journey on a train.

As Laal opens his box of delicious edibles, he begins telling his story to a fellow traveling companion. As LAAL SINGH CHADDHA progresses, the size of his audience grows until many travelers have gathered, hanging on his every word.

Raised by a single mother (Mona Singh), who manages to care for her son and run a large farm, young Laal (Ahmad Ibn Umar) listens intently to his mother’s pearls of wisdom. And just like Forrest Gump, he will continue to share these with others throughout his life. He may not be as smart as the other students in his class at school, but his generosity of spirit lands him a best friend in Rupa, a proud, independent girl greatly affected by her father’s brutality towards her mother.

Laal and Rupa remain inseparable all through school, including university, where Laal becomes a track star showcasing his incredible talent for running. Rupa (Kareena Kapoor Khan) wants to become a Bollywood star, so she departs for Bombay. Laal, at a crossroads, is convinced by his mother to enlist in the army, where he meets his second-best friend, Bala Bodi (Naga Chaitanya).

And, it is during the Kargil War, a major event in Indian 20th Century history --- like the Vietnam War in FORREST GUMP --- where Laal saves the life of an enemy combatant, Mohammed Paaji (Manav Vij). Both Bala and Mohammed will play major roles in Laal’s life.

Umar, who plays young Laal, and Aamir Khan each render phenomenal performances. Just like Hanks, portraying an individual with mental limitations can be an incredible challenge. One misstep and the character can end up on a slippery slope to ruination. But that certainly doesn’t happen here. These two actors, especially Khan, are brilliant --- quirks, affectations, et al.

Kapoor Khan is simply divine as Rupa. Yes, she is gorgeous, but her spirit of determination is what sets her apart. Singh’s portrayal of Laal’s gentle mother guides us throughout this beautiful film. And what would any Indian movie be without its music? The original score by Tanuj Tiku adds a great deal to LAAL SINGH CHADDHA, along with original songs composed by Pritam Chakraborty.

Eschewing the common tourist attractions in India, Chandan chose sights he thought were ones where visitors “should be going”. And to write that they are spectacular is an understatement. One location in particular is Jatayu National Park in Kerala, which is the home of a gigantic statue of the mythical bird Jatayu. Every shot in LAAL SINGH CHADDHA is more breathtaking than the next --- and if you haven’t wanted to travel to India before, you will now!

LAAL SINGH CHADDHA is billed as a comedy/drama --- and just like FORREST GUMP, it is definitely both. Whether you saw FORREST GUMP or not, it doesn’t matter. LAAL SINGH CHADDHA is a treasure to behold and experience. Chandan and his amazing cast envelop the audience in a cocoon of warmth and love. And at two hours and 39 minutes, it’s oddly not long enough. 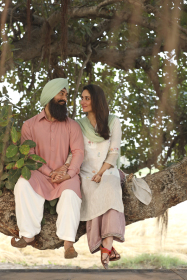 David:  When Jeanne arranged for our screening of this film, and I learned it was a remake from India of FORREST GUMP --- I scoffed. But I am no longer scoffing or questioning why. LAAL SINGH CHADDHA stands tall on its own merit. It’s a wonderful movie that will have you laughing, crying and not concerned about its running time of well over two hours.

I fear that regular moviegoers will shun this film because of its origin, or because it is subtitled, or that it will be dismissed because of its innocuous title. The latter is actually the name of the main character in an amazing portrayal by Aamir Khan, one of India’s biggest stars. In fact, the ensemble cast is impeccable, as is the writing, the music and the cinematography.

Laal is an intellectually “slow” young man in his twenties, brilliantly portrayed by Khan. The film opens with older Laal seated on a train sharing a compartment with a woman opposite him and several others. When Laal begins mumbling to himself the woman is quite annoyed. He soon brings out a box of Golgappa, crisp fried rounds of flatbread stuffed with comfort fillings and spiced water. The woman refuses this treat, but as Laal begins talking about himself, she and everybody else within earshot become eager listeners. 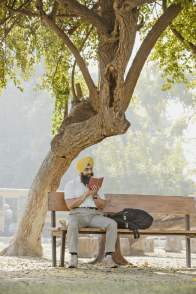 LAAL SINGH CHADDHA alternates between Laal’s early life as a young boy (Ahmad Ibn Umar) wearing leg braces and his later years when he enlists in the military to the present day on the train. Plagued by bullies in his younger years who view him as a “dimwit” and a cripple, he finds friendship with a sweet classmate named Rupa. They will become lifelong friends and maybe more if Laal has his way.

The adult Rupa is played by very popular Indian actress Kareena Kapoor Khan. She is marvelous as a young woman eager to make it big in the entertainment world. Laal is always there to support her despite her rejections of his frequent marriage proposals.

Laal’s mother --- or as he calls her “mummy”, even as an adult --- is played by Mona Singh. Her heartwarming performance as Laal’s ever-supportive, loving mom is a critical highlight of the movie. The other two major roles by Naga Chaitanya as Laal’s army buddy Bala and Manav Vij as enemy combatant Mohammed Paaji are vastly important to Laal’s story and expertly performed.

Every time someone steps up and offers their friendship to Laal we are reminded of the rejection and bullying he endured early on. This is an important reason why LAAL SINGH CHADDHA should resonate with viewers regardless of their culture of origin.

It’s still early, but I am contemplating that this movie will be India’s official entry for Best Foreign Film when the Academy Awards nominations are announced. And I see no reason, at this juncture, why LAAL SINGH CHADDHA couldn’t make its way into the regular roster of Best Picture candidates for 2022. 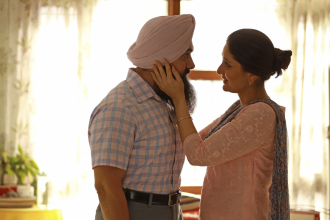