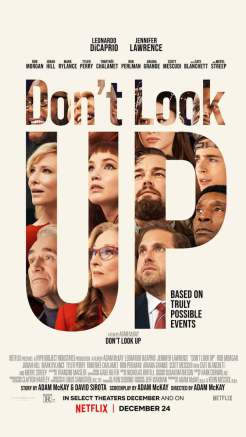 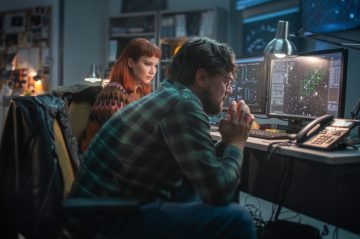 Jeanne: Writer/director Adam McKay has assembled a very impressive cast to populate his new --- and absolutely hilarious --- satire, DON’T LOOK UP. What happens when two astronomers come across a comet the size of Mount Everest which is on a definite collision course with Earth?

Leonardo DiCaprio stars as Dr. Randall Mindy, a tenured Michigan State astronomer whose gifted student, PhD. candidate, Kate Dibiasky (Jennifer Lawrence), discovers the massive comet and plots out the timeline of six months before it hits our planet. When they reach out to NASA, they are immediately flown to Washington, D.C. where they are met by Dr. Oglethorpe (Rob Morgan), one of the few who initially realizes the importance of Kate’s discovery.

The three of them are supposed to meet with President Orlean (Meryl Streep) who is too busy trying to get one of her major donors appointed to the Supreme Court, even though he’s not a real attorney. When Dr. Mindy, Kate and Dr. Oglethorpe eventually get their time with the president, her ignorant son --- and Chief of Staff --- Jason (Jonah Hill), is in the meeting and immediately pooh-poohs the catastrophe because Mindy and Kate are only from Michigan State. He wants the science checked by Ivy League astronomers.

President Orlean determines it’s too close to the midterms, so when she adopts the plan to “sit tight and assess”, Mindy, Kate and Oglethorpe know they have to go rogue and inform the public. The most popular morning show on TV, “The Daily Rip”, hosted by Brie (Cate Blanchett) and Jack (Tyler Perry), is the first stop on Mindy and Kate’s tour.

Unfortunately, Brie and Jack are more concerned about the breakup of Riley Bina (Ariana Grande) and DJ Chello (Scott Mescudi, a.k.a. Kid Cudi) than they are about the complete destruction of Earth in now less than six months. 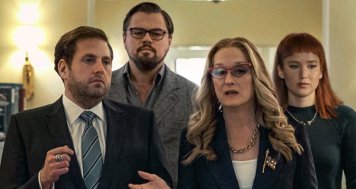 If any of this is ringing any bells for you, well, that is exactly what Adam McKay had in mind when he wrote this screenplay. DON’T LOOK UP was filmed during Covid and all the surreal politicizing

of the pandemic caused McKay to re-evaluate his script and make it even more absurd. Dark comedy such as DON’T LOOK UP has very few limits, which is good, especially when considering what everyone on this planet has been through the last few years.

Months go by with no one specifically addressing this horrendous situation. People who believe the science --- and by now this includes all the Ivy Leaguers ---are left wringing their hands. Those who don’t, think the threat is a hoax --- sound familiar? It’s truly amazing how spot on McKay is with his depiction of the current status of this country --- amazing, and yet truly terrifying.

With such a star-studded cast, it’s difficult to pick a winner because they’re all terrific. The actors were given leeway to improvise with McKay’s script and apparently Hill had some doozies. It was his idea for Jason to carry around a $30,000 Birkin bag for the express purpose of having the nuclear codes always at hand. DON’T LOOK UP is full of minor funny details such as this that keep the audience laughing.

Mark Rylance plays the quietly arrogant and slightly smarmy billionaire Peter Isherwell. He’s such a great actor and he takes full advantage of McKay’s direction. He is instructed as Peter not to make eye contact with anyone, which serves to compound Peter’s superiority complex.

Yule, a Gen Z character, is portrayed by Timotheé Chalamet. His creative addition to McKay’s script is one of the best moments of the movie, but I’ll let you guess what it is when you see DON’T LOOK UP.

As David and I have written many times, comedy is purely subjective. And it’s the most difficult genre to pen. But McKay’s screenplay is biting, sardonic with more than a few laugh-out-loud moments.

Watching Leonardo DiCaprio play a nerdy, slightly overweight scientist who repeats mantras to himself in the mirror and Streep as the female version of a former occupant, complete with bad hair, is worth the price of a ticket. 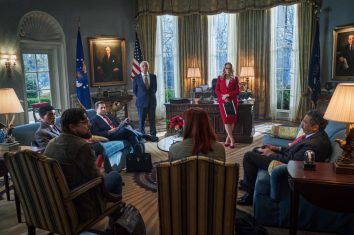 David: British astronomer Edmond Halley is best known for the comet that is named after him, the one that appears visible to the naked eye about every 75 years to us Earthlings. As celestial bodies go, Halley’s Comet is pretty innocuous. But one of the main scientists in the new film DON’T LOOK UP --- Kate Dibiasky (Jennifer Lawrence) --- also has a comet named after her. The big difference is that hers is on a collision course with Earth roughly six months after she spots it.

Another character in the film, a newscaster named Jack Bremmer (Tyler Perry) on The Daily Rip, a fictional morning show, wonders aloud if Dibiasky’s Comet could destroy a house upon impact. He then jokes about it possibly hitting his ex-wife’s home.

But the facts are clear, according to Kate and her mentor, astronomer Dr. Randall Mindy (Leonardo DiCaprio). Her comet is about six to nine kilometers wide --- equivalent to, say, five miles in width --- or put another way, as large as Mount Everest. So yeah, Mr. Bremmer, keep things light on the air.

Unfortunately, when Kate and Mindy go on a media blitz to convince Americans --- and the rest of the world --- that this is a “planet-killing” event, they are met with mostly apathy. But fortunately for us moviegoers, DON’T LOOK UP is a sublime comedy created by writer/director Adam McKay (THE BIG SHORT, VICE). 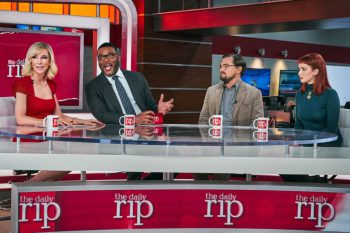 Surely there have been other disaster films where the public either doesn’t believe or doesn’t care about impending doom. But those movies did not contain the star power of DiCaprio, Lawrence and Perry. The rest of the name cast includes the likes of Cate Blanchett, Jonah Hill, Mark Rylance, Timotheé Chalamet and Ariana Grande. Oh, and let’s not forget Meryl Streep playing the first female chief executive of the U.S., President Orlean.

While the laughs come fast and furious, mostly in the first half of the film, there is a tinge of irony or perhaps even sadness once we realize the storyline is a parody of the last few years. The wonderfully bizarre finale to this most unusual picture would be poetic justice for a corrupt group of politicians we have come to know.

DiCaprio is the perfect foil for this dark comedy. His Dr. Mindy seems always on the verge of a major heart attack given his frustration convincing people about the event that is on the horizon. Lawrence has always demonstrated comedic chops and she is a delight to watch in DON’T LOOK UP. Hill plays to perfection President Orlean’s spoiled son Jason, who is obviously modeled after another president’s obnoxious offspring. And Rylance, utilizing a high-pitched squeaky kind of voice, is wildly entertaining as Peter Isherwell, a totally crazy billionaire.

However, it might be Blanchett who steals the show as the sexy, teasing, co-anchor who takes a strong liking to Dr. Mindy. Chalamet has a smaller role as Yule who falls hard for Kate. And Paul Guilfoyle (of “CSI” fame) is an army general who charges Kate and Mindy for snacks that are actually free if you’re visiting the White House. This becomes a running joke that Kate can’t let go despite the comet enroute to Earth.

DON’T LOOK UP is diabolically funny, but we don’t have to look too long or hard to see the satirical intent. It’s a gem that will be talked about for a long time. 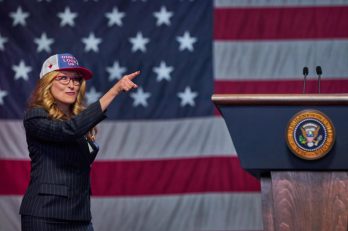