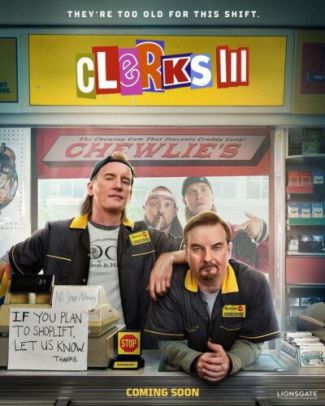 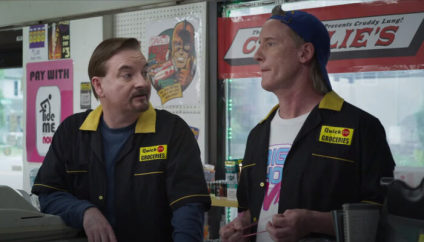 Jeanne: If you are a fan of CLERKS (1994) and CLERKS II (2006), then you will most likely find CLERKS III delightful --- and poignant. Writer, director, producer and editor Kevin Smith and his fictional universe, View Askewniverse, named for Smith’s production company, is once again featured in this latest offering in the series.

Dante Hicks (Brian O’Halloran) and Randal Graves (Jeff Anderson) are still hanging out at the Quick Stop they purchased together at the end of CLERKS II. Now 16 years later, the bloom is off the rose and these two are stuck in a boring world of their own making.

Consequently, when Randal has a massive heart attack at the store and almost croaks, he begins to take stock of his life and decides he needs to make a movie about his --- and Dante’s --- life at the Quick Stop. Calling it “Inconvenience”, it’s essentially the original CLERKS. 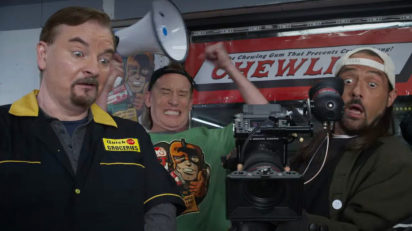 Per usual, Randal, the role Smith originally wrote for  himself, gets the funniest lines, but Dante has an opportunity to shine in a rage-filled rant near the end of CLERKS III. Smith, who suffered his own life-threatening heart attack in 2018, mines a great deal from his own experience. One of the funnier lines has Randal comparing himself to a “retail Richard Linklater”, also the director of a three-part series --- among many other incredible

Smith is on hand again as Silent Bob, sidekick to Jay (Jason Mewes), who along with Elias (Trevor Fehrman) and his tagalong, Blockchain Coltrane (Austin Zajur), provide fodder for Randal’s filmmaking. Becky (Rosario Dawson) also makes an appearance, though not for what fans may be expecting.

Despite all of Smith’s success in the past creatively, CLERKS III starts off very slowly with little to no laughs. It isn’t until after Randal’s near-death experience that the humor content improves. Will that matter to his most ardent fans? Probably not ---

David and I will never forget watching CLERKS in 1994. Our 21-year-old niece --- a beautiful, very quiet young

lady --- was visiting and helping with our one-year-old daughter. We rented Smith’s effort from Blockbuster thinking a comedy would be fun. Yikes! As the movie played, we couldn’t even look at her. I was mortified, though it was damn difficult not to laugh. Those memories just refuse to fade. 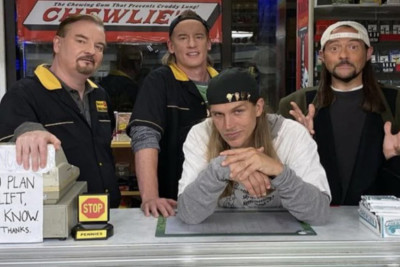 David:  The original CLERKS will always be the standard for raunchiness as far as this franchise is concerned. Jeanne and I will not soon forget watching it with her 21-year-old niece, not anticipating the embarrassingly foul script.

Still, CLERKS III is funny in its own right, anchored by original cast members Randal Graves (Jeff Anderson) and Dante Hicks (Brian O’Halloran). They are still running the convenience store called the Quick Stop which they bought at the end of CLERKS II. 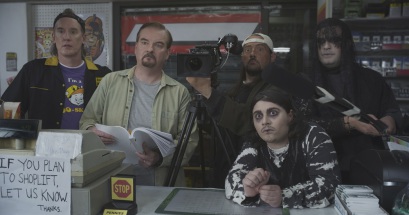 Writer/director Kevin Smith is up to his old tricks of trying to shock his audience. He again appears as Silent Bob, Jay’s (Jason Mewes) sidekick. Cameos by celebrities, led by Ben Affleck, are a fun addition. At nearly two hours, however, the film stays around a bit too long.

CLERKS III picks up momentum after a sluggish start when Randal suffers a major heart attack. He decides he needs to make a movie about their lives, which leads to some fast-paced humor. Aside from the usual bad language, however, the dialogue has been somewhat cleaned up, so maybe we’ll make a date to watch it with our now much older niece.